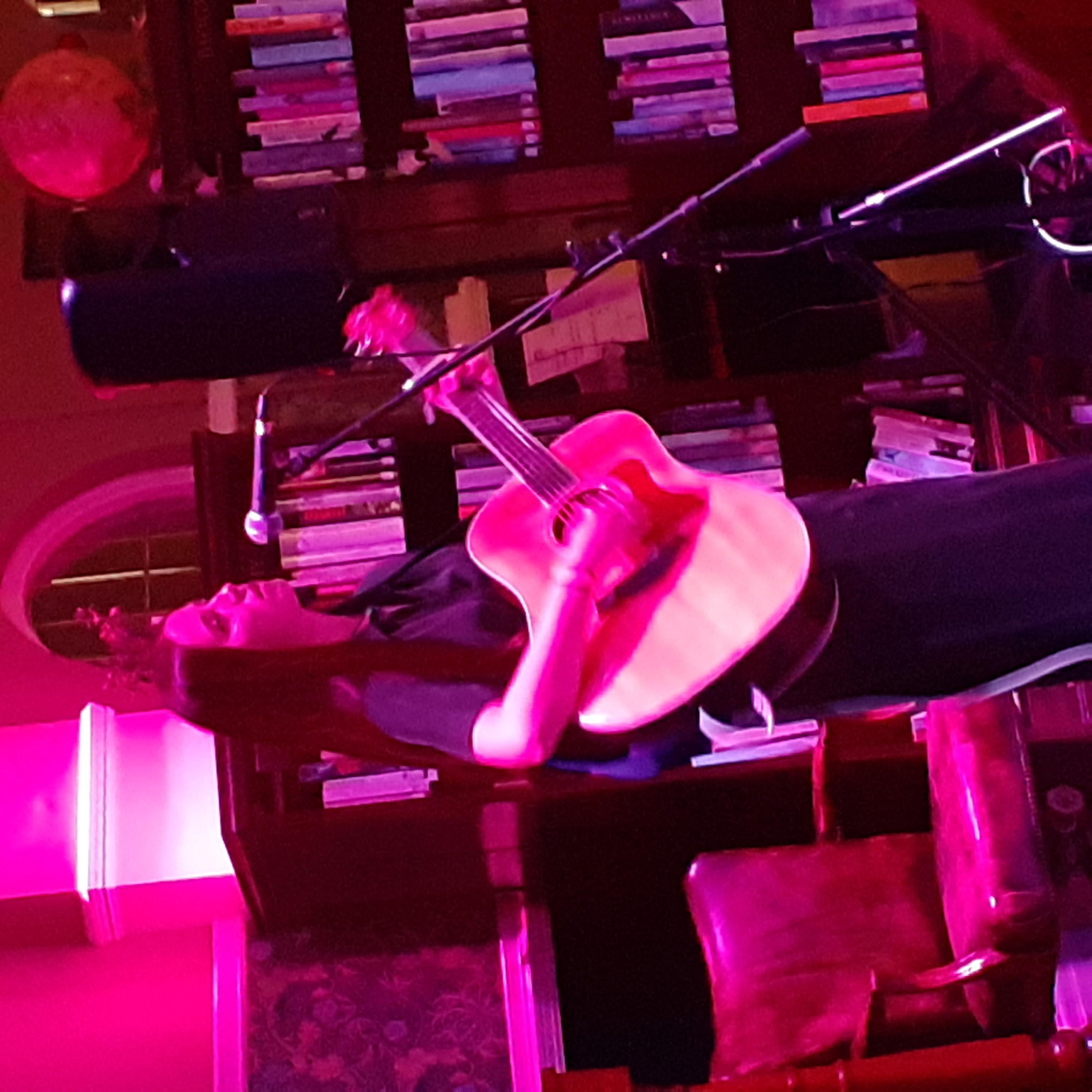 Last evening at Earlsdon Carnegie Community Library saw the "Hush! A Summer Celebration" event, another in the series of collaborations between the Library & "Hot Music Live Presents" and the first one since the announcement of the Library's national recognition in the shape of the Queen's Award for Voluntary Service: a marvellous & deserved accolade for the success of Julie Rubidge, Lucy Winter & the team at the charity which now runs it in rescuing the Library from closure, restoring it to glory & promoting such a range of community focused events including "Hush!"

Showcasing a range of artistic skills including music, the evening was another highly successful one, opening with Force of Love (Spiros Abatis) who offered us fruits of his creativity in two distinct formats: music & poetry.

This act was something of a revelation for me: recommended by Izzie herself (and he's also worked with Joe as it happens), I hadn't previously seen him perform and he is certainly a very dynamic & arresting showman who delivers his material in a way to stimulate audiences.

If you check out his work online, you may well consider his starting point to be the more experimental end of music, but this really doesn't mean that it's so avant garde that it's inaccessible. The forms are easily engageable with & can be enjoyed on an immediate level, though it's clear how important the content & message are to him: close attention to the words brings additional rewards.

His guitar playing (he admitted to being at the loud end of the acoustic spectrum) had many flamenco aspects to it & was an interesting mixture of the instant & the melodic. How words were passionate & gave some sort of clue to the name for his act: the concept of Love permeated the songs and poems whether for each other or the world we inhabit.

I am not sure when I last witnessed a poem of such length being recited (though given the nature of his performance "enacted" might fit the bill more closely) without error: quite an achievement & one which consequently had a proportionate impact on the audience. A second one, also as arresting in scope & imagery was one he was working on so I think we'd all readily accept his need to read more of that one out from the text.

I gather he'd not performed for around three years, but judging by his act & the reaction, any potential rustiness was blown away & I hope to catch him again.

The second  item on the bill was a look at the novel writing of local author J T Wilson who gave two readings from his most recent release "Impossible Animals: or Other Outstanding Attractions" and answered questions from the audience and a handful from me on both this book, his earlier "Cemetery Drive" and his craft in general.

I wasn't sure how comfortable the audience might be in terms of asking questions (hence my preparation of a lot of my own just in case) but I was delighted to be reassured. Stimulated by the readings: which were dynamically performed with the experience and skills of someone used to the stage, there were effectively no barriers to break down & we went straight into a discussion of cryptozoology without any need for prompts etc: if the audience had not previously been familiar with the concept, they picked it up instantly from the reading. In fact so impressed with what they saw, two separate audience members suggested that Joe take this performance to the Edinburgh Fringe: an idea I suspect he'd not considered beforehand but took away as food for thought.

Many readers will have been aware of Joe's work as a musician: featured in this magazine & in several incarnations on various volumes of "Hot Music Live Presents". How that writing interacted with his prose writing was another area those present were interested in exploring & he gave detailed accounts not only of how the different modes offered distinct opportunities to express himself, but also on his writing technique: he brought along a notebook in which initial vignettes and passages were conceived (in longhand!) and recorded for later combination into longer work and how elements of Pop Culture were so ubiquitous in his writing.

The headlining act, Izzie Derry will need no introduction to most readers of the magazine as we have covered her releases & gigs many times. However, although her EP launch at The Tin in March 2020 was literally the last live performance I saw let alone reviewed for a long time, it's still over two years since I've caught one of her gigs.

And to take the theme of her closing song "Learn To Grow", her music has evolved in that period (knowing Izzie that's not a great surprise). I don't actually mean that her new material is a development (she took time out from recording her latest album to play this gig), though the evidence supports that. Izzie has mainly written the new songs on piano and as performing on that instrument last night wasn't very practical, we got a mostly older set of guitar compositions (and so got the classic Izzie show of continuous swaying motion which is so charismatic yet hard to photograph) and it is these which have developed.

I mentioned some years ago when she unveiled her full band lineup how powerful her sound had consequently come (and at that point she started playing a Telecaster on stage) and that certainly informed recent releases which were with her band. That makes perfect sense I hope: what wasn't so predictable was the residual effect on her solo acoustic back catalogue.

At one point last night she suggested that her songs could broadly be categorised as "sad" or "angry" (and I'm pretty sure I'd not really grasped that in any of my reviews: not least due to the beauty which to some extent distracts from that) and to a significant degree the latter has predominated in her more recent writing (I gather that it would be true for much of the new album too). Thus I was perhaps not too surprised when a song as stunning & powerful as "Fire" which is definitely an "angry" one came across as compellingly in a solo version as the band one I'd only ever previously heard her play it live: what hit me more was an even earlier song such as "Give Me A Reason To Stay" whose angry undertones are now much more to the fore: transforming my understanding of the song (which has been in my awareness for at least five years).

Generally that dynamic applies to the changes Izzie has wrought & impacts in various ways: songs have certain elements of menace in their playing with more ominous riffs and even more ominous dramatic pauses. Her voice too has evolved: still confident in her upper register which has always been a characteristic of her singing, now her lower range is coming to the fore more: perhaps stimulated by the changes in writing style, or maybe to some extent exploration: when I raised the issue with her afterwards, she primarily credited a desire to refresh the older material with any changes she had made to performing it.

That said, Izzie has written two songs on the guitar for the new album & gave us our first chance to hear one live and it was a most potent one: definitely from the "angry" category and delivered appropriately. I gather that much of the album is in this mode & apparently informed by personal experiences: I did raise my condolences with Izzie at having gone through negative interactions in this manner, but her response was that at least she got some powerful songs out of it, so if she can process them so positively then I think we can just sit back & enjoy her artistry without too much angst on her behalf.

What we are getting is a tendency not to mince her words nor hold back lyrically: I don't think anyone will be mistaking her messages. That said, it's Izzie Derry we are discussing here and though her gloves may be off these days, the result is not mindless abuse but considered reproaches to those who've wronged her & a disinclination to demean herself by sinking to their level: above all she's not abandoned the compassion & humanity of her work and it now sits alongside defiance.

Izzie Derry on solo acoustic guitar is a stunning live act in such a beautiful & intimate space which actively rewards her sound & strengths & the audience were greatly moved by what they experienced. However great last night was, I wonder how often we'll be getting to hear it in the future? Given her live work in recent years & the nature of the new album, it's hard to imagine solo gigs like this being the norm: and that's fine by me as I'm glad she's moving on & developing her potential. That such nights have a special magic is undeniable & if you've never caught one, I suggest that you take advantage of others she might play. Equally Izzie is clearly (however much she is still beloved in Coventry & Warwickshire) a more national name now: she has a professional & personal base in Brighton is playing all over the country, building a wider audience: no wonder her album will be funded by her successful Kickstarter campaign.

Her next local gig is on 29th June for Sofar Sounds & I assume that will be a solo performance too….

I do like being taken be surprised by music (to be honest I'm not sure I enjoy reviewing music which fails in some way to do so) and I hope I am ...
[1 image] END_OF_DOCUMENT_TOKEN_TO_BE_REPLACED

If you are anything like me, among the myriad challenges to our communities currently being presented, the probable curtailment of live music for ...
[4 images] END_OF_DOCUMENT_TOKEN_TO_BE_REPLACED

One conundrum I face with reviewing the calibre of artist I tend to focus on (it's an enjoyable challenge really) is how to handle it when ...
[1 image] END_OF_DOCUMENT_TOKEN_TO_BE_REPLACED

It's odd: the more reviews you write, the more patterns emerge.
[1 image] END_OF_DOCUMENT_TOKEN_TO_BE_REPLACED

December 12th is a date many people have possibly been looking forwards to or dreading for various reasons.
[1 image] END_OF_DOCUMENT_TOKEN_TO_BE_REPLACED

I find myself here writing a review which I had never anticipated.
[1 image] END_OF_DOCUMENT_TOKEN_TO_BE_REPLACED