"Penthouse Complex" by The Eyes of Isabel


"Penthouse Complex" by The Eyes of Isabel 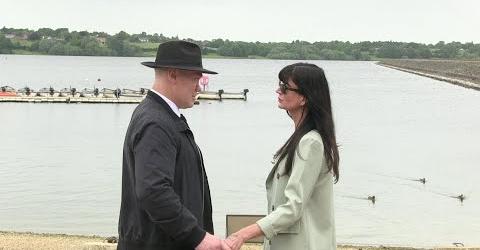 Fresh out from The Eyes of Isabel is their latest dramatic piece, "Penthouse Complex".

Created as ever at Woodbine Street Studio with Eddy Hewitt on guitar, bass & drum programming, John Rivers on backing vocals (and I imagine keyboards too) and Sam from The Ripchords on additional guitar, as ever presentation of the finished song in a cinematic medium is vital to writer, founder & lead vocalist Tony Ally & so I advise you to access it first via the usual Andy McGeechan directed video via this link: https://www.youtube.com/watch?v=wJI4bmJhmqQ

This stars Rob Millar, Tracey Gillan, Tony Ally, Tracey Skarzynska, Lyndsey Joplin & Wendy and was shot at Draycote Water, Tile Hill South, Yarmouth Gardens, Canley, Allesley Park, The Slug & Lettuce, Cuckoo Lane & Belgrade Plaza Car Park and extends the sybaritic lifestyle depicted in the song into something definitely less legal and in keeping with other films in this series, resembles a caper movie with the penthouse denizens eventually bought to book. Taking weeks to prepare & then a fortnight or so to shoot, the end justifies the effort taken.

Nevertheless, the song, while not going quite as far down that route, makes its disdain for those living selfish lives & isolating themselves from the rest of humanity clear, in the nicest possible way.

Musically it's an interesting & catchy concoction which opens with a "Sergeant Pepper" introduction which morphs into something nearer to the Television Personalities in style while throwing in another "Pepper" interlude in Indian mode en route.

"Got To Be With You" by The Eyes of Isabel

Out now is the new single "Got To Be With You" from The Eyes of Isabel.
[1 image] END_OF_DOCUMENT_TOKEN_TO_BE_REPLACED

Last month, I caught up with John Rivers at Woodbine Street Studios and shared some of his enthusiasms with you.
[1 image] END_OF_DOCUMENT_TOKEN_TO_BE_REPLACED