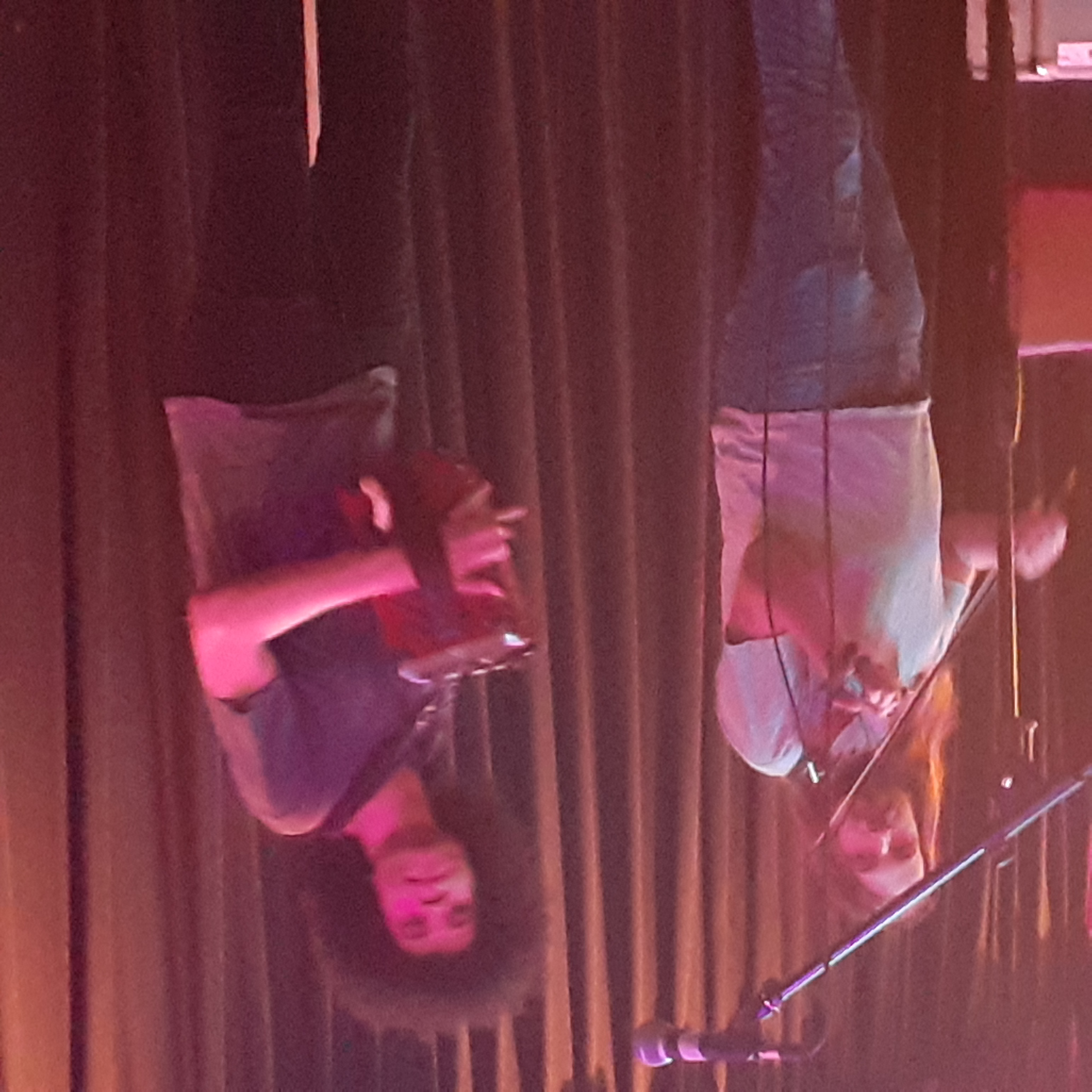 Thanks to (adverse) fate, I've not actually written about a live Greg Brice gig in the magazine before, which is quite embarrassing given his status as one of the most accomplished local blues guitarists & writers. One track (not really representative of this side of his talent) called "Tonight Matthew" by his group Fallow Man appears on ‘Hot Music Live Presents Volume Four' but with the approaching (he's hoping for September) release of his debut solo album, we'll have recorded examples of his craft to share & review in addition to this account of last evening's set at Stratford Playhouse Folk Club.

Sticking exclusively to a single acoustic guitar (nevertheless retuned as required) for the night, Greg demonstrated why he has the reputation he has: he's as good, if not even better than the tales you may have heard.

What impressed me, as it does with those who share this trait, is how Greg uses his skills & virtuosity to serve songs & his creativity: there is no grandstanding nor tedious extended soloing.

What also intrigued me is his style: at least as exemplified by what he played last evening: most songs, despite many being contemporary original compositions or covers of later-written material, had a 1920s feel to them: it's a distinctive move & one which I think pays off as it separates him from other excellent blues musicians. Although there were dips into this source era, most of his set was from his upcoming album (which by the sound of it is a tasteful balance between respect for the traditions of the genre while refreshing it with lyrics tackling contemporary concerns & indeed his own biography) and stripped back as the tracks were in this context (I am looking forwards to the full arrangement of a gospel number in particular), each had its own unique character. Equally the covers added points of interest and novelty from an opening intricate Chet Atkins instrumental (and of course he wasn't a blues writer as such) to excellent & original reworkings of more well known tracks such as Professor Longhair's "Tipitina" (originally a piano piece)  or Ray Charles' "Hallelujah I Love Her So".

At this point, you're presumably expecting a review of headliners the award winning Granny's Attic. And so was I. Unfortunately, guitarist George Sansome had been taken ill, thus reducing the lineup by a third. Remaining members Cohen Braithwaite-Kilcoyne (melodeon, concertina & vocals) and Lewis Wood (violin) might have been forgiven for tendering their apologies given the apparent impossibility of rendering their intricately crafted arrangements with such a high percentage of the elements missing. Not so: to their immense credit, they honoured the gig & rather than disappoint the audience or let them down with inadequate performances of the material, offered a solo set from each of themselves instead. Although each drew heavily on their own previously released solo albums for this purpose, neither could have been terribly prepared let alone rehearsed for this eventuality & that neither seemed to forget anything nor make errors under such semi-improvised circumstances is a tribute to their skills as much as doing what they did is one to their commitment: and for which public thanks are appropriate.

Lewis (who sounded less than well himself) turns out to have a solo act based (unsurprisingly) around solo violin and spanned a far old range of traditional hornpipes, step dances etc from across the country with quite a few self penned tunes.

Cohen also had an encyclopaedic knowledge of folk songs (none of which I'd ever heard before & most of which were downright peculiar in words, structure or both) as well as a charismatic stage presence. What was delightful however was how far off the folk piste he ventured: into the work of Scott Joplin & Vesta Tilley (it's true!) for example.  Both seemed to revel slightly in being "allowed" to play material which would never have been in a Granny's Attic setlist & both sets were therefore excellent showcases for their personal enthusiasms as well as broader skills. It's always superb to witness musicians with love for what they play & an eagerness to explore music & it's commendable that this is Doug Armstrong's booking policy for the club.

So we actually got, instead of the anticipated set, something much rarer & that I think makes up (more than makes up?) for any sense of disappointment: that said, despite their planned strategy, they gained the confidence during the night to (re)combine at the end for two guitarless renditions of tracks from the latest group album. At this point there is a huge trap for the poor reviewer as both sounded so good that one is tempted to say they sounded fine without the guitar: but I'm betting that they sound even better when it's there. We also got a glimpse into the dynamics of the band when they got together at the end: where both had (understandably) been quite static playing solo, concentrating hard on the performance, they both bounded around when together: a glimpse of what might have been & no doubt will be again & reflecting their underlying glee for what they do.

So: a gig which only partially matched its assumptions & expectations yet ironically not in a way which can ultimately be held against anyone: in fact what we got instead probably exceeded some of them & personally I'd take witnessing a unique gig (if it's this good of course) any day. Though that it was illness which caused this, is unfortunate & we wish George a speedy recovery so they can revert to Plan A.

Last evening's Stratford Playhouse Folk Club meeting was as intriguing a juxtaposition of two talents as its predecessors.
[5 images] END_OF_DOCUMENT_TOKEN_TO_BE_REPLACED

Having reported on last month's inaugural Stratford Playhouse Folk Club gig, I was delighted to make its follow up as well.
[8 images] END_OF_DOCUMENT_TOKEN_TO_BE_REPLACED