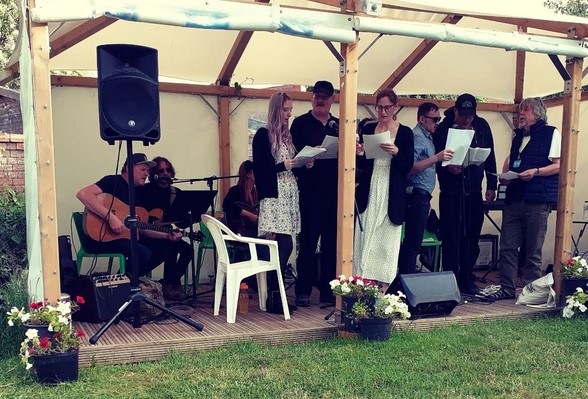 As you'll know from previous writing in the magazine & the inclusion on ‘Hot Music Live Presents Volume Eight' of "Wake Me Up Tomorrow", the title track from the second album from Street Arts Project , I'm an admirer and supporter of this Stratford based organisation working with the homeless and vulnerable citizens of that town.

So I was delighted to be invited last evening to a celebration of their work at the Lifeways Garden: an idyllic spot for some fine June evening music as part of a "Midsummer Gathering" organised by the Art Rising Collective.

I must first of all emphasise that the focus of the event was the performance of a group of seven of the project members: none of them trained musicians. It was their ideas & stories which gave birth to all the songs we heard & those on the albums.

Professional musicians who support & enable the writing were there too: Nigel Clark (on rhythm guitar), Jack Blackman (lead guitar) and Katherine Abbott (bass guitar) & their playing anchored the songs and in Jack's case he added the occasional tasteful fill or short solo to give songs a little variety & texture: however they literally took back seat to the project members: you could barely see them on the stage. (The other long term member of the team, Wes Finch, unfortunately could not be present as he was on a pilgrimage of his own).

You might expect the group members to have mainly concentrated upon singing, but some also contributed guitar & keyboards.

Considering that few of them had performed on a stage before an audience, their confidence was most impressive (and I guess building such a quality is one of the purposes of the project) and project founder Doug Armstrong commented to me how impressed he was that they all came in at the right times so well. I wonder therefore what exactly was going on here: could this be a little less of instilling new skills in people & more of unlocking existing innate musicality which had been allowed to remain dormant by their circumstances?

Perhaps even more impressive were the actual songs. Firstly, one might expect novice songwriters to cling to the familiar & create songs similar to ones they knew already: but I honestly didn't hear anything which reminded me of a well known song.

This may in part have been due to the nature of the lyrics: really strong & purposeful, usually commenced by individuals & then developed collectively, and often painfully honest, telling of fear of violence on the streets, episodes of worrying about others and especially one which defiantly stated the writer's "own truth" in the face of that of others. Yet for all the inevitable negativity within the stories themselves, most songs were also ultimately optimistic to some degree: not necessarily in a mindless & unrealistic way, but in small ways which can be made to come to pass, especially through the agency of the writers.

What is also very well worth pointing out is that the vast majority of the songs played were so new that they do not appear on either album: this is a dynamic group moving forwards at a pace: of the couple of previously released songs which did make the setlist, I was delighted to hear "Wake Me Up Tomorrow" and their "theme song" "All Gonna Get There In The End" (from the debut 'Hope' album) which saw Doug join the performers on stage.

It would be remiss in finishing not to mention the partners of Street Arts: many of whom were represented last evening. Not only is the partnership between group members & professional musicians essential, but the project itself, like many such working in the community, could not carry out its work without linking with the likes of: Stratford Town Trust, Stratford upon Avon Foodbank, Art Rising Collective, Escape Arts, the hosts of the evening Lifeways, Copernicana (a local Polish community group) or Socks & Chocs The succinct speeches by Doug & fellow project founder Jackie Lines also helped put everything into context & draw a clear picture of how the various organisations & initiatives worked together.

Everyone present was an epitome of the spirit of the project: delighted for the participants & genuinely appreciative of the music. I imagine that one worry for them is that responses might be patronising to some degree: well that wasn't evident last evening nor can it be found this end. The songs are original & powerful in their own right. They deserve a listen as they are the voices of people too frequently denied one & whose perceptions & perspectives are as valid as anyone else's and often stronger: personally speaking I would compare their writing ability & courage in getting up on stage for the first time with my own: and that adds to my respect.

These are good writers right now: where they will each take that, who can say. It would be good if this could have transformative effects. In terms of performance skills, they have at the moment further to travel: the strength & support of the collective helped a lot last night as it tends to in life generally. It would be great if for some or all of them, this was the start of another journey in that respect.

In the meantime, judging by what we heard, there presumably will be a third album in due course.

If you would like to support or get involved with Street Arts, please visit their website at

I'm delighted to be able to report on the brand new album by the Street Arts Project from Stratford which is released on the 14th of this month ...
[1 image] END_OF_DOCUMENT_TOKEN_TO_BE_REPLACED

You might very well like to check out today's release of a charity single appropriately called "Isolation" by ‘Street Arts Project & ...
[1 image] END_OF_DOCUMENT_TOKEN_TO_BE_REPLACED