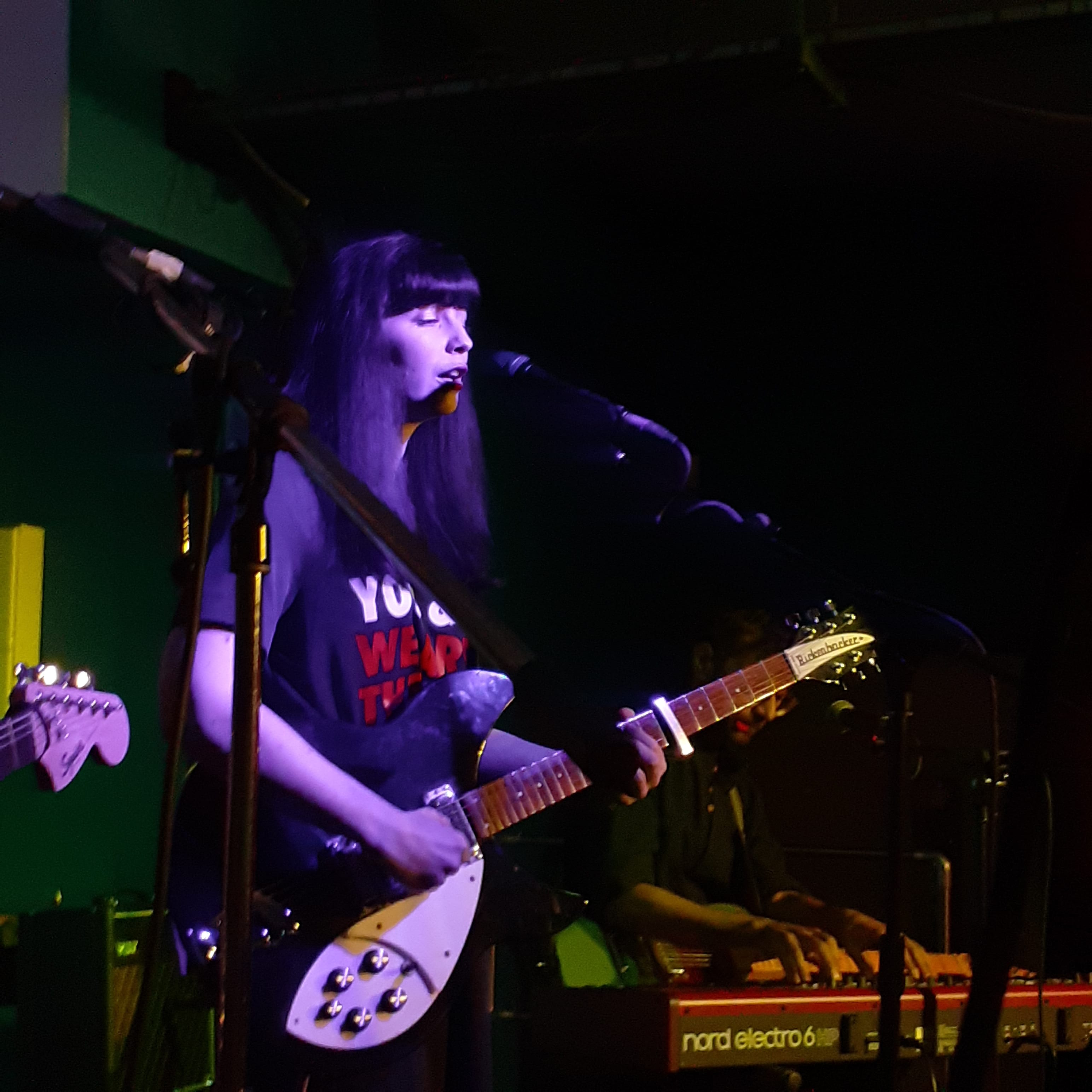 As I've got out more in recent weeks to see live music again, I've been most fortunate to catch some artists whose reputations were made in the late 1970s such as The Monochrome Set, The Undertones & Hugh Cornwell. I enjoyed their gigs enormously, as I wrote in the magazine, though I suspect my reviews won't have much impact on their public profiles.

Last night I was most fortunate however to witness musicians whose reputations are being made right before our eyes (and ears) and whose profiles will definitely be much higher by the year's end: how exciting to be a witness at this stage.

I've written here of both Roxanne de Bastion (who already has a nationally known name) and Bar Pandora, a name which is increasingly on the lips of the most discerning Coventry & Warwickshire music lovers and I was fortunate indeed to catch them last night at The Tin.

First up actually was Zoe Konez who is touring with Roxanne as part of her band, playing guitar, but who also writes & releases her own material & so played a short opening set as a solo artists. An engaging & warm performer, the highlight was her skills on acoustic guitar, deploying a wide range of tricky techniques to tastefully underpin her original songs, several of which were created during lockdown by asking her Patreon followers (some of whom were present)  to suggest ideas. My only disappointment was that her very quiet singing voice (no fault to the sound at The Tin which was superb again all evening despite the challenges of some unusual instrumentation) meant that the lyrics, on which she had presumably spent time & effort, were not easy to decipher.

As I've said, Bar Pandora are the name to watch for 2022 locally: there is a huge buzz about Charlie Tophill's project & people (including other renowned local musicians) were in the audience yesterday primarily for their set. I have been beating myself up a little over not having seen them live yet, as a big fan of the singles, but since I gather this was only their third gig, maybe my considerable enthusiasm was making me unreasonably frustrated in this respect.

On this occasion, despite normally being a trio, Charlie played as duo alongside drummer Matt Rheeston. The absence of a bass player (in fact none of the acts featured one which is unusual) didn't seem to adversely affect their performance: in fact talking with Charlie afterwards, it seemed that it gave them the chance to explore the songs in new ways compared with the recorded versions & they relished that.

In fact they seemed to relish playing full stop. Here's some advice for you: if you enjoyed the singles (and I gave them very positive reviews) then Bar Pandora's mesmerising live incarnation is going to knock your socks off. Charlie has an immense charisma & stage presence and the way they played off each other to realise her unusual & haunting compositions was breath taking. The confidence & love with which they approached material they clearly inhabited fully & were able to interpret it in new ways are hallmarks of the finest musical hearts & minds. No wonder they are the talk of the town & if you've not seen them yet: please do.

Normally artists can be a little wary of following support acts that good, but not only was Roxanne very complimentary about Bar Pandora but she clearly had no sense of competition, but respect and the confidence in her own considerable skills not to feel threatened (if you have not yet had the chance to read my interview with her, please do: there is a passionate articulation in there of her sense of community in music).

In fact Roxanne is also a highly charismatic performer, but appropriately with her own style which she is clearly totally comfortable with & is completely different to Charlie's.

I could be crude here in my classification, but to me musicians might be placed in one of two categories: those desperate to emulate others & hence meet the expectations of the mainstream industry, media & audiences compared to those with the confidence, courage & values to dare to be different, to be themselves & rejoice in that. Anyone who has read my writing will know my preference in this respect and if the mainstream managed to pull in thousands to Coventry last weekend to wallow in the former, The Tin by offering artists like these the chance to play locally is making a stand for the latter.

Accompanied by a flexible & versatile band which in addition to Zoe featured Maddy Hamilton on  ‘cello (which was a pleasing surprise) and Jay Chakravorty on keyboards, guitar & percussion, Roxanne switched between her beautiful Rickenbacker and keyboards with a few numbers at the microphone sans instrument.

There is so much one could say about her set. Starting with one of her strongest & best known songs "Erase" was a bold statement of intent & one I raise my hat to. Drawing on both her debut ‘Heirlooms & Hearsay' and her current ‘You & Me, We are the Same' and encompassing tracks such as "Ordinary Love", "Molecules", "Heavy Lifting", "I Remember Everything" and "London I Miss You" which you might know already, the range of instruments & combinations available made for a set as big on variety as it was quality.

I read a rather mediocre "Guardian" review of the new album: too brief to carry much weight, it was not terribly polite about her debut though accurately reported the range of styles on this one (produced by Bernard Butler). Of course artists develop (and I'm sure the producer had some effect) but I think they missed the point that each album to some degree is the story of a separate family member now gone which accounts for why they might sound different to each other as they sought to capture the essence of those invoked: both in highly moving ways it must be said. So you do get songs in contrasting styles with very distinct arrangements immaculately delivered, including the very raw & basic main set closer "Red & White Blood Cells". Each one seemed appropriate for its subject and not some sort of exercise in demonstrating how sophisticated & diverse the writer's vision was. You could write a list of the styles deployed (and The Guardian did) but ultimately the arrangements were there to realise the songs & if that made for a most stimulating and varied set, then that's both our fortune and part of Roxanne's appeal.

During the last few days, the news that Kate Bush's "Running Up That Hill" has become a hit again has certainly been food for my thoughts. Comparisons can be odious: I have no idea how Charlie nor Roxanne would take being compared to her & in truth at best their music can only be regarded as being a bit like some of hers in terms of sound etc (though some musing about God is in common).. However it makes you think how terribly difficult it is for truly original women writer/performers to combine creating challenging & profound music with commercial success: Kate Bush frankly is a colossal exception (and one who has attracted some unflattering epithets down the years from those who've felt threatened by her talent): others are obliged to perform the work of others or cram themselves into restrictive templates  of the business' making or operate on the fringes within narrow genres. She managed to create a body of stunning work which can be difficult to follow sonically at times let alone lyrically & still have hits. Both Charlie & Roxanne are devising, in their own highly individual ways, work of comparable originality and integrity without compromise: I wonder how far they can go towards broader success? Roxanne is of course further down the road than Charlie at the moment & Kate shows that such success is not entirely unprecedented: though sadly extremely rare. It would be uplifting to think they both could: they deserve to.

As reported in the magazine way back in February, acclaimed singer-songwriter Roxanne de Bastion will be playing at The Tin on June 7th as part of a ...
[1 image] END_OF_DOCUMENT_TOKEN_TO_BE_REPLACED

As anticipated in my interview with Bid last month, yesterday evening saw a magnificent gig at the Tin with the Monochrome Set being supported by The ...
[6 images] END_OF_DOCUMENT_TOKEN_TO_BE_REPLACED

Sadly, my live reviews for 2020 & 2021 have been disproportionately outnumbered by my reviews of releases (and let's not forget the last word of ...
[3 images] END_OF_DOCUMENT_TOKEN_TO_BE_REPLACED