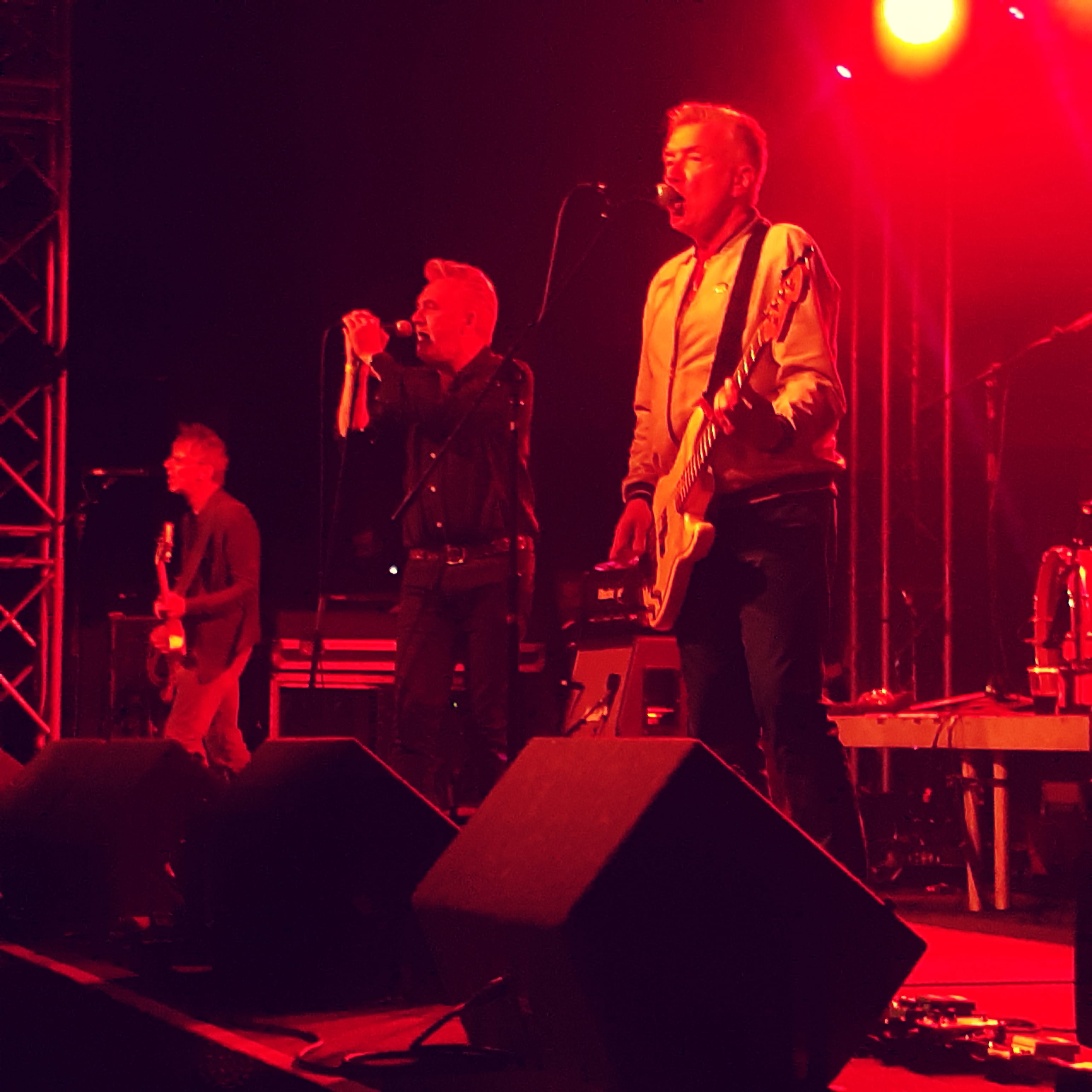 As those of you who were kind enough to read my interview with Paul McLoone last week (and what an interesting one that was for me to enact) will know, I was greatly looking forwards to seeing The Undertones at the HMV Empire in Coventry: that Hugh Cornwell was the support (what a coup) was a very thick layer of icing on my cake.

It was the "biggest" gig I've attended since 2019 including size of venue & crowd so I had a few trepidations on those scores, but credit to Phil Rooney & his team: the venue is immaculately run & despite the size of the crowd I always found my own space without compromising my enjoyment of the music. I interacted with several staff with regards to matters facilitating this review & all of them could not have been more helpful.

It would I suppose take a band as joyful as The Undertones to tempt me into getting out of my comfort zone & I wasn't let down naturally. As my interview hinted at, I find interesting parallels with "Derry Girls": if the latter reflects with humour life in Derry just before The Good Friday Agreement, The Undertones managed something equivalent twenty years earlier: bursting into our consciousness during the often dark days of punk with life affirming songs of getting on with adolescent existence during their even darker days, with the authenticity of punk highlighting the honesty of their writing & performing and in its own way a gesture of defiance against all that was hemming them in. Forty and more years later, the same zest & glee works its magic still, translated to our own times & challenges. If some of the cultural allusions are probably detectable only to those from Derry, there are more than sufficient left for everyone else in the world to relate to.

Hugh's original band The Stranglers  epitomised the edgier (not not mention sleazier) elements of punk, with particular overtones of barely suppressed violence, so as again we discussed last week, the pairing was an intriguing contrast.

In fact, though he & his band still are men in black (and his first two songs had "black" in the title), there is an affability in his stage presence these days with witty explanations of songs but plenty of sardonic lyrics at need. A tight & powerful trio, the absence of keyboards means even Stranglers songs sound different & there is no sense of his being tied down to the sound of his old band. I missed his own searing lead guitar for the first half of the set, but thankfully he unleashed it more as he went on.

In terms of Stranglers songs we got several: personally I was delighted by ones such as "Skin Deep" and "Duchess" (whose lyrics, especially "and the Rodneys are queuing up. God forbid" seemed apt for the shenanigans going on elsewhere that evening), the closing "Five Minutes", "Strange Little Girl" and the affecting "Always The Sun" which seemed to touch the audience the most.

His solo work occupied the rest of the setlist & as I say began very much in black, covering succinct and scalpel sharp rock, quite experimental material & a surprising number of songs about people: Lou Reed, Ray Harryhausen and Hedy Lamarr to be precise.

What can one say about The Undertones? You can't pick out highlights of the set because every song is one. Everyone knew & loved every track played & the only people enjoying themselves more than the audience were the band: as Paul said to me, coming out of COVID19 has energised them still further & they seemed to having a ball: admitting that some songs were played "too fast", bopping around the stage as usual, except more so:  Paul himself jumping about & throwing shapes like a 20 year old. Throughout the set too: which managed to cram in more songs than I could count: from all six albums, most of the singles, B sides, EP tracks etc. Virtually every track from their debut appeared at some point. The playing was unbelievably tight (and rehearsing together must be difficult given their other commitments) and it was great to see Billy Doherty looking so well after his health scare & giving it his all o the drums. If & when they hang up their instruments, Paul & Mickey Bradley possibly have a future in comedy: their wit being as sharp & fresh as the performing.

As noted last time, the band have a compilation out of the two albums with Paul singing ("Dig What You Need" it's called) and the many songs from this era went down as well with the crowd as those from the previous one: "Thrill Me" in particular got a reception which if it was bettered all night would only have been so by that for "Teenage Kicks".

It's my opinion but not only has release from COVID19 liberated The Undertones, but a sense of release & renewal occurred in 1999 when Paul replaced Feargal. The latter's incredible & unusual voice not only acted as a fascinating juxtaposition to the Ramones & ‘Nuggets' influenced music, but added to the sense of adolescence & fitted the "Mars Bar" period lyrics: that's what got the hits.

However by their ‘Sin of Pride' album, the strain of writing adult lyrics for such a voice can be seen & ultimately they split up. Paul's voice is bluesier & much better fits the musical template, enabling them to write more comfortably possibly. His singing of Feargal recorded songs lacks nothing beyond the idiosyncratic delivery. In at least two tracks, he's taken songs elsewhere. The first was "The Love Parade" which was the only song in the set it took me a moment or two to recognise so transformed is it from the delicacy of the single into something much more celebratory & robust. The other was the sublime "Wednesday Week" (a personal favourite) where his reading of the lyrics genuinely transformed aspects of its meaning for me.

I have never seen The Undertones put in a bad or even mediocre performance: they love playing & love their own music. That makes it really difficult to try to explain how I thought they'd managed to kick up yet another gear that I (and maybe they) never knew they had.. perhaps they've always been close to perfect but now they are pluperfect?  I know that is not what the word means but I can't think of anything else.

This is a band at the very height of their powers: catch ‘em. You'll love ‘em. I did.

As reported earlier in this month, one of the world's favourite bands, The Undertones, are playing at the HMV Empire in Coventry on Saturday ...
[2 images] END_OF_DOCUMENT_TOKEN_TO_BE_REPLACED

Although the live music scene over the past couple of years was especially hard hit, one ray of bright light for our area was the opening of Phil ...
[2 images] END_OF_DOCUMENT_TOKEN_TO_BE_REPLACED