The Monochrome Set & The Pristines at The Tin 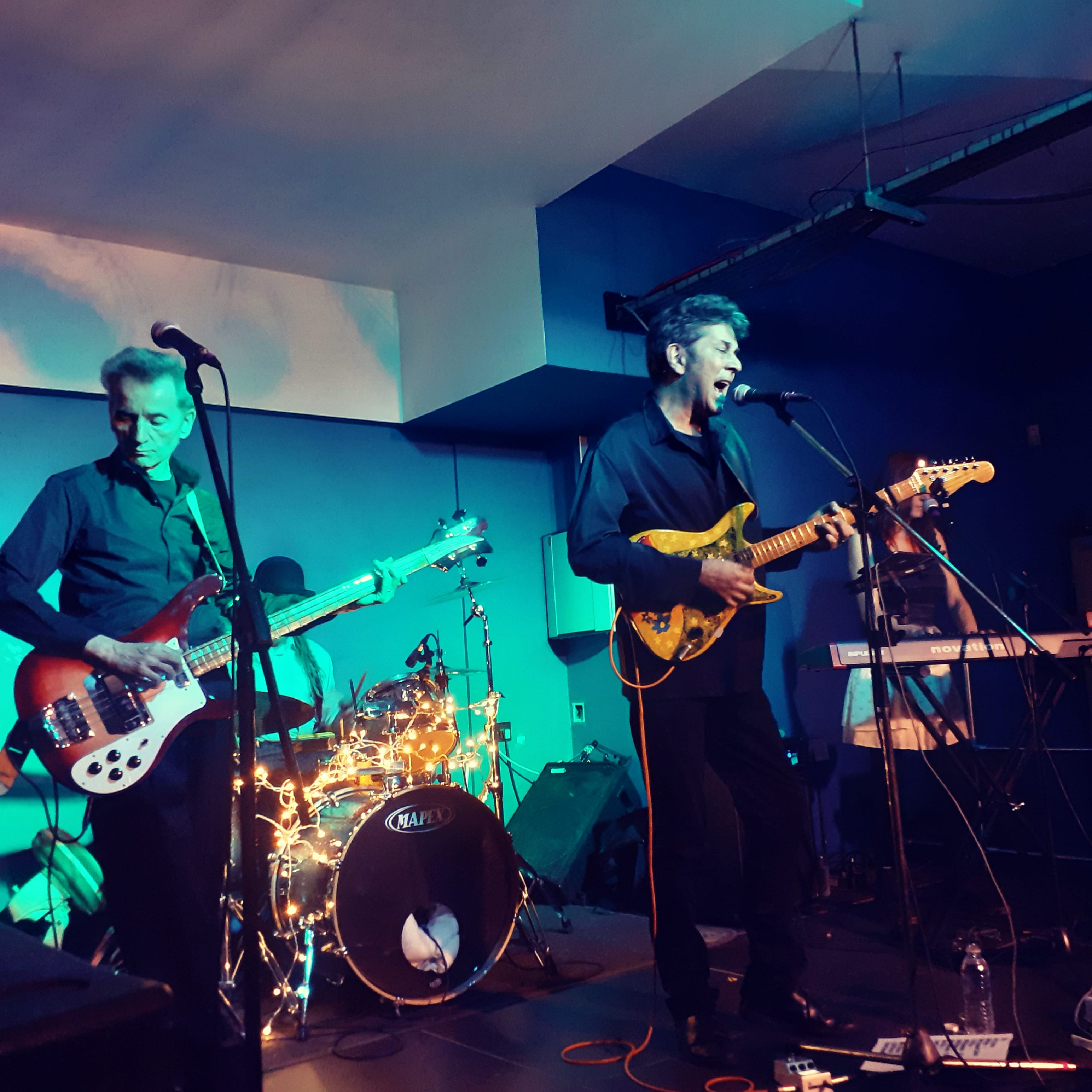 As anticipated in my interview with Bid last month, yesterday evening saw a magnificent gig at the Tin with the Monochrome Set being supported by The Pristines: a concert regarded by the musical connoisseurs present as the best in Coventry that day: and I'd certainly go along with that.

This was my first time at the Tin since its renovation & I must say I thought it had gone well: it was a bit of a shock to see the new stage at the opposite end, but it's now a more orthodox shape, allows for better views & judging by last night, helps the already excellent Tin sound even further. You could literally still smell the new paint too.

First up were "Hot Music Live Presents" artists The Pristines and although I actually reviewed them relatively recently (last September at the same venue), the conversations I was having last night were all along the lines of why they don't seem to play as often as their talent demands (though in fairness band members have commitments in other groups).. the lineup does also seem fairly fluid & this time Paul Quinn joined them on guitar & vocals & believe me if you thought a three piece Pristines were something special, the extra elements impelled them still higher. A most powerful & compelling live act, ultimately of course they build upon the excellence of their repertoire & Jon now has a deep reservoir from which to draw for setlists (with hopefully more to come). As I have said before, you can hear where so many contemporary local bands get their inspiration from (in part at least) listening to The Pristines.

It was great to hear a louder & fuller arrangement of "Some People Can't Be Told" from ‘Hot Music Live Presents Volume One' and as ever, "Sea Horse" was a standout even with the quality of the other songs such as "Getting My Head Together", "Backslide" or "The Bombastical": in fact it's worth celebrating that they had a comparatively long stage time last evening with 45 minutes to fit in more songs than usual (nine in fact).

We need more Pristines in 2022 please.

If The Pristines have a catalogue to die for, what must that say about headliners The Monochrome Set? Having wonderful material from at least 1976 to the present day to draw upon, no wonder they are beloved, respected & influential: if only they had the wider commercial success their talent deserves: for those who know, and understand, they have been consistently one of Britain's best bands for decades (which reminds me that reading Peter Hook's "Unknown Pleasures" memoir of his Joy Division days recently, I was delighted to spot his appreciation of them) but like so many great bands known more for their quality & cult statuses, both touring & making records these days can be fraught financial affairs.

Nevertheless: what a set! Opening with their eponymous 1979 single, they went straight into "Jet Set Junta" only second song in: one of many moments n the set where the thrill of just the opening sent tremors up my spine.

For long term fans, especially those of us who'd not seen them in a while, they crammed in so many of the older "should have been hits": the two I've just mentioned, "The Ruling Class". "The Mating Game", "Alphaville" for all those of us who bought ‘Pillows & Prayers' there was a stunning version of "Eine Symphonie des Grauens" and "He's Frank" was one of the encores.

Yet the band are still creating great music (as you'll see from my interview with Bid, he is very proud of the quality of their music and how "..from the very beginning, our music was not of the crowd, and we avoided any aesthetic traps….People may be influenced by elements of our songs, but they will never sound like us, because they don't write songs like us…there is a degree of purity/otherness to our sound, which is not tied to a social period. You don't need to join any club to listen to us"). So we had the title track, "Resplendent In A Darkness" and "Really In The Wrong Town" from the current album ‘Allhallowtide' (the title track is another which is already getting me with the intro alone). I've been playing this a lot lately & was intrigued by how it would sound live in the context of their older material: although it has great internal variety, overall I find it a more contemplative, reflective set than much of what has passed before, yet live it came into its own in a way slightly different to the record: a more powerful dynamic which helped the songs fit in, but also I felt gave Bid's voice new challenges: it is going somewhere new these days: a little deeper & even more sonorous (Tom Robinson likens him to Scott Walker) and it's greatly impressive. The red wine he was drinking must have played some part in that.

The rest of the band included long time collaborator on bass Andy Warren, returning drummer Mike Urban & relatively new keyboard player (and backing vocalist) Athen Ayren. If Bid onstage is all about charisma & the succinct caustic wit his songs suggest, Andy may well be aiming for the title of the most impassive musician ever to grace a stage, yet he is one of those players with a unique style of playing which is so rare & frankly is a huge component of the band's sound: thrillingly economical, he makes each note & run count to the maximum & one could spend a whole set just studying his playing (he also provided backing vocals on "Eine Symphonie des Grauens" to again, on the money efficient effect). I also made the mental note of how long it has been since I saw anyone play a Rickenbacker bass: what's happened?

If Andy's playing is terse & stiletto shaped, Mike's drumming could not be more different & maybe the contrast is another reason the band's sound is so unique: busy & exuberant, he makes the same riffing, almost melodic contributions that Keith Moon did. He even caught my eye with something I'd never (as far as I can remember) seen before: during Bid's affecting solo encore of "Goodbye Joe", he made it from the stage & to the bar & back again with shots for himself and Athen without eyebrows being batted.

The revelation however was Athen: the first time I'd seen her with the band and the chance to see the effect of replacing a lead guitarist with keyboards, given the importance of the riffs from the likes of the legendary Lester Square on the classic hits (Lester by the way will be guesting with the band on September 17th at The Lexington in London to play a 40th anniversary concert of the whole of the ‘Eligible Bachelors' album) with his highly distinctive "Ennio Morricone" style.. Well it worked really well. A very adaptive player, she not only replicated or replaced the guitar parts so you didn't notice, but in addition to adding orchestral layers to some songs, attacked others with a highly impressive almost Ray Manzarek style. She seemed to have a lot of fun all night, not least on "Mrs Robot".

Amongst the other songs we were lucky enough to savour "Rest Unquiet Spirit" and "La Chanson De La Pucelle" from their previous album ‘Fabula Mendax' whose promotion & performance regrettably were stymied by COVID19, "I Feel Fine (Really)" from ‘Maisieworld' (2018), 1991's "Jack", 1990's "Walking With The Beast" and from their 1980 debut album ‘Strange Boutique', "Love Goes Down the Drain": forty years and more of exquisite gems. This is indeed a classic band who create classic, timeless songs & enjoy playing them with virtuosity, zest and love.

Actually there was quite a lot of music on in & around Coventry last night, but I hadn't the slightest hesitation in making my choice & was darned glad I did what I did.

If you've not seen either band: you don't know what you are missing & need to do so forthwith.

Much as I get a huge amount of pleasure writing about our current vibrant & diverse local scene, I get a special thrill when one of my favourite ...
[1 image] END_OF_DOCUMENT_TOKEN_TO_BE_REPLACED

As I've got out more in recent weeks to see live music again, I've been most fortunate to catch some artists whose reputations were made in ...
[9 images] END_OF_DOCUMENT_TOKEN_TO_BE_REPLACED

As reported in the magazine way back in February, acclaimed singer-songwriter Roxanne de Bastion will be playing at The Tin on June 7th as part of a ...
[1 image] END_OF_DOCUMENT_TOKEN_TO_BE_REPLACED