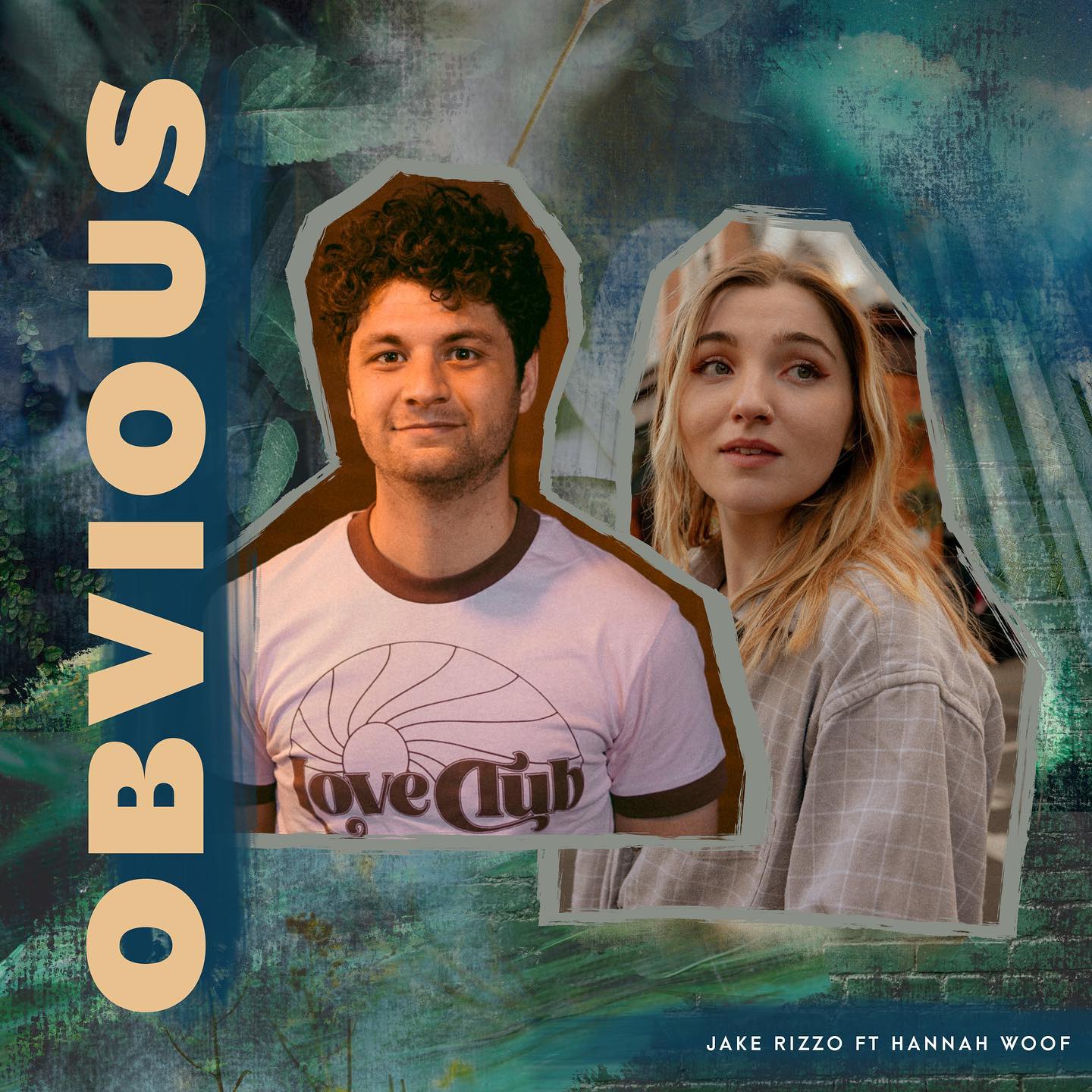 Double good news for the "Hot Music Live" community as not only does Jake Rizzo have a brand new single called "Obvious" out today, but it's a collaboration with Hannah Woof: indeed it was jointly written remotely during first lockdown

We often cover each artist individually: most recently Jake's "Glad To Say" in November and Hannah's "My Phone" last July and both is a featured "Hot Music Live Presents" artist : Jake with "Try" and Hannah with "Sweet Talk", both on Volume Two. However neither has yet been seen as duetting, so it's one of those firsts which are always good to chronicle.

However I must admit that, although I admire & respect both & I knew them to be good friends, I had never considered that they might work together in this way. This has nothing to do with their abilities as performers: their voices are so good separately that blending them was bound to work. It was more to do with the writing. Each has been developing a strong individual voice as a composer (much to their credit & duly applauded via past reviews) and they have (at least as far as their releases to date have indicated) viewed the world around them from what appears to be quite distinct perspectives. How could they combine their visions into one without compromising their values?

Well you can tell where this is going can't you? Clearly they gave this some thought & tackled the issue in such a way that they were satisfied & consequently listeners can be too.

It's revealing that although a writing & performing collaboration, this is presented as a Jake single with Hannah as featured artist (Hannah's frequent associate Jack Arnold produces, Matt Cotterill mixed, Riley Knapp mastered & Emilié Cotterill of Transluceo created the artwork). The overall theme is more veered towards classic Jake territory (the general sense of abstraction & universality of experience being gleaned from specifics) and the arrangement is closer to his previous work. What Hannah brings to the feast not only adheres to her personal strengths & values but also rather neatly complements Jake's parts: she in contrast favours the personal & intimate over the broader contexts & she brings that delightful cutting edge that her own work has to this record: bringing both together actually makes for a song of contrasts yet completeness: a very fulfilled track. If you want a slightly over-egged Beatles analogy, Hannah plays the John Lennon to Jake's Paul McCartney perhaps.

All of which should not take anything away from the actual sound of the song. The two voices do blend most effectively together, through melodic moments both lighter & darker & even if you don't listen to the words (which is a shame given the work that's gone into them), you'll enjoy the feel of the whole: a grown up sounding piece about grown up ideas.

I don't know if the whole idea was as conceptually challenging to them as it was to me (they probably have far more imagination, so I guess not), but even so, they deserve much credit for going for it & making it work so well that you wonder if this will become an ongoing relationship.

You can hear "Obvious" too on the "Hot Music Live Presents" Spotify playlist via this link: https://open.spotify.com/playlist/5FjGYjhwzcZShIsnPOA7m9?si=edd9fc0eaacf4289

It's a rather unbelievable two years since we last covered a Jake Rizzo release in this magazine, and ironically our review on that occasion ...
[1 image] END_OF_DOCUMENT_TOKEN_TO_BE_REPLACED

It is said of several aspects of life that "a week is a long time" within them: to the list we might now add the career of Jake Rizzo.
[2 images] END_OF_DOCUMENT_TOKEN_TO_BE_REPLACED

It is always a great pleasure to review excellent music, but to focus on a debut single is that extra bit special as you feel like a traveller ...
[1 image] END_OF_DOCUMENT_TOKEN_TO_BE_REPLACED