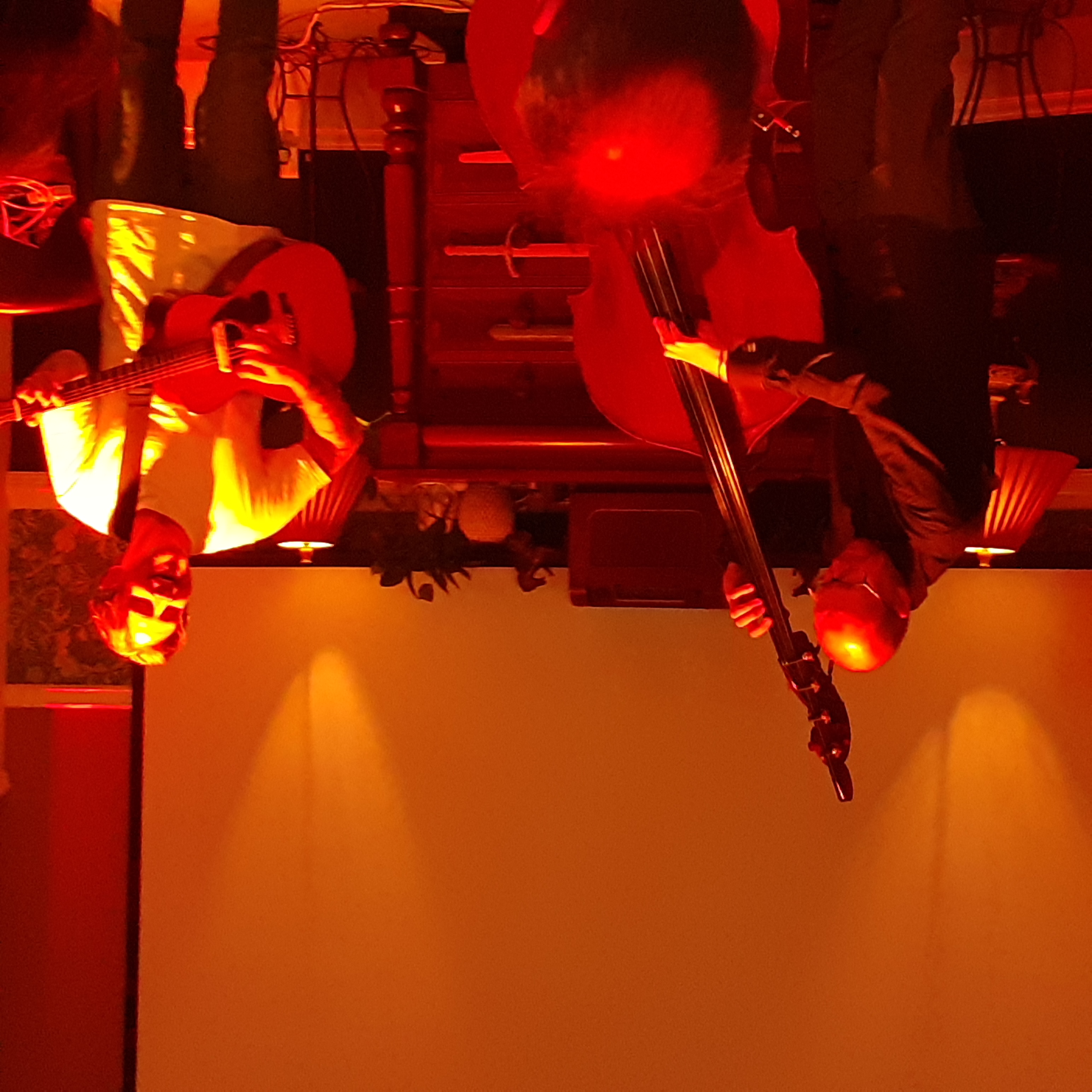 On this occasion, as it was the 458th birthday of Warwickshire playwright and lyricist William Shakespeare (an early member of the still thriving Stratford arts scene), the theme was intensely Bardic & went under the banner "Hush! A Shakespearean Celebration"

Once again, as all these events will be, the programme consisted of a mixture of artforms harmonising & complementing each other to create a celebration even greater than the sum of the constituent parts: which considering the virtuosity of the artists & their clear love of what they were doing is saying much.

Therefore Emma Cooper & Taresh Solanki of Tell Tale Presents, whom many of you will have seen putting on their original plays in local venues from the RSC to community halls, staged three of their own interpretations of folk tales from around the world which inspired plays of Shakespeare (I'll not say which ones as hopefully you'll see them yourselves at some point & be invited to work that out for yourself).

These were interspersed by Wes Finch and John Parker of The Mechanicals Band performing the settings of some of Shakespeare's poems & songs which they originally released (as the Rude Mechanicals) on their album ‘Exit, Pursued By A Bear' in 2017.

This then is a bare description of the basic parts: that the evening worked so well & was a true testament to the genius of the dedicatee also involves the interaction between them & the environment they performed in plus the details of the performances themselves.

Firstly, the decision to alternate drama & music instead of having two distinct & separated sets integrated the parts into the whole very effectively, gave differing perspectives onto the work we all know so well & allowed ongoing reflection on this more holistic view of the arts.

One cannot understate the role this beautifully proportioned & refurbished space offers performers either: all four palpably responded to environment & seemed to revel in it.

For Tell Tale, a large part of their style is direct audience interaction & this was facilitated by the shape and area allowed them & by the willingness of those present to participate in the drama: breaking down barriers too often erected in theatre. The gift of a sprig of rosemary (for remembrance) to each person present was also a touch of subtlety & taste appreciated by us all.

Wes & John too seemed inspired by the aesthetics of the room & proximity of the audience & took the decision to abandon microphones and pickups in favour of a wholly acoustic performance: a first for this material & something which seemed to please them so much that afterwards they were talking about developing the experiment.

It has to be said that the songs they played work especially well in intimate settings (lord knows how the subtleties of the songs fared in the presumably raucous atmosphere at the Globe four hundred years ago) and the delicacies not just of hearing them so naturally in such a good acoustic space but also stripped back in arrangement (most also feature viola, violin & drums on the record).

As a treat, they also added a few non-Shakespearean numbers from their repertoire (Edna St Vincent Millay's "Recuerdo", W B Yeats' "Meditation of an Old Fisherman" and a brace of Philip Larkin poems: "Horns of the Morning" and "The Trees") all of which I'm sure WS would have understood & approved of.

So there you have it, a very inclusive, integrated & holistic evening where venue, performers, audience & material combine into something very special in honour of someone equally so. You could feel the magic in the air.

If you fancy joining in such an evening, the next one will be "Hush! A Summer Celebration" at the Library on Saturday 18th June at 5 pm, featuring the music of Izzie Derry and other treats to be revealed.

If you are an admirer of the visual artistry of Russell Whitehead or the musical artistry of Wes Finch, or indeed of both as I am, then I'm sure ...
[1 image] END_OF_DOCUMENT_TOKEN_TO_BE_REPLACED

I'm sorry to say that I'd never previously attended one of the summer Sunday afternoon concerts on the Bandstand in Stratford before but ...
[7 images] END_OF_DOCUMENT_TOKEN_TO_BE_REPLACED

Very slightly more than twelve months ago I reported to you on Wes Finch's Leap Year gig: a special event to mark the four yearly occasion & to ...
[1 image] END_OF_DOCUMENT_TOKEN_TO_BE_REPLACED

Somewhat to my surprise, yesterday afternoon I found myself enjoying live music in the actual physical presence of the musicians creating it for the ...
[2 images] END_OF_DOCUMENT_TOKEN_TO_BE_REPLACED

There is some good news for Wes Finch fans awaiting the release of his Leap Year gig live album (as (p)reviewed in this magazine last month) He has ...
[1 image] END_OF_DOCUMENT_TOKEN_TO_BE_REPLACED

Some six months ago, I wrote what to date is my penultimate live review for the magazine: concerning Wes Finch's Leap Year gig.
[1 image] END_OF_DOCUMENT_TOKEN_TO_BE_REPLACED