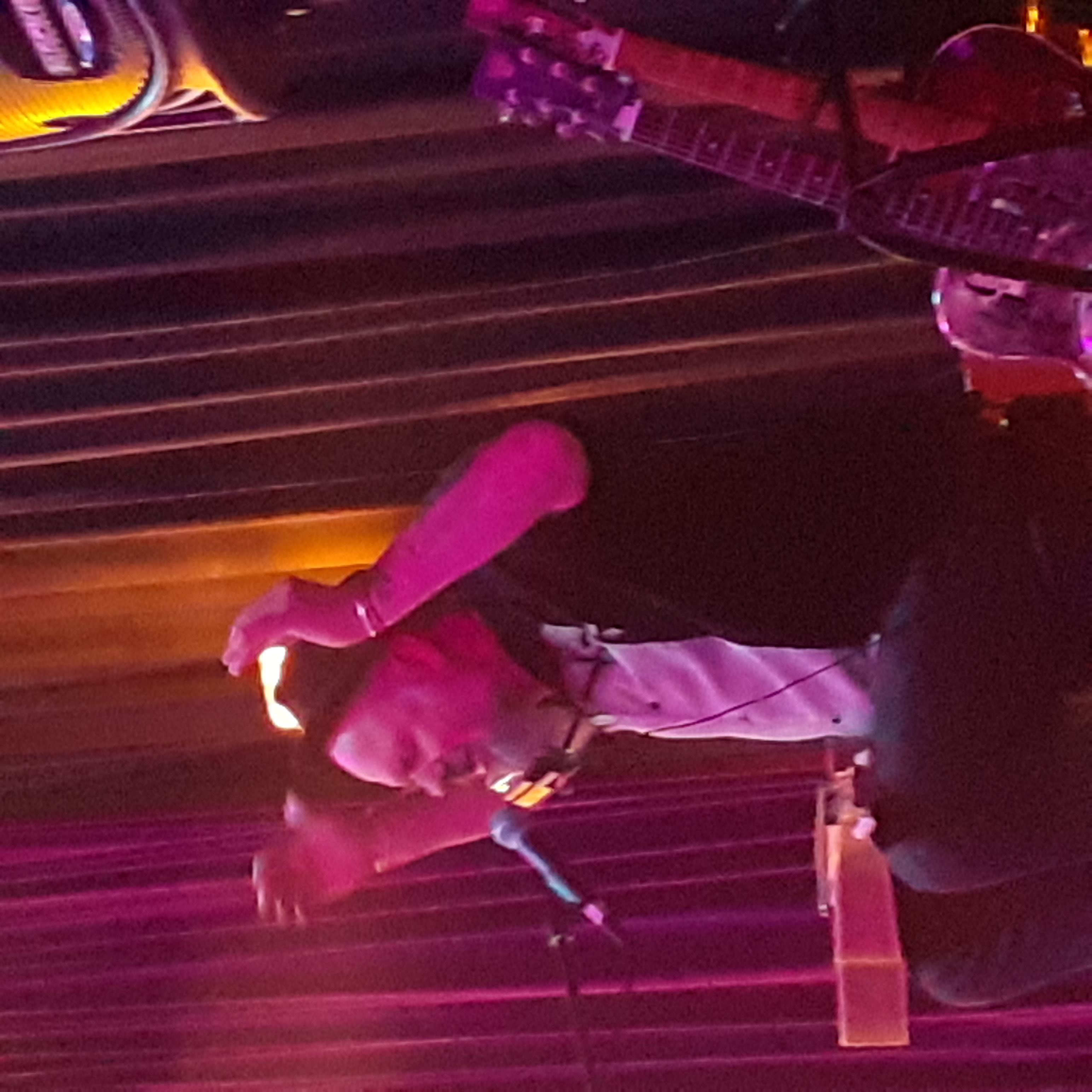 Last evening's Stratford Playhouse Folk Club meeting was as intriguing a juxtaposition of two talents as its predecessors.

In some respects: for example that of relative quantities of released material, the gap between headliner Trevor Babajack Steger  and  Wes Finch was closer than say the Martin Carthy/Jack Blackman or John Kirkpatrick/Jen Waghorn  pairings where the sense of baton passing was more palpable. Both Trevor & Wes are at the height of their powers & likely to remain prolific for years to come.

For most of Wes' set, I assumed that a contrast in styles between the two of them might be a clear talking point: however this assumption was glib & successfully challenged by two artists with broad repertoires & loves. True, Wes for the most part focused on the more pastoral, folk, end of his canon, keeping it gentle & melodic, but ending with a dive into the blues as a link to what was to follow.

Trevor, though keeping to the rawness of a blues approach for which he is justly feted for much of his set, also unleashed something of a revelation with material shared from his recorded but as yet unreleased new solo album, which was much gentler & closer to Wes' style (I particularly enjoyed one evoking sunrise over the canal on which he lives in a boat).

The latter roamed at will across his own projects and so we had signature solo songs such as "Southern Cross" alongside Silver Wye tracks & several Mechanicals ones. A standout for me was a reworking of the old Dirty Band song "The Pact" on solo guitar which sounded very 1920s in its syncopation & evoked something a lot closer to the honkier tonkier blues of that early period.

Where I think the crucial distinction between the two can be made (though no one could conceivably fail to distinguish between their performance styles either) is in their approach to lyrics.

Wes, as most readers will know, is much taken with setting poems to music & his own writing can perhaps be said to follow this very literary approach. Words are probably no less important to Trevor, but he uses them very differently. Eschewing the precise metered literary angle, he goes for the heart of the message & plays with it, amplifying it & turning it into something hypnotic. Most of his songs end up quite long as he takes core lyrics & in virtually every single song makes them into a mantra: constantly repeating them with varying degrees of intensity & diction until the whole song becomes a somewhat transcendental affair: a wonderful example of the testifying side of the blues. However although the classic blues is a very important starting point for him, a stand out song for me had a much more African style (his Babajack name was given him by the Shona people of Zimbabwe while he was teaching woodworking skills on a VSO programme and references his being the father of Jack) and his approach worked ideally for that too. I'd love to hear more of that side of his repertoire.

Another key influence which accounts for a lot of the rawness & intensity was coming to the blues from punk: both, he feels, "seek truth" and I'd not argue with that.

As it happens the gig was on his birthday and he sported both a new guitar stand & shirt he'd received, (his between songs anecdotes & explanations were another highlight of the evening) but I was perhaps even more impressed by the guitars he played: a couple of resonator ones including a vintage National dobro & one his woodworking skills had created, a lap instrument which featured 5,000 year old bog oak wood… now one doesn't see that too often. Most tracks were accompanied by use of stomp box & harmonica (the latter instrument being one he has been nominated for awards for his talent playing), but what was also noticeable was the number of songs where at the peak of intensity, he'd abandon all instruments and finish a cappella, his hands thrown wide & face contorted in a moment of ecstasy that his performance had generated.

Described as "Howlin' Wolf meets Screaming Jay Hawkins", I think one might easily throw in the odd comparison to Dr John & interestingly, his single cover was a Sleepy John Estes original, delivered in a raucous & powerful  style a galaxy away from that of its originator.

So here you have it: two outwardly different musicians looking at fairly similar subjects (for example both are interested in the Devil, his doings & how to thwart them) but in differing ways: not diametrically opposed, but in fact complementary. But no one can doubt the commitment nor passion of either. Personally I enjoyed both no end.

Thanks to (adverse) fate, I've not actually written about a live Greg Brice gig in the magazine before, which is quite embarrassing given his ...
[4 images] END_OF_DOCUMENT_TOKEN_TO_BE_REPLACED

Having reported on last month's inaugural Stratford Playhouse Folk Club gig, I was delighted to make its follow up as well.
[8 images] END_OF_DOCUMENT_TOKEN_TO_BE_REPLACED