"Bury Me Deeper Than The Rest" by Massasauga 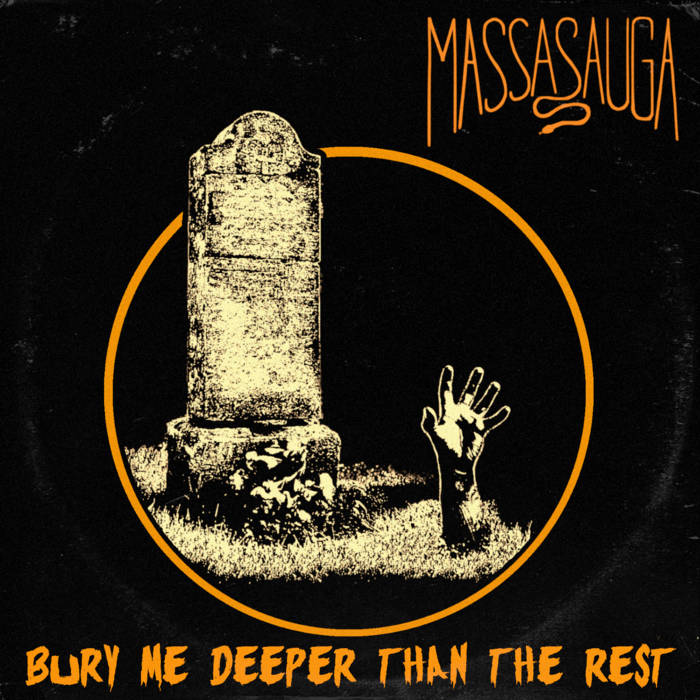 Out today at 8 pm is the new Massasauga single, with the sort of title you have come to expect from this band with a penchant for the darker side of existence: "Bury Me Deeper Than The Rest"

When I reviewed their previous release, the Spielberg inspired "Motorbeast" back in February, I mentioned that that single & its predecessors would meet up on the forthcoming ‘Exorcisms and Psychic Vision'  EP.

That EP is on its promised way, but the band themselves couldn't wait, so wrote this one to exorcise any frustrations they were experiencing in the interim (I'm of the belief that it won't be on the EP itself).

A most curious amalgam of styles & influences, "Bury Me Deeper Than The Rest" is perhaps a bit more of an orthodox blues approach to their characteristic fuzz rock sound and while moody & magnificent in its sombre way, the riffing has a very T Rex feel: imagine if Marc Bolan had joined The Cramps & you're in the right area. However you also have to factor in an ominous & measured tread of doom a la Black Sabbath: yet the whole is actually pretty catchy (well to me at least & I accept that Radio Two isn't about to add it to their playlist any time soon), despite the whole narrative evoking the undertakers carrying the coffin to the gravesite: and perhaps the Grim Reaper accompanying them?

"When I'm gone there's one request,
Bury me deeper than the rest"

they sing, so one can only assume that the corpse has a feeling that he won't be sleeping very quietly given his sins on earth: which are more implied than stated. It also rather suggests that he's not quite a corpse yet & they he's being taken to his own grave in anticipation of his imminent demise. How macabre is that?

One other aspect of their evocation which I often mention but perhaps do not draw enough attention to, is that nearly every time, the band incorporate one sound into the arrangement to reflect the song's meaning: such as the beast sounds last time. On this occasion, the inspiration of the single's tagline "light your cigarette with the last spark of your lighter" is reinforced by the snare drum having been replaced by the sound of the spark from a lighter.

Out at 1800 today was the long awaited EP by Massasauga, ‘Exorcisms and Psychic Visions'  which is also a compendium of most of their recent ...
[1 image] END_OF_DOCUMENT_TOKEN_TO_BE_REPLACED

One of my favourite movies by Steven Spielberg, has always been "Duel": unfortunately as it was his 1971 feature length debut, it has been grievously ...
[1 image] END_OF_DOCUMENT_TOKEN_TO_BE_REPLACED

Way back in the day, Hallowe'en was a rather different sort of festival, a sort of development of the pagan Samhain harvest festival but ...
[1 image] END_OF_DOCUMENT_TOKEN_TO_BE_REPLACED

It was back in April when out of their "7 Nights of Terror" competition, Massasauga fans voted the chilling "Switchblade" to be their single.
[1 image] END_OF_DOCUMENT_TOKEN_TO_BE_REPLACED

You may remember when back in February Massasauga invited you to participate in their "7 Nights of Terror" wherein they shared teasers of seven songs ...
[1 image] END_OF_DOCUMENT_TOKEN_TO_BE_REPLACED