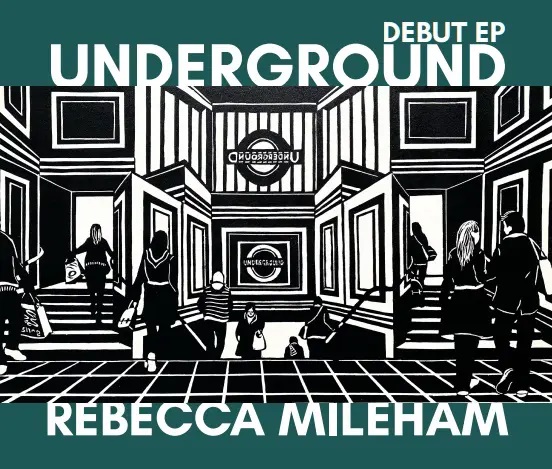 Just in from Rebecca Mileham, whom you may know from her roles as violinist and vocalist in Liam Vincent & the Odd Foxes is the news of the release of her debut solo EP ‘Underground'.

Produced by Matt Berry from Raindrop Sound Design, the collection comprises five original tracks, "All in the Mind", "Cherries",  To Grow a Rose", "Oh Kylie" and "In My Head" and is wholly performed by their composer on vocals, piano, violin, octave violin & found sounds.

I enjoyed the songs & can't think when I last heard a voice mixed that high up: a real sound of confidence to go with the forcefulness of the vocal delivery.

It's an interesting production as not only are the vocals extremely prominent, but the various instrumental sounds are given a fair hearing too. You get a sense that there is no sound on the EP which was not very carefully deliberated over & only the ones considered worthy permitted onto it, and once there, given their full due.

Consequently, what you get with the EP is not only thoughtful & high quality musicianship, but a good variety of sounds across the collection.

I suppose I was expecting something "folky" in nature before playing it, and while that isn't too bad a description, when you get tracks as funky as "In My Head" or as unusual as "Cherries", any single word descriptor is pretty inadequate.

I suppose the whole process of creating a solo record outside the structure of a band must necessarily lead to taking advantage of the removal of any constraints (however benign) and explore sounds which might not be possible within it. However I'm not sure what we have with ‘Underground' is wilful experimentation for the sake of it: it certainly doesn't come across as self indulgent. I'm sure the songs are the centre of attention & the arrangements serve them, but the chance to create a set of five songs with so much differentiation within it has not been spurned. This also applies to the vocalisations: not least the harmonies & multiplicities which while impressive, must be going to be challenging to reproduce live, given that they are all Rebecca on the record.

As for the words, they are as cleverly wrought as the music: "adult" themes inasmuch as they are the sort of themes which can only be conceived of & convincingly delivered by someone with enough life experience to comprehend adequately: they are well worth your attention. "In My Head" in fact is quite disturbing despite its upbeat accompaniment…..

This is a most compelling debut & excellent value for money if you are the sort of connoisseur of music who appreciates something neatly balanced between traditional aptitude and experimentation, and between the expected & the surprising. It'll mess with your mind I think, but in a way which will stimulate rather than traumatise it.

Hewick as In Three Minds at

Just Dropped , in Coventry 7 May 2pm