"Said It Before" by Bally & Boom featuring Rheo Uno 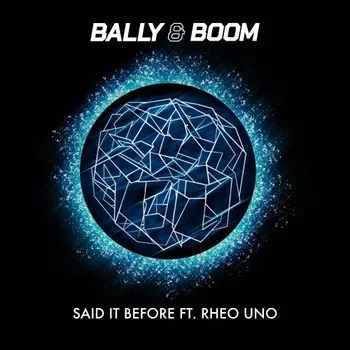 It's not exactly unknown for me to come across a track or artist unexpectedly whom I later review: it must however be more rare for an artist to find herself unexpectedly on a single.

Nevertheless, this is what has happened to Rheo Uno recently.

There she was, minder her own business, recording one of her own compositions in Fidget Studios in Coventry when Boom of Bally & Boom popped in to invite her to sing on their track, which she did with demur nor delay.

Now the single "Said It Before" by Bally & Boom featuring Rheo Uno is officially out on Icarus Music.

A drum & bass track from specialists in those arts, Rheo would say that it's not normally her area of work normally (which is true enough), yet since most, if not all of her own music is dance friendly & aimed at club audiences too, she clearly was able to adjust to their expectations as if she had been working in the genre for years.

Quite apart from the quality of her voice, where I think the duo scored in asking her to guest is that despite the brutal onslaught & machine led beats which the song builds up to (after kidding us a little with the gradual building up from a sparse intro which might, at a pinch, have come from one of her own tracks), Rheo lends a sense of humanity & helps add a grounding counterpoint to the ferocity around her. This contrast is never a bad thing in any genre and takes it somewhere it doubtlessly would not have gone otherwise (the general feeling that it was heading for outer space until Rheo tweaked the direction of flight).

What is also interesting is how her voice, which normally nestles within arrangements designed for her own songs, rises to the challenge & manages to sit on top of a much louder & aggressive backing: clearly she had a few extra power settings held in reserve that "Said It Before" showcases.

Yes you've heard Rheo Uno groove, you have heard her smooch, swing & even get a little raunchy, but this outing, unplanned as it was, adds another facet of what she can do if it suits her to her CV. It also showcases her adaptability to the creations of others & her capacity to respond to lyrics she hadn't written herself. I guess too, given the speed of how this collaboration unfolded, that there was little if any prepping time & so this must have been close to an improvisation as far as she was concerned. And she has pulled it off with aplomb.

Look out too for the video accompanying the single which is most impressive, though while enjoying it, spare a thought for Rheo as she was filmed in conditions of -40. You can find it at

I'm sure she is proud of this single, but whether that means she would consider a Rheo Uno drum & bass single in the future, who knows. From what she tells me, at the moment I think she has it filed as an interesting collaborative side project.

In the meantime, she is back focusing on her own creativity & I gather is currently working on three new tracks and feels  "…they're getting better and better" which sounds confidence indeed given how well her recent run of releases has been received: I gather last month's "Let You Go" is getting a lot of streams, airplay & praise. As well it might.

I have two excellent pieces of news from Rheo Uno for you.
[1 image] END_OF_DOCUMENT_TOKEN_TO_BE_REPLACED

Like most people, I'm never averse to pleasant surprises & this track dropped so out of the blue that fifteen minutes before starting to write ...
[1 image] END_OF_DOCUMENT_TOKEN_TO_BE_REPLACED

It seems only yesterday that I reviewed Rheo Uno's single "Señorita" for you (it was about a month ago in fact) and here we are again for her ...
[1 image] END_OF_DOCUMENT_TOKEN_TO_BE_REPLACED

I get extremely intrigued by what artists occasionally say about their own work.
[1 image] END_OF_DOCUMENT_TOKEN_TO_BE_REPLACED

Considerably less than a month ago, I was strongly suggesting to you that you should check out the new Rheo Uno single "Wife Me?" yet already the ...
[1 image] END_OF_DOCUMENT_TOKEN_TO_BE_REPLACED

Unfortunately, it has been over a year since I last wrote about a Rheo release in the magazine and a similar timespan since her "Down For You" ...
[1 image] END_OF_DOCUMENT_TOKEN_TO_BE_REPLACED