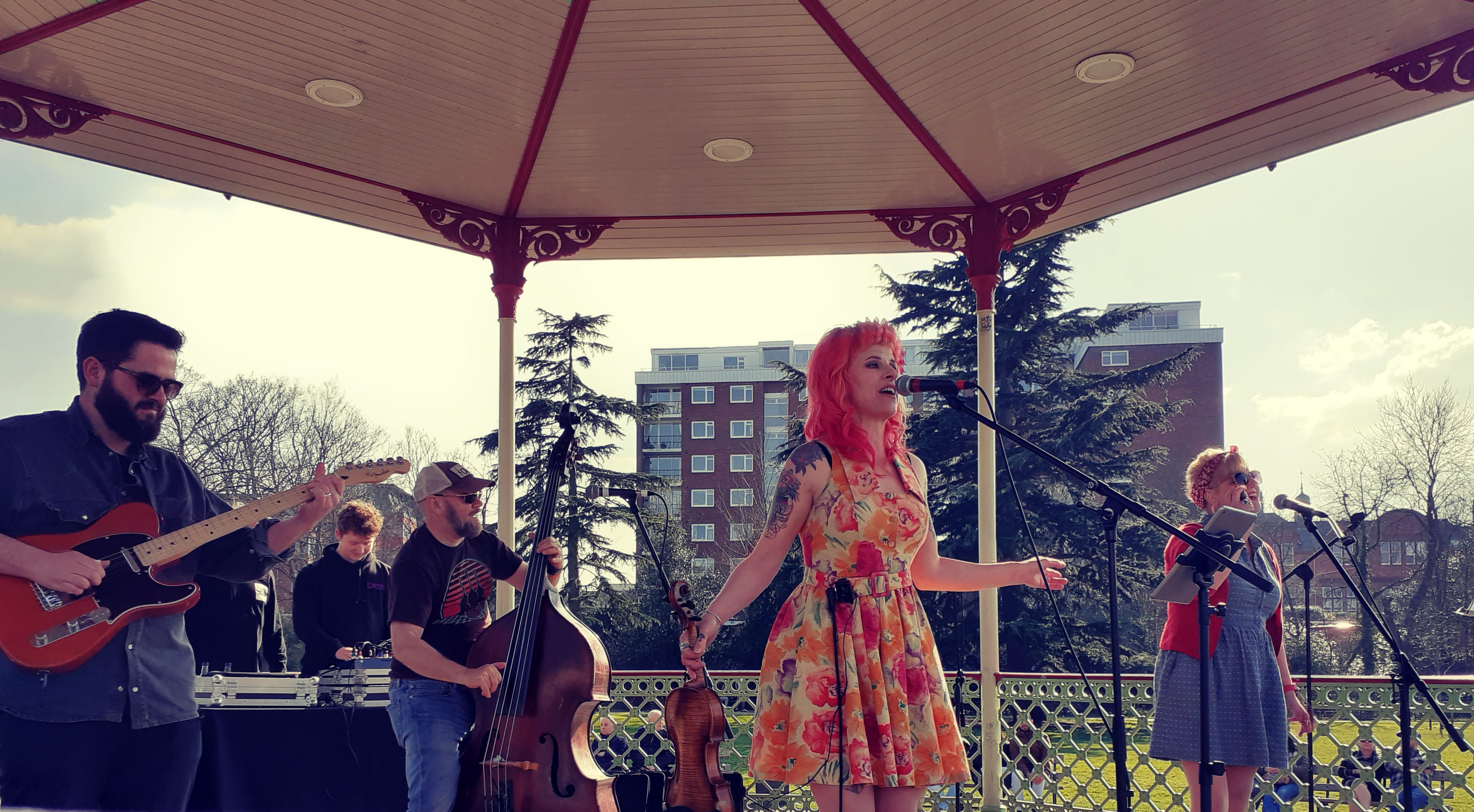 I can't quite believe that here I am, writing my third live review in four days… an idea which has been unthinkable for so long.

So many thanks to Leamington's Open Arts Festival who have launched Sunday Bandstand Sessions in the Pump Room Gardens, bringing another family friendly safe space into play.

In the sunshine which greeted us, I met numerous people whom I'd not seen in the flesh for so long & as the audience grew I could spot many other similar reunions.

First up was Levi Washington, who although I've been featuring his releases weekly in the magazine, I'd not seen live since last summer. It gives me an excellent opportunity to publicly congratulate him on winning "Freelancer of the Year" at the Leamington Business Awards: as anyone who loves local music will know, Levi has been burning the candle in past months (and suffering the physical consequences I'm afraid) setting up so many live opportunities for local talent: just what audiences & musicians need so badly. I'm delighted that the awards organisers have spotted the importance of his work (and he was also on the shortlist for the Creative Business of the Year award) despite the relatively short period of time his business has been running.

Typically suiting his set to the vibe of the day (let's face it Levi has so much material in so many modes that he could play virtually anywhere at any occasion & still come up with songs to please even the most tightly defined of audiences), we had feel good music (and I'm delighted that he felt it right to play such a high proportion of his own material), frequently magnified & amplified by generous looper usage & songs which seemed to be looking forwards to summer time & many more outdoor gigs.

He was joined towards the end of his set by his special guest Vince Ishia whose presence took the vibe into different laces, but the sunshine was present all the time, both on our faces & in our ears.

I admit that four or five days earlier, I had no idea that the band The Old Flames even existed, so tight a lid had they kept n it during rehearsals.

I'm sure you'll know Jane "Titine Lavoix" Ward both from her recent solo years but also from The Scatsville Busters: her own song with them "Where's The Boom Boom?" appears on ‘Hot Music Live Presents Volume One'. Equally Holly Hewitt has featured often in the magazine and as part of Holly and the Hounds her song "Room For One More" is on ‘Hot Music Live Presents Volume Six'.

However in all the years I've been following them & reporting on them, I'd yet to see them perform together: so the new band, which also features Wes Stanton & Alfie Amadeus of The Folly Brothers was something of a revelation.

Setting themselves primarily as a bluegrass band, as those who know the members might anticipate, although they nailed several traditional bluegrass numbers squarely on the head, they were unafraid to break through the boundary walls & cover material normally considered belonging to other genres, by artists as diverse as The Black Keys, Neil Young, Bananarama, Dead or Alive and The Rolling Stones.

It's a special moment to witness the live debut of a band (I remember well doing so for the aforementioned Folly Brothers) and I think this band will please a great many people over time: certainly there was plenty of evidence from this afternoon.

You might expect from bands fronted by Jane or Holly let alone both of them that a feel good factor would be top of the agenda & both connect so easily with crowds. Nevertheless, despite the immediacy of the impact of what they were playing, there was a great deal of interest (and more revelations) to the music fan in the details: how for example both female singers, each known for her ability to produce powerful & compelling lead vocals, worked so well together & harmonised (the traditional bluegrass tunes were sublime in this respect). But that supposes that they were the only vocalists: which is not true. Wes, who occasionally sings lead with the Folly Brothers got no fewer than three numbers & made his stage debut on banjo. As did Holly on double bass. And I haven't yet mentioned Alfie's impeccable lead guitar in several styles but most impressively his emulation of James Burton on the traditional numbers. Jane's violin playing was less of a revelation to me as I'd loved it back in her Scatsville Buster days but I'm not sure how many people present had heard it & I for one was delighted that she'd revived it.

I believe the band were aiming for a May debut, but things went so well that we heard them today instead. I loved them & when you hear them you'll love them too. They burned exceedingly brightly.

I really only started going along to the Peace Festival in 2008 after the purchase of my first DSLR camera, have always loved my music both live and ...
[10 images] END_OF_DOCUMENT_TOKEN_TO_BE_REPLACED

This Fathers' Day lark is pretty good and I certainly didn't turn my nose up at a Dad-size bacon butty and a fresh bottle to add to the ...
[6 images] END_OF_DOCUMENT_TOKEN_TO_BE_REPLACED