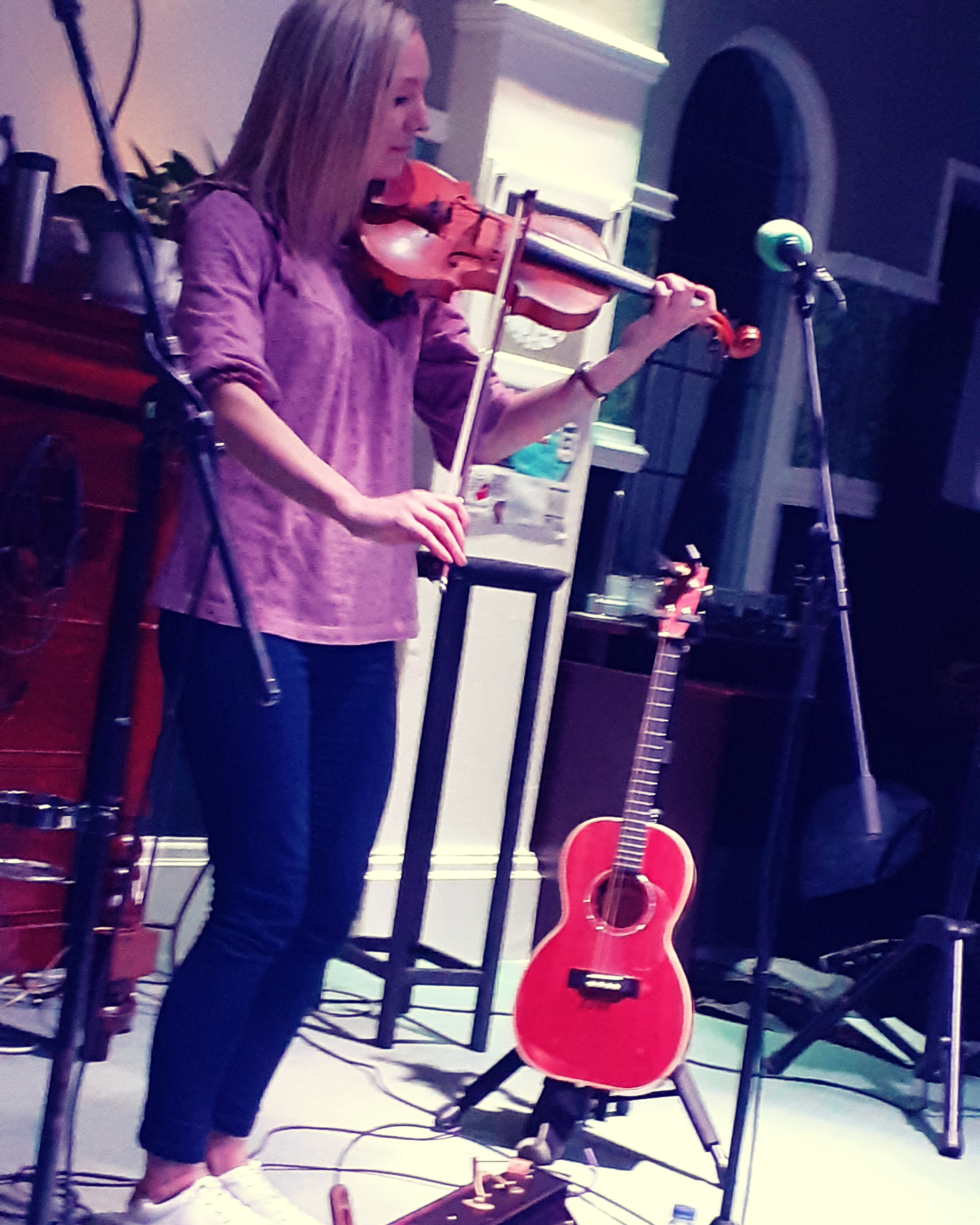 It's gives me a extra frisson of pleasure to be able not only to publish my second live review in the space of three days but one about an event hosted by "Hot Music Live Presents" in collaboration with Earlsdon Carnegie Community Library, which if you haven't visited lately is now a wholly independent charity having been closed by Coventry City Council and which is now restored to its original splendour by Alan Denyer & his team. All profits from the shows in this series will support the Library.

The first of a programme of regular early evening (family friendly)  community based mixed arts events (the planned inaugural one, scheduled for December was to have featured Ellie Gowers but her illness has postponed it) featuring on this occasion poetry, film & music (there will always be music!).

Last night showcased well known local poets  Olga Dermott-Bond and  John Watson reading from their own work, short films by Adele Mary Reed and Alan Van Wijgerden (neither of whom unfortunately could attend in person) plus headline artist, the acclaimed local folk musician Lauren South (who appears on "Hot Music Live Presents Volume Four" with "History" as part of Greengrass).

I'm delighted to say that it was one of those glorious, serendipitous evenings when not only was each element offering something of high emotional value in itself, but they interwove to create something even greater than the sum of parts.

Included in this I'd certainly include elements in addition to the talents of the performers: the Spring weather, the beauty & appropriateness of the space the Library has to offer & the audience whose interaction with the performers & responses created precisely the sense of community which had been hoped for.

Rather too often perhaps, I draw attention to the vibrant, diverse & creative health of Coventry & Warwickshire music currently (though I utterly stand by my assessment). Last night's poetry however makes me think that much could be said for that artform too. Both Olga & John were on stunning form & there was a palpable buzz amongst the audience at the break about their work: complete strangers offered me testimony to how much they were moved. Personally I did the announcements during the evening & had to compose myself a little after their sets.

Quite rightly, as with great musicians etc, their styles were totally distinct & utterly personal (that's what moved people) yet they complemented each other brilliantly.

As it happens, both of them went out of their way to emphasise how they wanted to avoid morbid themes given the Spring title, yet other (not necessarily darker) aspects of the Circle of Life crept in (it's worth noting that John works in a cemetery).

Both repeatedly drew on family memories & themes which not only kept the overall feeling of total emotional honesty incredibly high, but touched the equivalent experiences of all present deeply (which is what poets & musicians aspire to). So many people in particular were talking about Olga's poem about her Dad & a pair of secateurs….

The films also contributed to what I'd identify as a strong connective thread of poignancy which ran through the whole concert (and I'd repeat that this was despite the deliberate sunniness of many poems & songs). I'd like to credit Wes Finch (who crafted immaculate sound all evening), Lisa Franklin and the Library's Lucy Winter for getting all the systems talking coherently to each other so they could be shown at all. Ten minutes before showtime I was prepared for the worst.

It was a shame that the audience could not feed back directly to Alan & Adele as their work again was highly original & themes of childhood & family chimed perfectly with the poems & songs, but hopefully there will be other opportunities in this series for that to occur.

Last on was Lauren, & like Olga & John, she seemed totally to own the space & looked wholly comfortable with where she was & to whom she was performing. She is on a bit of a confidence curve as her experience playing has hitherto been within group contexts, so developing a solo act & repertoire is an ongoing project: not that anyone present would possibly have guessed it, such was her demeanour. She even unveiled a hitherto unperformed song, which is usually evidence of how relaxed a performer is.

Known as a violinist, that instrument made appearances within her set of course, but so did more recently acquired and developed ones: notably a shruti box and a tenor guitar, which were better suited to accompany her singing. Nevertheless, though using each independently, with the addition of a newly purchased foot pedal, she enhanced both her violin instrumentals & guitar-led songs with the shruti box in tandem, producing impressive combinations & harmonies adding most unusual textures to her sound.

As her great love is traditional music, it was unsurprising to hear songs (but certainly not overplayed stale ones) from that canon but she breathed new & different life into these: a good example being Ewan MacColl's "Fishgutter's Song" which she transformed into something much lighter & more optimistic.

Another one catalysed another of the emotional moments of the night when it stirred memories in one audience member who was singing along: she knew it from her school days but had not heard it in sixty years…. This is what makes gigs like this.

However for me the key moments of her set were her many original songs. Audiences will, understandably, be attracted to her instrumental skills, her beautiful, ethereal yet warm voice & her engaging stage manner, yet she is clearly accumulating an excellent body of unique material, complementing her traditional repertoire, yet addressing contemporary issues, often metaphorically. As she plays them more & more in solo performance, I'm sure they will gain familiarity for audiences & she was telling me of her plans to record them. I think they provide yet another wholly individual voice to local songwriting & manage generally to pull off a doubtlessly really difficult bridge between the forms of the old & the narratives of the new.

As a special treat, Lauren brought on Keith Donnelly, with whom she has been playing recently & he added filigree guitar parts to some of her songs (and one of his own), plus vocal harmonies which added extra layers to a set which set the transcendental icing to the night. It's been a few years since I deployed "magical" in one of these reviews, but it fits perfectly for this one.

Look out for the next event in this series on Saturday the 23rd of April: "Hush: A Shakespearean Celebration" with music from Wes Finch in his more Mechanical Mode.

On Saturday June 18th the headliner will be Izzie Derry.

I'd also like to remind readers of the fundraiser for Ukraine at the Albany Theatre on Sunday 27th March, at which Wes, Lauren & Keith will be among the many musicians giving their time and sharing their talent.