"Get It Wrong" & the 'Heavyweight' EP by Joe Dolman 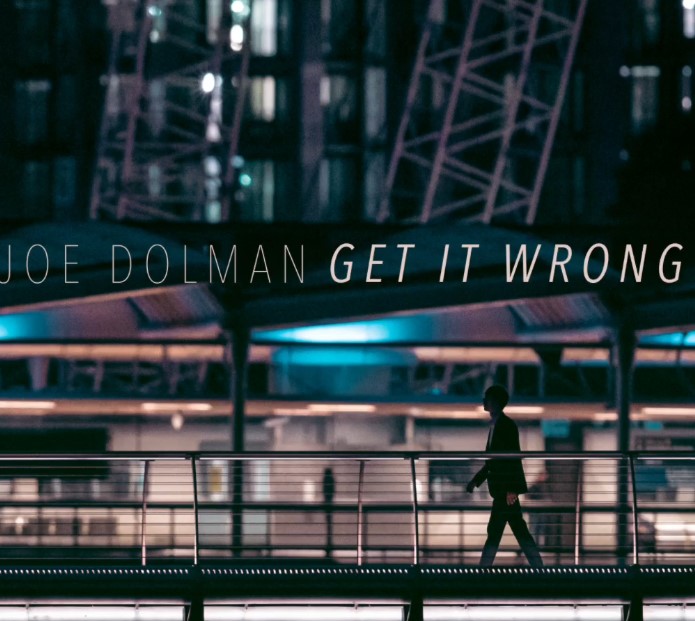 It's that moment for Joe Dolman which fortunately comes to some creative artists on a roll when you've last released a single as good as "The Lucky One" (certainly one of my favourites of his work so far) and the time comes to follow it up..

Today marks the release of that single in question & it's called "Get It Wrong", though to fully flesh out the picture, it is simultaneously also released on his new EP ‘Heavyweight' which collects together this new track, "The Lucky One", "Real World" and "Strangers" in both their fully arranged & acoustic versions: and how many eight track EPs can you think of?

Given that (assuming you've been reading my reviews & listening to Joe's previous records) you should know all the songs on the EP already apart from "Get It Wrong", I'll focus today on that one.

Probably wisely, Joe's response to the critical & popular success of "The Lucky One" is not to try & replicate it: the song was a deeply personal one with a clearly identified subject and hence quite rightly sits by itself in his repertoire. We are back then in more familiar Joe territory of the lovelorn & anxious protagonist, underconfident is his own abilities to please a lover yet confident enough to express his fears. As I've often said before, if you listen to all his songs, you don't half tend to feel sorry for him as the character he so often presents seems to deserve far better than he gets & who seems to oscillate between deep self reflection & frankly beating himself up.

I've come to the conclusion that like many excellent writers, there is a definite element of writing in character going on here: and why shouldn't he. I imagine that he must draw on his own experiences as well as those he observes & there is no reason at all why the songs he presents in the present tense should not in fact be based on feelings & thoughts he's experienced in the past & moved on from, having learnt in the process.

Above all I think you get the portrait of an artist aiming at perfection in his relationships with others: which is commendable & presumably appreciated by those concerned, and in the meantime the search for this can generate angsty songs like "Get It Wrong" which I imagine will create quite the emotional bond with an audience.

Actually this, though fitting into something of the pattern I've described above, is pretty much the epitome of these songs he's been writing in recent years.  Quite stripped back compared with some of the others (it almost approaches a skiffle feeling at moments), although as with all his songs, the internal structure is beautifully crafted to produce the variety of dynamics which keep you engaged, overall it's a rather melancholic arrangement which suits the words like a proverbial glove.

Once you've had the chance to enjoy the music, please take a look at the cover artwork of the single again as it's rather special. Emilié Cotterill of Transluceo Photography had the idea of photographing Joe walking on London's Millennium Bridge at night while she shot him from Southwark Bridge, 300 metres downstream. She got hold of a special lens, but you have to raise your hat to her for the vision & the skills to pull off such a photo.

I honestly can't say that I was too surprised by the release today of an acoustic companion  EP to Joe Dolman's most recent ...
[1 image] END_OF_DOCUMENT_TOKEN_TO_BE_REPLACED

Out today from Joe Dolman is his latest single which rejoices in the title of "Strangers", the follow up to the successful "Real World" which itself ...
[1 image] END_OF_DOCUMENT_TOKEN_TO_BE_REPLACED

It's been above a year since I last got to review a Joe Dolman release (his collaboration with Millie Tilby "Let's Go Home") so it's ...
[1 image] END_OF_DOCUMENT_TOKEN_TO_BE_REPLACED

This is rather an unusual release to be reporting on.
[1 image] END_OF_DOCUMENT_TOKEN_TO_BE_REPLACED

I have recently accused Joe Dolman of being prolific in his output and here he is again with a brand new release a month since I last reviewed him.
[1 image] END_OF_DOCUMENT_TOKEN_TO_BE_REPLACED

I think that we can all by now agree that Joe Dolman is one of the most talented & popular artists from Coventry & Warwickshire & to that add "one of ...
[1 image] END_OF_DOCUMENT_TOKEN_TO_BE_REPLACED