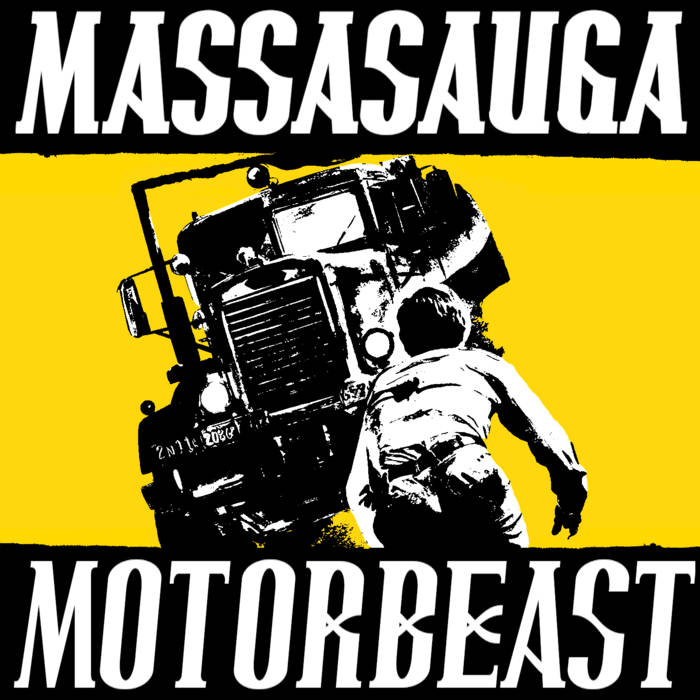 One of my favourite movies by Steven Spielberg, has always been "Duel": unfortunately as it was his 1971 feature length debut, it has been grievously overshadowed by so much he has created afterwards which is a pity as this one shows how great a director he could be without special effects nor presumably much of a budget. It's a genuinely scary tale of the repeated attempts of the driver of an antiquated truck (whom we never actually see) to drive a car driver off the road on a long cross-USA trip: for reasons which are far from clear. I'm sure I'm far from the only one to know this film (though I guess a lot of Spielberg  fans may not have seen it), yet it's still something of a thrill when our area's greatest fuzz rock duo, Massasauga, use it as the departure point for their new single, out this afternoon, called (appropriately enough)  "Motorbeast".

As the film essentially only portrays the truck as the antagonist without overt reference to the consciousness controlling it, so Conrad Lummus & new drummer Adam Stewart (in his second single for the band) are able to evoke images of a hunt across arid, empty country with a machine chasing down a human quarry.

If this sounds a bit like some sort of robot narrative, all about clinical & futuristic violence, then you don't know Massasauga. This is visceral like all their work: just as the truck in the film is far from cutting edge: it's dirty and past its mechanical prime, so is this story far from cyborgs. The tale the two tell is as much about the fear as about the nature of the threat.

Pretty much all their work is of course about fear: much gothic in form, though not necessarily set in the hours of darkness: "Motorbeast" is about terror ‘neath the burning skies. It echoes the rather Latin tendencies of earlier work like "Bullfighter" and shares with that great single the notion of two very different forces arrayed against each other: one seeking the kill, the other prepared to fight to save itself.

"Motorbeast" is destined for an EP to be named ‘Exorcisms and Psychic Vision' and it will be interesting to see placed in juxtaposition with their other recent tales of fear: "Psychic Visions", "10-46" & "Switchblade": all frightening tales but each very different in its evocation.

"Motorbeast" in fact goes a bit further than these in attempting (successfully) to depict the narrative directly through the music: there are various guitar snarls which while pretty much all part of the Massasauga musical DNA, in this particular instance are designed deliberately to conjure up the mental picture of a carnivorous creature about to pounce & consume, or its rage at not succeeding.

Equally the mood is one of relentlessness (like the truck driver, the Motorbeast once started, marches grimly on without break or need for rest) and a chilling lack of humanity in Conrad's vocals: whatever the motivation of the Motorbeast might be, it clearly doesn't give a damn about the feelings of its prey: it probably doesn't even conceive of what feelings might be.

And you get what you want from a Massasauga song: riffs galore, atmospheric sonic attacks & thunderous drums which like Keith Moon's, carry the tune more than drums are supposed to do.

The other reference point which struck me a little was the similarity in the name of the song to Motörhead: whether that was intentional or not, I don't know I'm afraid, though you do get the same wall of sound, creating in itself an indelible reaction while retaining the clarity of vision of a melodic song within it. You also (at least I hold my hands up to this) get the vicarious thrill from the chase & dare I say enjoy listening to what is someone being pursued on a lethal quest. I probably ought not, but it had that effect on me.

There is (as ever) an excellent video which references the source film at:

Out at 1800 today was the long awaited EP by Massasauga, ‘Exorcisms and Psychic Visions'  which is also a compendium of most of their recent ...
[1 image] END_OF_DOCUMENT_TOKEN_TO_BE_REPLACED

Out today at 8 pm is the new Massasauga single, with the sort of title you have come to expect from this band with a penchant for the darker side of ...
[1 image] END_OF_DOCUMENT_TOKEN_TO_BE_REPLACED

Way back in the day, Hallowe'en was a rather different sort of festival, a sort of development of the pagan Samhain harvest festival but ...
[1 image] END_OF_DOCUMENT_TOKEN_TO_BE_REPLACED

It was back in April when out of their "7 Nights of Terror" competition, Massasauga fans voted the chilling "Switchblade" to be their single.
[1 image] END_OF_DOCUMENT_TOKEN_TO_BE_REPLACED

You may remember when back in February Massasauga invited you to participate in their "7 Nights of Terror" wherein they shared teasers of seven songs ...
[1 image] END_OF_DOCUMENT_TOKEN_TO_BE_REPLACED