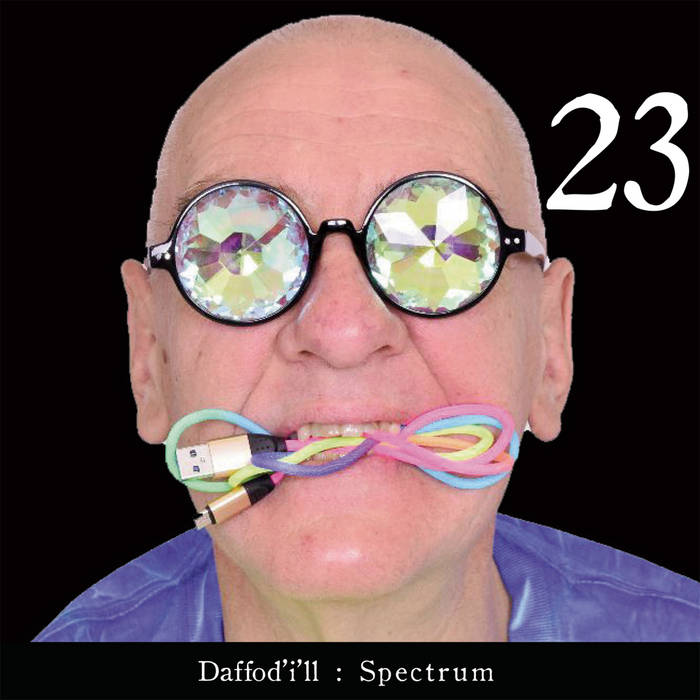 After last week's release of no fewer than four new albums, this week Daffod'i'll is back with just one album: his twenty third, namely 'Spectrum'.

I have to hold my hands up high at this point: I try hard to review artists, especially those involved in the "Hot Music Live Presents" project, but the sheer scale of his recent releases has meant that I haven't yet managed to find time to listen properly to any of albums sixteen through to twenty-two which is why you'll not have seen any reviews of these in the magazine: just news informing you that they were out. They remain on my "to do" list, but as Dill informs me that he has another nine at various stages of completion, the possibility of my being overwhelmed by Daffod'i'll music seems high.

I, as you might imagine, have raised my incapacity to cope with him & if I am not able to even listen to them all, I wonder if many others are. I'd be interested in hearing from any readers who have managed what I haven't in this respect. Of course with Dill, the creation of all this music is about more than pleasing any audience: it's therapeutic for him in dealing with the mental health issues he has articulated so openly & arguably this compulsive need to release so frequently may reflect these. As I said to him, it's not really the number, it's the rate they appear before us, but although he took my point, I suspect he finds it difficult to slow down.

Regarding ‘Spectrum' itself (I suppose the title might refer to the autistic spectrum, although the cover suggests a PC connection), it  is one of the records in his canon with simpler track titles: songs are based around ideas, often abstract, rather than exploring the lyrical possibilities of puns or word play.

As I said in reviewing albums 14 & 15 (only two months ago), while his first eight albums might to some extent represent an artist finding his feet in a solo incarnation, the next few represented artistic highs, which themselves were succeeded by a sense of a plateau having been reached. Eight further releases later, that really seems to be the case.  Fans of his earlier work will be interested in his revisiting of the "I" classic "I am I" in a style more reminiscent of the later lineup of that band than the one which cut the single, but generally ‘Spectrum' revisits ideas and approaches which you will find on previous albums & while he seemed to get the most out of many of these some time ago, it's hard to see where some of them are going.

Within a few weeks, going by his plans, Dill will have three hundred & twenty solo tracks out: none has been played live yet, I don't think any has been played on the radio and to be honest, I suspect even the most diehard of his fans will not have played them all: certainly not multiple times as he's not given them the breathing space to do so.

Amongst all the ones so far shared, there are some interesting ideas exploring his take on modern dance music, on cultures from around the world etc and he has done an excellent job of upskilling himself to add instrumental sounds which reflect both of these and create interesting & varied textures to many of the songs. I personally have always loved his dub tracks in particular. A significant percentage could form the basis of an interesting live setlist & quite a few are radio friendly, though this latter opportunity has not been effectively seized as he had no strategy for trying to get airplay as albums came out and no station is going to sift through over three hundred tracks.

I certainly feel that a slower, more measured release strategy would help him share his ideas effectively. I'm delighted that simply making music brings him so much fulfilment, but I think the potential for audience feedback could bring him yet more.

I would urge him next to consider collaboration with other musicians: this would obviously aid the possibility of live gigs but also I think change the pace of his creativity so the rest of the world (myself included) could keep up with it.

Although after album number 34 ‘SAY AHHH!' from Daffod'i'll back in April he said he was taking a break from this deluge of ...
[1 image] END_OF_DOCUMENT_TOKEN_TO_BE_REPLACED

Today sees chapter 34 in Daffod'i'll's solo album series with the release of ‘SAY AHHH!' with its tracks being "Conquer All", ...
[1 image] END_OF_DOCUMENT_TOKEN_TO_BE_REPLACED

Eight days after my last Daffod'i'll review, here he is back with another album (just the one this time, although he apparently has another ...
[1 image] END_OF_DOCUMENT_TOKEN_TO_BE_REPLACED

In the four days since I reported on the release of the  last four Daffod'i'll albums, he's back with yet another four today.
[4 images] END_OF_DOCUMENT_TOKEN_TO_BE_REPLACED

After releasing three more albums about as many weeks ago, Daffod'i'll  is back with three more plus another compilation ('The Best ...
[4 images] END_OF_DOCUMENT_TOKEN_TO_BE_REPLACED