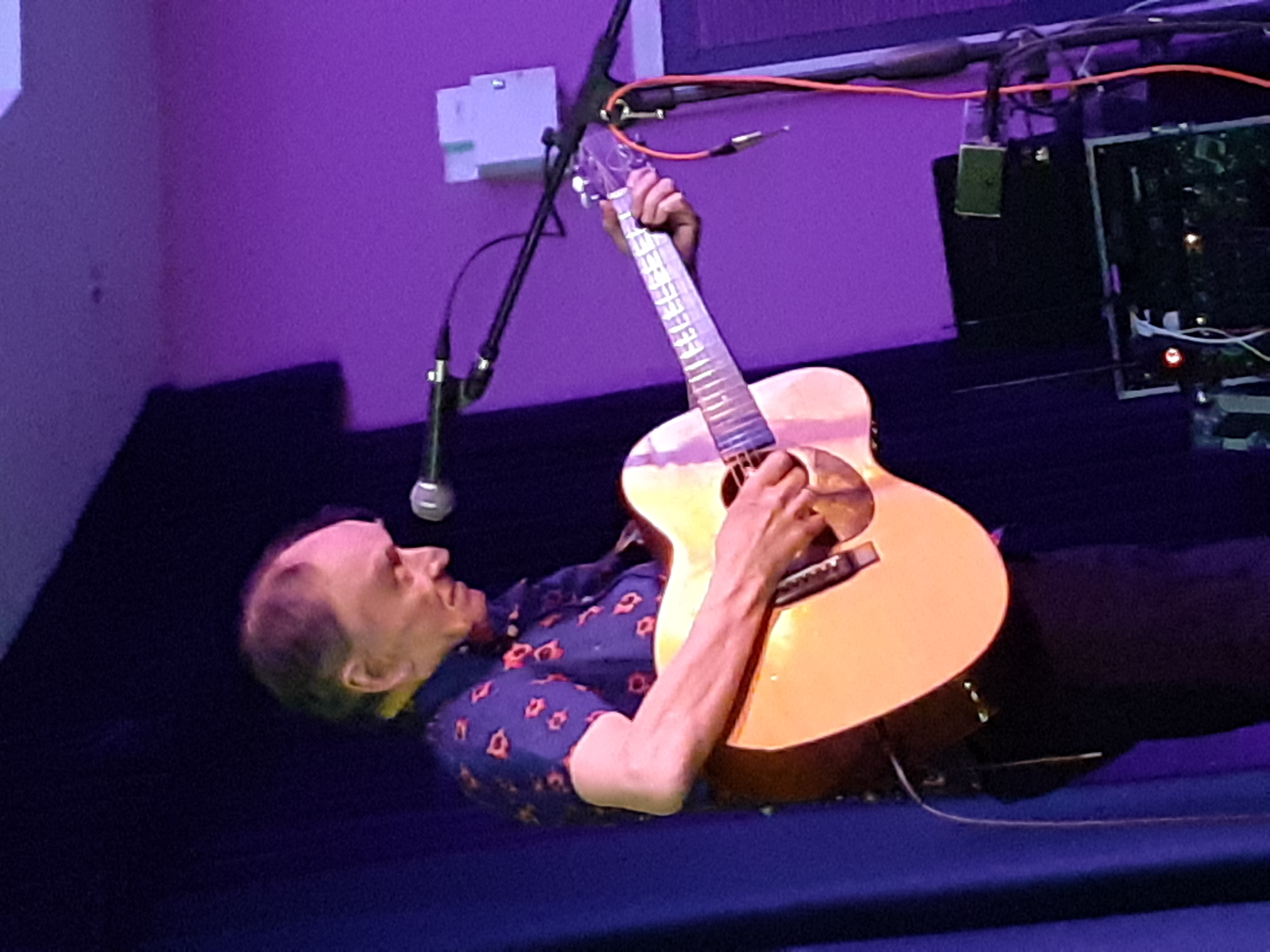 My tendency as you know is to focus in particularly on local Coventry & Warwickshire artists for my reviews: in the last couple of years certainly focusing  more on their releases than their live performances (though hopefully the balance will right itself in 2022). Very occasionally however it's a privilege to write about an artist who is gracing this area with their talent but who lives elsewhere yet has a reputation which knows no geographical boundaries.

Thus it was my great pleasure to attend the inaugural event for the Stratford Playhouse Folk Club last night, headlined by Martin Carthy who will need no introduction from me, supported by Alcester's Jack Blackman.

However as well as the chance to attempt to capture my response to a musician who has had one of the most profound impacts on music, there is also a very significant local music scene story to tell here.

It is greatly to the credit of Doug Armstrong & colleagues that they have launched such a monthly club and intend to feature both our local artists and guest appearances from the most stellar of musicians (look out for the upcoming schedule!). To do so when COVID19 has far from departed the scene shows courage, belief & commitment which deserves my respect & all our support.

The setting was the really appropriate foyer of Stratford Playhouse which enabled a far more intimate setting than the auditorium could have provided, yet it was still so spacious that I felt very comfortable with all the distancing which was possible: and nevertheless found myself with a front row seat for a gig of such high quality. The sound team also ensured that the listening experience truly reflected the level of the performances.

In choosing a pairing for such a gig, I guess various factors come into play: you probably want compatibility of repertoire but so they complement each other rather than essentially play similar material. With Jack Blackman (a star who has already risen so far in the roots world that only a player of Martin's calibre could "relegate" him to a support slot), you have such a combination.

Lord knows Jack is an avid historian of roots music & demonstrated it last night, though his foray back into the 1920s was a mere excursion into the past compared with Martin's. Jack touched base with the headliner's love of sharing the obscure yet worthy of songs from beyond our own lifetimes, yet principally he demonstrated Martin's actual impact on our music: by playing a set heavy with his own original compositions (and mostly his most recent ones): "folk" is a living form thanks to its revival by musicians such as Martin & despite the dour inclination of a few in that world to insist on a fixed canon, a living tradition demands & encourages fresh writing. This we enjoyed material such as "Self Isolation Song" (which can also be found on ‘Hot Music Live Present Volume Four') and the "Ballad of Clopton House" both of which were reviewed in the magazine.Tellingly too, Jack bookended his set with songs which showcased his wonderful skills as a slide guitarist and this gesture too had significance: it both distinguished his material from Martin's (whose set was not blues orientated) while offering a complementary roots tradition which fitted in well with what was to come. It also evidenced the connection between the two players, both of whom are renowned for their instrumental skills & who can hold audiences of any size with a simple unaccompanied acoustic guitar with no effects added.

This led me to reflect upon a certain paradox in roots and folk music. The original material both artists love & champion originated as vernacular songs: created by & intended to be performed very widely by people with a range of musical experience & skills and without necessarily much access to formal instruments. Nowadays however we flock to hear people like Jack & Martin play: musicians who are virtuoso instrumentalists yet playing these same traditional songs.

A major part of processing this paradox is that both clearly love the old songs they play: lengthy explanations of their origins and even more tellingly why they have chosen to play them, gave us extra understanding of pieces we probably had not heard before & enhanced our appreciation. When you love a song, clearly the extra skill you bring to playing it reflects that: it's an act of respect. At any rate, their playing, thrilling as it was, never at any point distracted from the song at the heart: and each has a knack of playing in ways I couldn't possibly follow while making what they were playing sound "right" and even simple.

One very good reason that I haven't written too many reviews of artists like Martin is that he has been written about so many times at some many levels of critique that not only have I little to add beyond a description of the concert in question, but it seems rather impertinent of me to even attempt to comment.That said, there were many lovely touches, some human, some musical which I feel I'd like to pass onto you. Firstly, Martin is a man who lives music: from his onstage comments plus a brief chat I was lucky enough to have with him backstage, clearly the last two years have greatly reduced his live opportunities and I think that hurt him: he certainly expressed his personal enjoyment of the night (and he played two substantial sets & I got the impression that had midnight & Storm Eunice not been hoving into view he'd still be playing) and I could see him visibly responding more and more to the audience response & the sheer pleasure of playing as the evening wore on. One of the joys of the format which Doug had set up was that he was able to interact with the whole audience in a very relaxed & easy way (there was a long & interesting interchange with an audience member, sitting as far away from him as the space dictated, on differing lyrics for a song he performed a cappella).

The other point which was very much in my thoughts before & during the concert, was this was a man who had lost his wife of fifty years, the incomparable Norma Waterson, just over a fortnight earlier: I certainly would not have been surprised if he'd not been ready to gig & although the matter was not expressed in public throughout, I sensed that it imbued the whole occasion for all involved. That he included a song he normally performs with their daughter Eliza ("Daughter In the Dungeon") and "The Eighteenth of June" which featured in Norma's brother Mike's repertoire, may possibly have been oblique emotional responses…

One song I certainly did not expect to feature was Martin's setting of "Scarborough Fair" which as he put it "carries a lot of baggage for me". Nevertheless he took the opportunity to make gracious comments about Bob Dylan & Paul Simon on the matter & made it clear that the baggage had absolutely nothing to do with either of them (as I'm afraid myth tends to keep perpetuating) but more to do with what he wryly referred to as being asked to sign away the rights to a song he had never owned anyway.

Other than that, what struck me about his set was how it illustrated the differences between his generation and the current one he has inspired. I honestly don't think he had a setlist for starters (there certainly wasn't one on view, though it could have been in his head) this man has so many thousands of songs in his memory that he can pull them out at will. These songs tend to be pretty long as a rule. Martin is billed as a "folk" musician but he kept on using the word "traditional" in his talk & I think that's probably more how he sees himself. He clearly loves finding songs he has not heard before or new tunes for ones he knew & his descriptions were more peppered with how & by whom these were brought to his attention than any other issue.  One of the best examples was from his time exploring the traditional songs of Newfoundland & how he felt the singers knew all his songs but he neither knew theirs nor had come across melodies  such as they sang: and when he performed "Nancy of London" you knew what he was on about…

The songs as a say were long and intricate: certainly with the lyrics (the vast majority were narratives, whether true, fictional or "nonsense") and also with the guitar parts he played: how marvellous to have all that in your head to draw on at will.

Equally, if you noticed what he was doing during his long & detailed between songs discourses, he was tuning his guitar. Few consecutive songs had the same tuning & to be able to do this repeatedly by ear (no tuner for Martin!) while talking again tells you a lot about the level of his skills.

With an artist like Martin Carthy, you certainly go to appreciate the skills he has, but you also delight in being introduced to songs you've never previously heard: and we were certainly treated to that. However another surprise (and a much valued one as far as I am concerned) was his blazing version of "John Barleycorn" which was the final song apart from the encore of "Daughter in the Dungeon": he made it clear it was a perennial favourite of his & whether the inclusion was a gesture towards getting out playing live again or not, or a release of frustrations from not playing, perhaps only he knows.

To finish more or less where I began, though this was a splendid evening, it is merely the first of monthly folk club gigs at Stratford Playhouse & not only is this venture going to be of the highest standards & value for your money, as live music rebuilds in Coventry & Warwickshire, we need to support venues & promoters prepared to stick their necks out & put evenings of music on: especially original music. I'll certainly be back there.

Last evening's Stratford Playhouse Folk Club meeting was as intriguing a juxtaposition of two talents as its predecessors.
[5 images] END_OF_DOCUMENT_TOKEN_TO_BE_REPLACED

Having reported on last month's inaugural Stratford Playhouse Folk Club gig, I was delighted to make its follow up as well.
[8 images] END_OF_DOCUMENT_TOKEN_TO_BE_REPLACED