"Miss Me" by Levi Washington 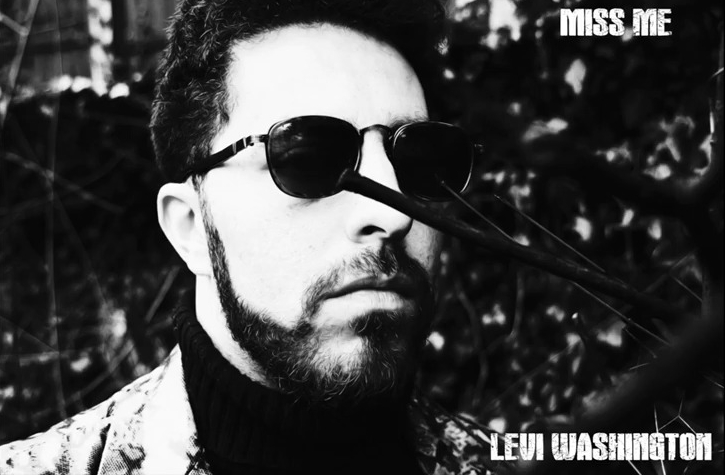 You can't fault Levi Washington for ambition: trying to release a new single every week against the background of organising so much live music is a big challenge, especially given the consistent quality & range displayed. You can forgive him (I certainly do) for the odd week when his song appears on a Tuesday or Wednesday instead of the target Monday or even last week when it just wasn't feasible.

This week fortunately he is right back in action with "Miss Me", a composition dating back some three and a half years and which apparently only took him a short period to complete: something which is demonstrated in its immediacy & drive.

It's another hard to categorise track with a strange and attention grabbing arrangement: a sort of hardcore steampunk country sound which approaches what The Band might have come up with if they had hung out more at CBGB than the Big Pink.

Over the raw & raucous sound, Levi sneers a great deal more than I can recall him doing so, yet intriguingly he cites Luke Concannon as an influence on it: something I really didn't pick up on myself on first play. Certainly Luke tends not to go very Liamesque as Levi approaches here, though he equally does not flinch from delivering hard messages at need: albeit in a more oblique fashion. Perhaps what he means is the rootsiness of the delivery? What both writers do share is a common sense of humanity in their message: even the most cutting of critiques are delivered from such places & condemnations laced with as much compassion as the situation allows for and I think "Miss Me" scores in this respect: not least because the song goes sufficiently over the top often enough to suggest that there is tongue in cheek exaggeration in play here and the good humour deployed offsets the impression the tone of delivery may give.

So don't you worry: the bark is definitely more intimidating than the bite.

It's back to business nearer usual for Levi Washington with the release of "Same Ole U".
[1 image] END_OF_DOCUMENT_TOKEN_TO_BE_REPLACED

It was grand indeed to catch up with Levi Washington live on Sunday on the Bandstand, but it's back to the weekly business as usual now with his ...
[1 image] END_OF_DOCUMENT_TOKEN_TO_BE_REPLACED

I was pleased to hear that Levi Washington is managing both his health issues & his rapidly expanding portfolio of commitments running live events ...
[1 image] END_OF_DOCUMENT_TOKEN_TO_BE_REPLACED

I'm sure many readers will have been saddened to hear of the illness of Levi Washington last week and his consequent hospitalisation.
[1 image] END_OF_DOCUMENT_TOKEN_TO_BE_REPLACED

After the angst of last week when he agonised over the mix of "Carrie, Baby" until Wednesday & the existential angst of the preceding "Check 1, 2" ...
[1 image] END_OF_DOCUMENT_TOKEN_TO_BE_REPLACED