'Wake Me Up Tomorrow' by Street Arts Project 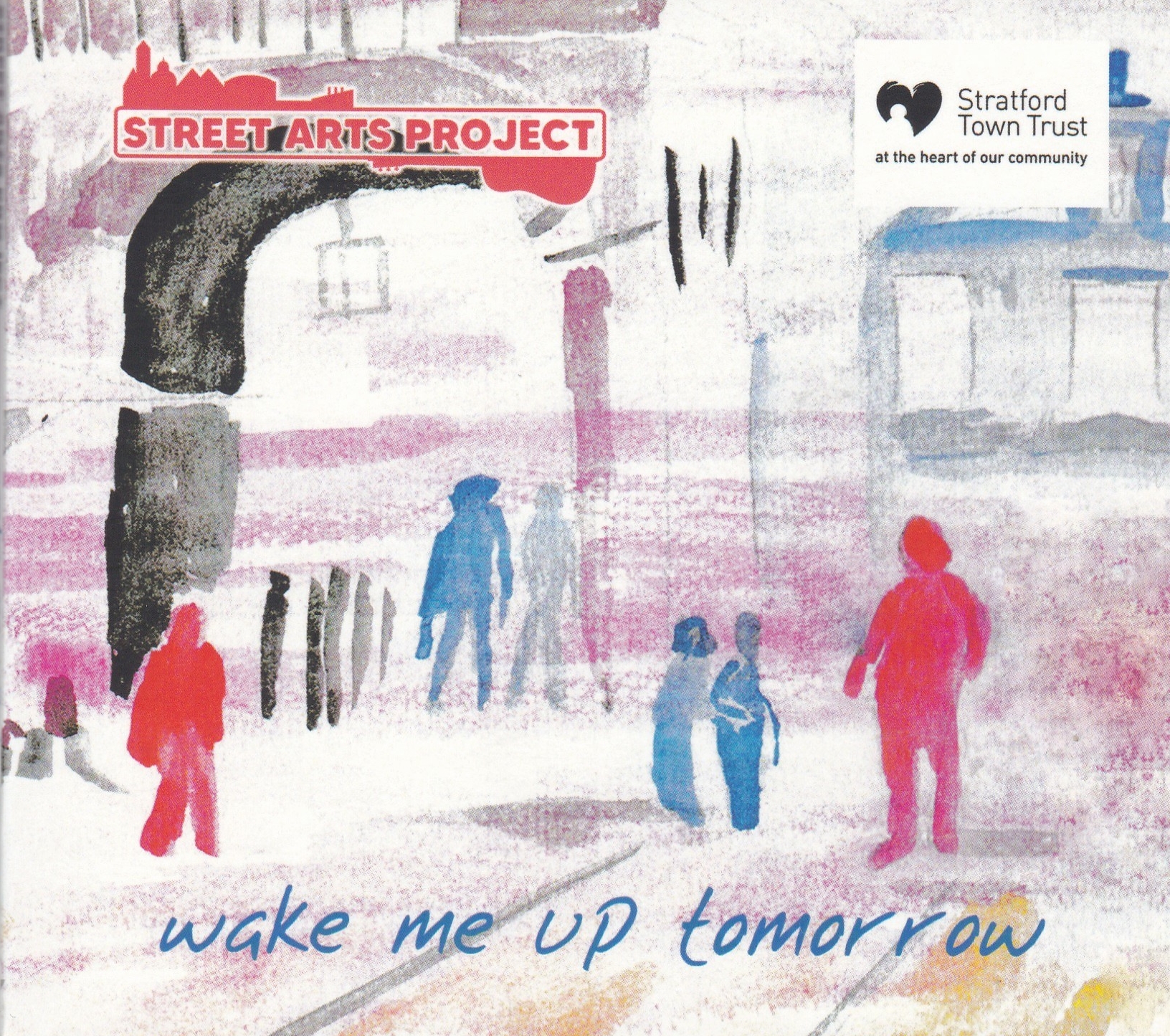 I'm delighted to be able to report on the brand new album by the Street Arts Project from Stratford which is released on the 14th of this month & which will assist their work with the homeless and vulnerable citizens of that town, namely ‘Wake Me Up Tomorrow'

I'm sure that you'll recollect their previous album ‘Hope' came out back in 2019 as we reported here & you will also I trust have read our review of the single "Isolation" which came out during lockdown & was shared by the official John Lennon Facebook page (kudos!), was praised by the likes of the late Janice Long plus Curtis Stigers and Marc Riley and raised a large amount of money for the project.

That single featured no fewer than twenty nine different musicians, among whom were several ‘Hot Music Live Presents' artists including members of Evergreen, Jack Blackman, Wes Finch, Ben Haines  & Chessi O'Dowd plus other well known names such as Nigel Clark.

Several of these appear on the new album as Jack, Wes & Nigel provide the professional base of the thirteen tracks, aided by project members Laurence (vocals & the cover art), Rebecca (vocals), Pat (vocals, acoustic and electric guitar), Jonas (vocals and acoustic guitar), Jon Doran (fiddle) and Louis Scheuer (accordion). In addition some tracks were written by Josh & Mark though they are not credited as performers. (The album was produced at Rhythm Studios by Jack, Nigel & Wes with Euan Blackman & Paul Johnston. Dom James mixed it and mastered it & project facilitator Doug Armstrong was Executive Producer).

Each of the thirteen songs was developed through the Street Arts Project workshops, starting with thoughts, lyrics, poems etc and with the help of the professional musicians, developed into the form you hear on the album. The resulting songs are:

As Doug describes the workshop sessions: "we give a voice to experiences & feelings and a chance to unlock a creativity that the participants hadn't previously known how to articulate or share. Fun, at times bizarre, occasionally sad but always real. Just like life".

I think the results speak for themselves & you need to hear the authentic voices yourselves directly. It must have been a fine balance for the professional musicians, helping shape the raw material into forms which could sit on a professionally released album, yet not impose their own personalities on the unique stories of others: and they do it very successfully I must say.

At this point, I'd like to state my general approach to reviewing this album: in order to produce a review of a length which ensures people read it through, I tend not to give full detailed accounts of each track on an album: I tend to focus more on ones which "stand out" to me and I guess there is a thin line between "stand out" and "my personal favourites". In the case with ‘Wake Me Up Tomorrow', I think that would be grossly unfair: every single track is as deserving of our equal attention & praise as is every participant: the workshop attendees for sharing their stories & having the confidence to raise their heads about the parapet to work on such a high profile project, the professionals for their time, dedication & delicacy in helping shape the tracks.

Each song/story is worthy in its own right: a unique narrative & each infused with the experiences, values & philosophy of its writer. The process has clearly worked very effectively to ensure that the initial stories come across with great clarity & hence their innate truths. I'm guessing some workshopping has gone on around finding the best structures & the arrangements and production are crafted with light touches: there is absolutely no obscuring of the essence of any of the songs behind layers of virtuoso playing or bombastic over production: and the styles of the songs themselves, each of which is  presumably true to the original vision of its writer are agreeably diverse which creates a good balance within the collection: we open with something of a rocker but there are also the folkier acoustic numbers you might anticipate, bits of edgy new wave on the off beat, Americana, blues, pop & even old school soul etc. Something for everyone musically, but ultimately as interesting & beautiful settings for the lyrics.

One track I do need however to single out for you (literally) is Jonas' title track, as it out as a single on the day of the album itself. Jonas himself comes from Lithuania & has spent years living rough in a tent and it's an epic, slow building song, intense but with an ultimately optimistic sense.

The following day (Saturday 15th January), many of those involved in the project will be launching it at a free concert at Stratford Play House.

‘Wake Me Up Tomorrow' is a most commendable artefact & I am delighted to share my thoughts about it with you. It's for a really important cause & its sale will affect lives directly: so you know what you need to do don't you? However the   process of creating it (and what you get at the end is high quality music, indistinguishable from anything else we review in the magazine in that respect) was itself transformative: those involved will have regained confidence in themselves, possibly knocked out of them to various extents during their years of challenges, developed their skills & articulated stories we as listeners will benefit from hearing as it adds to our understanding of the world we live in & who we share it with. It's a sobering thought but the album salutes the memories of project members Paul & Bryn who were part of the first album but didn't make it to the second one.

So please acquire the single & album: enjoy it, appreciate what it's saying, tell others about it, pop along on Saturday, keep an eye & ear out for more Street Arts Project activity & maybe ask yourself "what can I do to help?". ‘Wake Me Up Tomorrow' has a ton of potential to catalyse change and action in all sorts of forms & I'm pleased to report that the workshop sessions should be recommencing this month.

As you'll know from previous writing in the magazine & the inclusion on ‘Hot Music Live Presents Volume Eight' of "Wake Me Up Tomorrow", ...
[4 images] END_OF_DOCUMENT_TOKEN_TO_BE_REPLACED

You might very well like to check out today's release of a charity single appropriately called "Isolation" by ‘Street Arts Project & ...
[1 image] END_OF_DOCUMENT_TOKEN_TO_BE_REPLACED