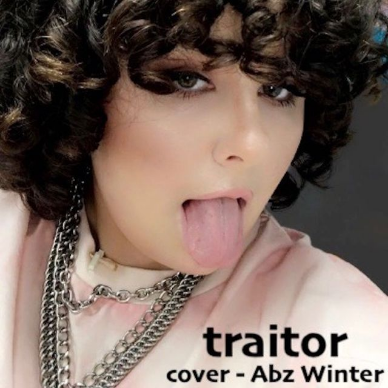 As I'm sure most if not all of you are aware, Abz Winter was selected for the new television talent show "Walk The Line" at the end of 2021 and after appearing on that show, drew praise from such figures as  Gary Barlow, Craig David  and Dawn French: all of whom have been around long enough to know talent when they see and hear it and experienced enough to know that giving false praise helps no one. Although the voting process did not enable her to proceed further through the show's format, which is a shame, I think getting this level of exposure is in itself not just the huge leap forwards in her career that many local people (including this magazine) have just been hoping for but predicting but the feedback from figures of this stature will enable her to go into 2022 confident of still further swift & steep upward career progress: which she deserves as much for her very hard work and positive outlook as well as her innate writing & performing talents.

As it happens, the show's format required her to sing a cover version at this stage: I'm impressed that had she reached the next stage, she could have performed one of her own compositions as I feel her writing deserves just as much exposure as her vocal skills & it's a credit to the show that this was an option.

In the event, she went with the song "Traitor" by Olivia Rodrigo as she felt it provided her with a suitable vehicle to demonstrate her singing, and she has been proved right.

Which brings us neatly to the real focus of this review, as demand from her fanbase has been so high that she was persuaded to go into 14 Records and cut a studio version with Matt & Gemma Waddell, which is now out as a single so you can re-experience her performance as many times as you wish. I'm sure given the importance of this event that it really doesn't matter if it breaks the sequence of so many well written original releases & she'll be back very soon with another one of her own composition.

One issue I did put to Abz which I needed her help clearing up, was my concern about her own state of happiness. As any of you who have had any contact with her will know, she has a very sunny & cheerful disposition and this is a huge factor in why her live shows (which initially built her reputation)are so successful: people warm to her instantly and good will is generated by her personality even before you experience her talent.

However "Traitor", whatever its musical qualities are, is quite a bitter song lyrically and as you'll have seen from our reviews, many of her recent singles have been of a similar ilk: "Under Me", "Money", "B.S.", "Faker" etc: all excellent songs in their own right but taken as a sequence, it had me worried for her.

However you'll be pleased to know that my worries are unfounded: she is as positive as ever. "Traitor" was selected more for its potential as a vocal showcase than its message and as for her own writing, I had not entirely appreciated that given when some of the songs were written, she felt that her own life experiences then were insufficient to inspire many songs and therefore she drew on those of a range of friends etc: I must say listening to the songs you have to feel for her friends a bit, but their misfortunes have made for some interesting material with a certain amount of bite.

Moving forwards though, I hope she will now be able to share more songs which more reflect her own very positive & successful life & philosophy. Taken as a set, you can forgive listeners (myself included perhaps) for taking the recent singles as being a picture of Abz herself & such an impression would be as false as you can imagine. She has an album due for release this year & I'm sure that will be an opportunity to set the record straight & capture the personality so many love.

I don't want to jinx Abz, but I think her "Walk The Line" moment was so significant that with much new original material to help her exploit her raised profile in 2022, she could soar way beyond the bounds of Coventry & Warwickshire. If that does happen, then though their gain may be our relative loss, I'm sure everyone would wish her all the best for the success she deserves & has worked so hard towards these past years.

Out this morning, as a fanfare-free surprise for her fans, is a new EP from the irrepressible Abz Winter entitled ‘Just Wanna Be Me'.
[1 image] END_OF_DOCUMENT_TOKEN_TO_BE_REPLACED

That irrepressible artist Abz Winter is back on 8th October with her latest single "Under Me", her follow-up to "Money" from July.
[2 images] END_OF_DOCUMENT_TOKEN_TO_BE_REPLACED

As her follow up to the popular "B.
[1 image] END_OF_DOCUMENT_TOKEN_TO_BE_REPLACED

Abz Winter has only gone and done it again hasn't she? I love the way that although her game has never needed raising (it's been at the top ...
[2 images] END_OF_DOCUMENT_TOKEN_TO_BE_REPLACED

It's actually been a year since we shared the news about "Jump" by Abz Winter with you, a period of time between releases which would have ...
[1 image] END_OF_DOCUMENT_TOKEN_TO_BE_REPLACED

It's good to be able to report to you that Abz Winter is following up her very well received (not least in the review in this magazine) single ...
[1 image] END_OF_DOCUMENT_TOKEN_TO_BE_REPLACED