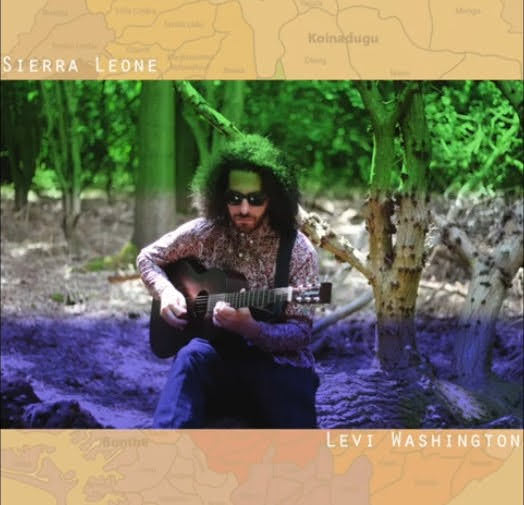 This week's Levi Washington single took me by surprise: though in a wholly benevolent way. Not only was I already aware of "Sierra Leone", but it is a favourite of mine amongst his work and I'd even singled it out for praise in my review of his performance at this year's "Art in the Park" event in Leamington.

However although a well established part of his repertoire, the only time he'd released it to date was some five years ago (on his ‘Fable Pureé' EP) with a production he felt he could improve upon and with a different instrumental approach: hence today's event.

Certainly listening you can appreciate how Levi has honed the sound to bring even more out of this excellent song, so many thanks to him for that.

I've been very positive about all his recent singles in this campaign and they have been a most diverse selection, with some very challenging ones (both sonically & emotionally) in there, and each merits your attention. Each adds its own unique facet to Levi's overall reputation & helps reveal what a complex and multi-skilled artist he is. That said, if you had to pick a tune out from amongst them to represent him & maybe select as the prime one for promotion to push him into wider recognition, then I'd probably suggest "Sierra Leone".

It's not his most experimental track, it doesn't push envelopes as much as others and there are tracks which possibly showcase the virtuosity of his playing and singing more. However this song is the one which shouts "classic" in a way other contenders do not quite & it is possibly his most "complete" single in terms of unity of sound & purpose.

Other tracks, such as "Shank", "Focus" or "On The Wrong Side Of The Sunshine" seem to touch emotional nerves more acutely, yet the intensity is equally there in this song, perhaps all the more effective for the clever restraint and underplaying. It creeps insidiously into your psyche rather than battering down the door. It's classic but also classy.

The joys of "Sierra Leone" therefore insinuate themselves into your heart subtly: both lyrically and musically. There have been many, many songs about the impact of love causing one to behave extremely, bordering on irrational impulses, but few of them centre upon relocation issues. If one did somehow land upon such a metaphor for unconditional commitment, you might well imagine a writer choosing some extreme & possibly hostile environment to demonstrate their love (North Korea anyone?) but Levi again chooses subtlety. Sierra Leone is admittedly not the first place any of us might think of emigrating to (and kudos to him for selecting a country rarely mentioned in popular song which ensures that the title alone piques one's interest), yet it's not in itself an unpleasant part of the world & the listener might well imagine the singer & his paramour really having a great life there, rather than suffering for love. One wonders if the country holds personal resonances for Levi.....

The tune is a most interesting one: it is sufficiently lush & attractive to draw us into it, yet closer inspection reveals how unusual it is: an odd tuning with consequently unfamiliar note clusters. The effect is certainly rather non-Eurocentric and evokes African high life guitar playing: totally suitable for the song and a little reminiscent of the sound on his recent single  "My Own Way". It jangles gently and agreeably throughout & sets a scene of bliss.

So there you have it: a wonderful song which offers the more casual listener something to warm the cockles of their heart while also giving the connoisseur much to delight them on closer inspection.

It's back to business nearer usual for Levi Washington with the release of "Same Ole U".
[1 image] END_OF_DOCUMENT_TOKEN_TO_BE_REPLACED

It was grand indeed to catch up with Levi Washington live on Sunday on the Bandstand, but it's back to the weekly business as usual now with his ...
[1 image] END_OF_DOCUMENT_TOKEN_TO_BE_REPLACED

I was pleased to hear that Levi Washington is managing both his health issues & his rapidly expanding portfolio of commitments running live events ...
[1 image] END_OF_DOCUMENT_TOKEN_TO_BE_REPLACED

I'm sure many readers will have been saddened to hear of the illness of Levi Washington last week and his consequent hospitalisation.
[1 image] END_OF_DOCUMENT_TOKEN_TO_BE_REPLACED

You can't fault Levi Washington for ambition: trying to release a new single every week against the background of organising so much live music ...
[1 image] END_OF_DOCUMENT_TOKEN_TO_BE_REPLACED

After the angst of last week when he agonised over the mix of "Carrie, Baby" until Wednesday & the existential angst of the preceding "Check 1, 2" ...
[1 image] END_OF_DOCUMENT_TOKEN_TO_BE_REPLACED