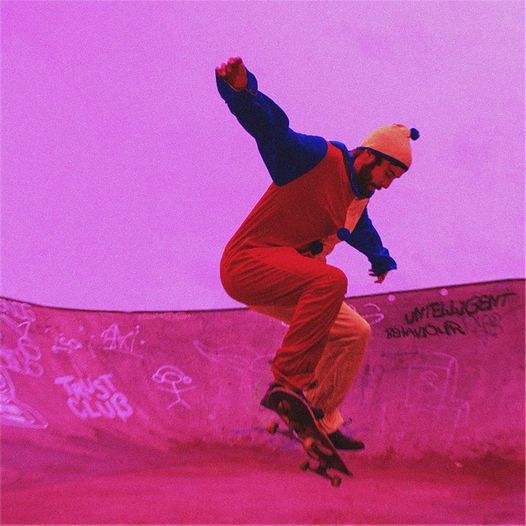 I appreciate that one of the tasks of a reviewer is to maximise the amount of information about an artist so that the reader can investigate their music properly. Generally speaking most of my reviews involve some contact with the artist to facilitate this, but in the case of Trust Club whose new single "Untelligent Behaviour" (whose title certainly resonates in the current times) is out today, I'm afraid I don't know too much beyond what I've gleaned online.

My first awareness of their existence was when they gigged in Leamington with "Hot Music Live Presents" artists (and fellow Rugby based band) Monday Nights back in October: a gig which pre-COVID I'd probably have attended.  I also spotted their name playing with other "Hot Music Live Presents" artists Danny Ansell and Carrick at The Arches in Coventry, so it's a shame I've not seen them yet. Hopefully I shall. Hopefully you will too.

Anyway, they self identify as "Chönky Indie Rock" and "Untelligent Behaviour" certainly provides ample evidence to validate that claim. It's noisy, angled, biting & pretty compelling: all stuff which appeals to me (and hence this article) but probably is even better experienced live. I don't know if bands like Luna Kiss or Dissident Noize Factory are on the band's playlists, but I'd understand it if they were: they display the same capacity to offer melody via quite extreme arrangements. (Credit to Nathan Morris for mixing & mastering to aid this balance).

Although the title (and I like the idiosyncratic spelling) hints at things which drive me a little crazy at the moment, I have no reason to suppose they are necessarily writing about my bugbears. The theme (judging by the visual clues) might relate to skateboarding, but then again they might not.. perhaps the band intend you to apply it as you see fit. As with all good examples of music of this ilk, the lyrics morph in an out of easy intelligibility so they only offer intermittent clues.

Ultimately that doesn't matter too much: it's an attractive & confident offering from  the band (and I wish I could tell you the names of the members but I can't seem to find that out) and for the moment I'll just have to judge them on the single alone: which thankfully has made an instant good impression. I trust it will on you too…