'Mermaid' EP by Paradise of the Titans


'Mermaid' EP by Paradise of the Titans 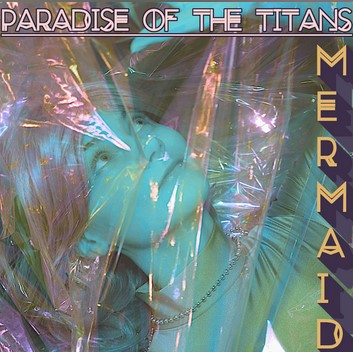 When, about a month ago, I reviewed the inaugural live performance of Ian Todd's excellent new album "Seven Signs of a Soul" at the Tin, I did mention in strong terms how impressed I was by support act Paradise of the Titans.

A large part of what I do in reviewing local music is to introduce myself to great new artists whom I hadn't previously heard so I can not only pass the good news onto you, but revel in their talent myself. Inevitably, it takes a stroke of luck such as catching an artist I'd not heard before supporting one I knew rather better (and over the years this route has introduced me to many subsequent favourites) and under such circumstances I have no compunction about holding my hands up when I come late to a particular musician or band.

In this case, after the gig, I checked out the most recent Paradise of the Titans release, the ‘Mermaid' EP and so enjoyed it that I feel I ought to share it with you, however belatedly it that might turn out to be compared with my intended usual response time: in fact I gather it won't be long before I can tell you about their latest EP which I gather is currently being recorded.

As with my live review, I say "their" when some of the time the band is really a solo act for Alice Weston, the brains and creative talent behind the band name. In fact I had really to check this aspect out with her as I was a little confused, seeing just her onstage yet the online description is as a duo. In fact it's even more complicated than that. I think we can safely put the central core of Paradise of the Titans down as being Alice with her bringing onboard collaborators as appropriate. The EP thus features Sarah Scouller on keyboards & I am advised that for the next release (plus associated live performances), Alice is joined by a drummer and a synth player, making them, for a time at least, a trio.

Regrettably, as far as I'm concerned, reviewing later than others means they use all the best descriptions first and I end up trying to find new angles rather than simply repeat others' articulation. However, when publications as prestigious as LouderThanWar have reviewed a record, that in itself tells you the regard in which it is held: and their assessment is glowing

I know those reading reviews appreciate having some sort of signpost towards what I'm talking about, but as many previous reviews have stated, I do have a penchant for elusive artists who are too slippery (as a true mermaid must be) to pin to a single genre category. When you can't even easily establish the size of the band, such qualities are enhanced.

I guess Alice must have influences (I am fairly happy in spotting some aspects of Kate Bush in her live performance style as I said last time) but musically I can't definitely state what they could be. I honestly don't think it matters: we need to take this very idiosyncratic music purely on its own terms and rejoice yet again that in the current vibrant creative pot which exists in Coventry and Warwickshire music, we have someone wholly unique. That's what really excites me.

You can't easily dissect who Alice & crew create the actual songs, let alone work out precisely what she is trying to tell us: at one level this simply drives us back to repeated listens to try to decode it (no bad thing for a musician) but even so, I think the overall effect is more impressionistic than figurative.

Alice seems to revel in various aspects of the other worldly & transcendental. A lot of her work (including visuals) seems extra-terrestrial in inspiration, yet here she evokes the mysteries & mythos of The Deep (I understand that her next EP will bring in robots). Clearly such beings will not necessarily share our languages nor aesthetics and so it's wholly appropriate that precision of meaning remain elusive. There are a lot of mysteries involved in Alice's work & I think she is challenging us as much to explore them as necessarily solving them.

The title track, which leads the EP off, is a solemn piece which appears to have been transmitted upwards from the sea bed, through the waters & not only emanating from creatures not speaking English, but distorted and mutated by the element it is travelling through (the vocals would appear reversed to achieve this effect in part). It has a dignity and sadness which possibly speaks for aeons of seeing wrecks & loss. The keyboard sounds would seem to be created from vintage machines and although this normally means making a song sound 1980s/90s which can be very distracting in some cases, with Paradise of the Titans you just get them used tastefully to tell the story in hand without at all sounding like an exercise in nostalgia.

Track two, "Rainmaker" is another aquatic themed track, though this time we are out of the ocean & feeling the water from above us. Again the combination of ethereal (I have held off using the term until now but it has to be deployed at some stage in a Paradise of the Titans review) voices and minimalistic keyboard sounds (I assume portraying droplets) have a n exquisite effect: there is sun glinting through the rain, though the latter still serves as a curtain to filter the words between what can be understood & something just out of comprehension.

"Walkman"  makes much more overt the slightly eastern tints I perceived in "Rainmaker": here you get much more obviously oriental instrumental sounds: you can imagine yourself wandering around underneath the cherry trees and if you again can't quite understand what Alice is singing about: how could you expect to if in an exotic land whose language you know little of?

Final track "Boudica" fits the others in terms of emotional landscape: I'm not at all sure where she is on this one (a cave seems a distinct possibility)though water could well be involved again, nor what the title means in the context of the song: which brings us neatly round to my central point: it doesn't matter. With Paradise of the Titans I don't want to have a perfect, objective "understanding" of the songs: but I do much appreciate being led on a journey a little out of my comfort zone and experience on which I am invited to figure things out for myself & to draw my own conclusions.

As I say, a unique voice, a unique talent & one I'm delighted to have serendipitously encountered. I look forwards to sharing the new EP with you as soon as it's out.