King of the Alps live 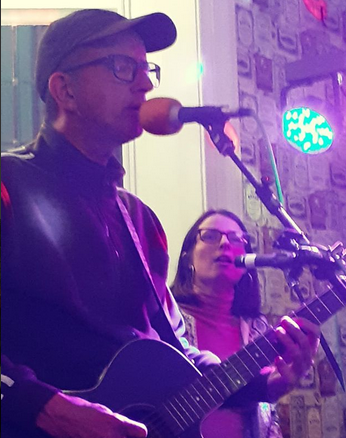 Last night was another little milestone for me: my first pub-based gig for two years. As you might imagine, it took an exceptional act to tempt me, and in this case it was King of the Alps whose great new single "Time Goes So Slow" I reviewed five days ago. It was also my first chance to see Paul Ingram & Simon Ward play live with new group member Sally Laws & the gig totally lived up to my high expectations.

Performing within the context of Rich Keogh's open mic at The Avenue in Leamington (currently named "Fifteen"), the band were on excellent form. They don't play live too often, but I suppose this rarity simply adds an extra veneer of value for aficionados.

Sally's addition to the lineup has one of those "this was meant to be" qualities. Paul tells me that in fact much of his writing has had a sense of creating opportunities for him to harmonise with a female voice & in the past both Izzie Derry & Ellie Gowers have added vocals on recordings (which tells you something about the esteem the band are held in), though obviously neither can easily perform live with the band (though check out my live review from July 2019 when Izzie was able to join them for "Helter Skelter"). Now Sally is able to perform those parts on a regular basis as well as adding her own original vocal take on current songs, not least "Time Goes So Slow". In fact, although we've been waiting for the new King of the Alps album ‘Heart of the Matter' for ages and despite that collection being considered near completion some time ago, Paul also advises that such is Sally's impact on the group that they are revisiting the recordings so as to maximise her contributions & enhance what they already had: so that will be an extra treat to look forwards to.

Unsurprisingly, the current single was in the set, and worked well, despite, as I mentioned a few days ago, their lineup being unable to reproduce all the layers of recorded instrumentation live especially keyboards and drums (it's ironic especially about the latter since Paul still sees himself as primarily a drummer). However I'm told that they have a plan to resolve this, the details of which will be resolved in due course. In the meantime, as I suspected, "Time Goes So Slow" works very well in stripped back form. Proud as the band are of their detailed recorded arrangements, I still think that the strength of the beautiful trademark melodies (and it's worth emphasising here the considerable contribution Simon's bass playing makes to the melodic complexity as well as that instrument's more conventional roles) come through even more strongly in the simpler live arrangements. I think each set offers different yet complementary perspectives on the song.

In a necessarily short set, as I say we got "Time Goes So Slow", plus the tracks "Beauty of the Rain" and "Helter Skelter" where we have already heard female vocals  on record but for me the revelation was "Wonderful Day": a single from June this year & destined for the new album. I gather the band were a little apprehensive of how this would work live (if you know the song, you'll appreciate how central the drum part is to the arrangement) but it was a triumph: Sally's vocals here took an already outstanding song & elevated it still further. I can well imagine that they will want very much to incorporate these into the album version of the song.

The band seem very excited about where they are going & so am I: there is a definite sense of kicking into still higher a gear & producing yet more exquisite music. Look out for the new album but also for some more live dates which they are currently working on for the last part of 2021.

Regular readers will need no reminding of my admiration for that subtle and highly original band King of the Alps.
[1 image] END_OF_DOCUMENT_TOKEN_TO_BE_REPLACED

In one of those interesting serendipities which real life offers us occasionally, not twenty four hours after reviewing the debut solo single by King ...
[1 image] END_OF_DOCUMENT_TOKEN_TO_BE_REPLACED

It was only yesterday when Facebook reminded me that it was exactly twelve months since I had last see King of the Alps play live.
[1 image] END_OF_DOCUMENT_TOKEN_TO_BE_REPLACED

Every so often, I enthuse in a review for "Hot Music Live" over the privileges of being able to do so: fairly obviously hearing wonderful & original ...
[2 images] END_OF_DOCUMENT_TOKEN_TO_BE_REPLACED

This is something of a record for me (pun intended): I am reviewing an EP which I have been enjoying for over four months & now it is on the brink of ...
[2 images] END_OF_DOCUMENT_TOKEN_TO_BE_REPLACED