"World Falling Down" by Satsangi 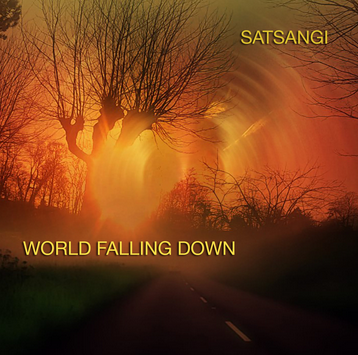 Fresh out from Satsangi is "World Falling Down", (their first since they raided their own vaults for the "Don't Want Anything But More" single back in January) the title track from their collaborative cross media project which includes music, film and poetry. This in turn is a significant element in the Coventry Dresden Friendship Festival, an initiative which strikes hard into the heart of this writer due to his family history. Within this framework, they are collaborating with fellow "Hot Music Live Presents" artist Shanade at the British end, and through the wonders of technology, Dresden band Søjus1.

While "World Falling Down" is the first release of the project, you may have already heard "The Storm in My Eyes" on BBC Coventry & Warwickshire on Thursday, played by Letitia George (sitting in for Brody Swain). This track features Shanade & Johnny Satsangi talked a little about the project on this occasion. There was also a launch event at the Litten Tree in Coventry yesterday.

â€‹And so naturally (if a little belatedly) to the song itself. Two of the many things Satsangi do so well are on display here. Firstly, they kind of specialise in epic, doom filled mood pieces which build swiftly to magnificent heights. Secondly, their DNA has always been around thinking outside Little England: they probably have very discernible indie roots still in their sound, but from the start this has at best been a framework to build meta cultural pieces upon. These (to date) have mainly been Indian in form, but as a band whose most spectacular overseas tour so far was to Africa, it might be wiser to see this influence more as an understandable starting point for exploration, being one they knew best, rather than an exclusive focus. "World Falling Down" therefore seems to include influences from beyond these shores: is it too fanciful to catch glimpses of Wagnerian grandeur in there? Am I imagining tasting flavours more of Mitteleuropa than Warwickshire? I'd like to think so.

As most readers will know, the Coventry/Dresden link derives mainly from a shared history of destruction from the air. For Coventrians, the date of 14th November 1940 is unlikely to be easily forgotten, for the inhabitants of Dresden, the 13th, 14th & 15th February 1945 have similar resonance as "Florence on the Elbe" was destroyed. I really don't know if the song is intended to evoke these experiences or not, but to my ears to certainly manages that feat.

The theme of the song apparently is "It's a dark time to go out in the cold, so hold on tight!" but interestingly, despite a possible temptation to go full on apocalyptic mode, if anything, Su's voice (more than capable of bringing the apocalypse down upon us as necessary) tends towards the compassionate, and I doubt if this is accidental.  It heads in the direction of Sturm und Drang yet retains a definite humanity to the end. It may well be as much about healing after disaster as the disaster itself.

You can also catch another aspect of the project, Paul Windridge's video of the song, via this link:

I reviewed (back in November) the most recent single from Satsangi, "World Falling Down" and mentioned a little bit at that time about their ...
[1 image] END_OF_DOCUMENT_TOKEN_TO_BE_REPLACED

During these turgid times when there is a distinct danger of every successive day seeming like its predecessor, it's helpful to be surprised now ...
[1 image] END_OF_DOCUMENT_TOKEN_TO_BE_REPLACED

Satsangi, never a band to shirk a challenge nor to be meekly led by fate nor wander aimlessly down roads many others have trodden previously, seem to ...
[1 image] END_OF_DOCUMENT_TOKEN_TO_BE_REPLACED

Well life under lockdown continues to evolve doesn't it: even, or perhaps especially, our musical life.
[1 image] END_OF_DOCUMENT_TOKEN_TO_BE_REPLACED

Some excellent news for lovers of music which dares to be a bit different.
[1 image] END_OF_DOCUMENT_TOKEN_TO_BE_REPLACED

I have often written about the wonderful, in fact the weird, thought provoking & wonderful evenings Johnny Satsangi puts on at the Zephyr Lounge ...
[1 image] END_OF_DOCUMENT_TOKEN_TO_BE_REPLACED