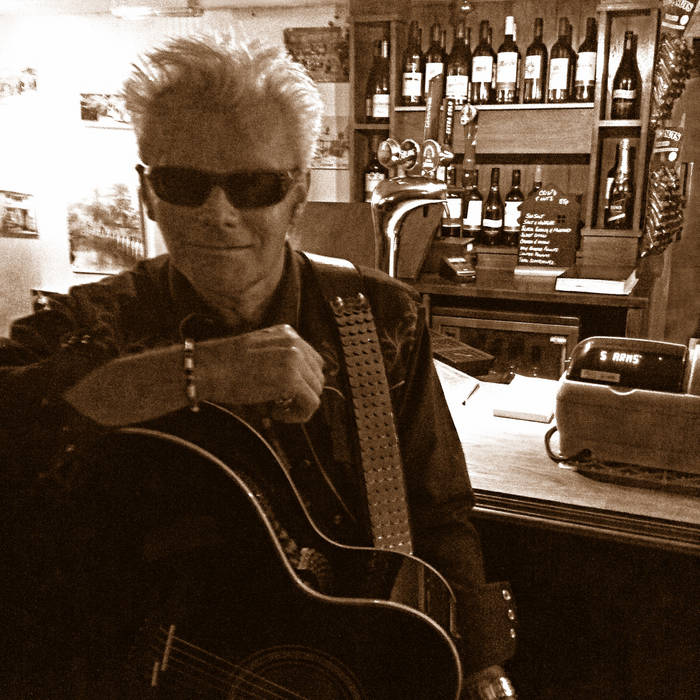 I got pretty excited in these pages recently as Dave Pepper turned the clock right back on his sound with that excellent song "I Need More Time": which I hope you managed to check out. It certainly gained Dave a lot of attention and many online plays. Dave is a self confessed musical (and actual) nomad, so following his musical career has always involved regular adjustments from his fans as he has made often quite startling changes of style over the years. Like David Bowie, you can understand why not every one in his audience can have handled every transition with equanimity, which possibly accounts for such a positive response to a return to roughly how he sounded when many of us came into his story.

The other thing of course about "I Need More Time" was its subject matter: coming to terms (or rather attempting to come to terms) with the loss of his mother: a moving theme & one which would resonate with so many in his fanbase. You can't follow a song like that easily & it's probably futile to try to match it, so wisely Dave has switched theme quite dramatically with his new single, "Rub Rub Grind".

Some songs have ambiguous titles but this one pretty much tells you what to expect: let's say it's "adult themed" and the lyrics expand upon the title… It's a fun track and despite what seems on first play a quite simple hard rock track, there is a lot going on in there to enjoy.

The title seems to have some sort of Prince Buster/ska reference, despite the rock sound & I really loved how Dave adopted a vocal sound I've not really heard from him before: a sort of deadpan baritone which kind of reminded me of Bid from the Monochrome Set and there are some parallels with that great band's 1979 single "The Mating Game" (a song introduced by its composer on stage as "disgusting"). It's this method of delivery which raises the song considerably: although as freshly married man, the sentiments in the song no doubt are true, his tongue is at least some way into his cheek & I think there is a slight element of parody going on of some of the less humorous rock songs of the late 1970s/80s: as I say, a fun song.

The actual sound, if you fancy any sort of comparison on my part to earlier stops on his career, is reminiscent of late X-Certs/Ramrods/Major 5: harder rock with a punk energy (and it's worth remembering that in the Ramrods (later Major 5) Dave worked with Culture Club, the Pogues and Rick Buckler from The Jam).

There is a truckload of energy, passion, humour & lasciviousness on "Rub Rub Grind" which I defy anyone not to enjoy.

You can hear it via this link: https://davepepper1.bandcamp.com/track/rub-rub-grind

and as far as this writer is concerned, he can stay in this current mode as long as he likes….

Following the raunch of his most recent release from earlier in the month, "Rub Rub Grind", Dave Pepper is back with his new single "Don't Stop.
[1 image] END_OF_DOCUMENT_TOKEN_TO_BE_REPLACED

Out today from Dave Pepper is a new song called "I Need More Time" .
[1 image] END_OF_DOCUMENT_TOKEN_TO_BE_REPLACED

The latest release from Dave Pepper is called "The Calm" and is now available for you too to enjoy via this link: https://davepepper1.
[1 image] END_OF_DOCUMENT_TOKEN_TO_BE_REPLACED

As usual, starting a Dave Pepper review with a list of his musical projects & genres mastered would in itself make an article too long to hold your ...
[1 image] END_OF_DOCUMENT_TOKEN_TO_BE_REPLACED

Given the overwhelming feeling of claustrophobia engendered by the current situation, it is a corrective to share evidence that we are not all hemmed ...
[1 image] END_OF_DOCUMENT_TOKEN_TO_BE_REPLACED

In terms of the tracks on ‘Hot Music Live Presents Volume One', some were great tracks from today & others rare & unreleased gems from some of ...
[1 image] END_OF_DOCUMENT_TOKEN_TO_BE_REPLACED