"Wes Finch: A Life in Music" by Russell Whitehead 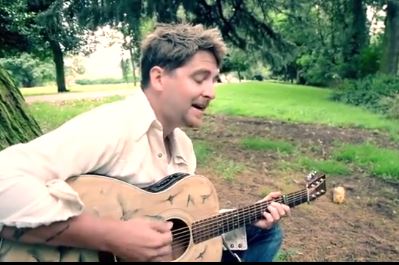 If you are an admirer of the visual artistry of Russell Whitehead or the musical artistry of Wes Finch, or indeed of both as I am, then I'm sure you'll be delighted by the release of the "Wes Finch: A Life In Music" film by the former.

Originally begun several months ago, Russell has brought his customary skill & taste to editing it into a work of art in its own right. If you are a Wes fan (why on earth would you not be?) then this is an illuminating set of insights into his career but also his creative processes & philosophies, set against examples of his work. For those interested in the wider aspects of what it means to be a musician in these times, especially one who is more focused on the craft and art of creating & performing music than "being in Bon Jovi", yet still needs to earn a living, then the film should be equally fascinating.

Based around a candid and articulate interview wherein Russell probes deep into Wes to extract the insights at the heart of the film, he manages to keep the approach fresh & contextualised through cuts to other footage (including performance) which he had shot of Wes and his associates over a period of about nine years, without breaking the thread of the core discussion. Overall, the film is as visually attractive as you'd expect from Russell.

Interestingly, he also mainly removes himself from the finished film, substituting his oral questions with captions so that the totality of the piece is about Wes & it is his voice we hear.

What is also very interesting is the tone of the whole film is very positive (there is laughter in the mix): this is all about a musician who has been plying his craft for long enough to become cynical under the challenges of the economics of trying to be an independent artist & the film was shot during a period when not only were things especially difficult for musicians but they'd been bad for twelve months with no clear route back towards even the status ante quo. Nevertheless Wes comes across as still enjoying what he does and very open to reflect upon where he has been & where he is going next.

It's a good blend of philosophy & finer practical details which could directly inspire artists to consider what he is doing and thinking himself: at the very least is a sense of "you are not alone" in such a world.

Having whetted your appetite (I hope), here's where you need to go to see & hear it:

I'm sorry to say that I'd never previously attended one of the summer Sunday afternoon concerts on the Bandstand in Stratford before but ...
[7 images] END_OF_DOCUMENT_TOKEN_TO_BE_REPLACED

Very slightly more than twelve months ago I reported to you on Wes Finch's Leap Year gig: a special event to mark the four yearly occasion & to ...
[1 image] END_OF_DOCUMENT_TOKEN_TO_BE_REPLACED

Somewhat to my surprise, yesterday afternoon I found myself enjoying live music in the actual physical presence of the musicians creating it for the ...
[2 images] END_OF_DOCUMENT_TOKEN_TO_BE_REPLACED

There is some good news for Wes Finch fans awaiting the release of his Leap Year gig live album (as (p)reviewed in this magazine last month) He has ...
[1 image] END_OF_DOCUMENT_TOKEN_TO_BE_REPLACED

Some six months ago, I wrote what to date is my penultimate live review for the magazine: concerning Wes Finch's Leap Year gig.
[1 image] END_OF_DOCUMENT_TOKEN_TO_BE_REPLACED