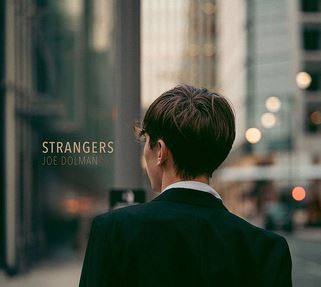 Out today from Joe Dolman is his latest single which rejoices in the title of "Strangers", the follow up to the successful "Real World" which itself has been out for less than a month.

It's interesting that after quite a long period of quiet from Joe, he's brought out two tracks almost back to back: I'd guess that after a lengthy period of not being able to record, he may well have had a burst of sessions laying down several songs he'd written in the interim. He probably also has a certain keenness to share the proceeds of his creativity during the pandemic and understandably wish to respark his career momentum to the level of before COVID19 struck: all totally understandable reactions which go to explain the slightly unexpected swiftness of the single while people still appear to be gaining pleasure from (and giving airplay to) its predecessor.

I said "rejoice" and that's possibly not the best word to describe "Strangers", whose title alone slightly signals its theme. It's another in the growing line of Joe Dolman songs which I have previously used terms such as "melancholic" and "fragile" about, and once again the mood is regretful. He does this sort of thing really well and if, at this stage of his career it's felt that it's helpful to establish a performing persona and trademark style, then that makes a lot of sense. To be honest, I think he nailed it quite some time ago and if now he's consolidating ready for another jump forwards, then I wish him all the best.

Originally, I felt for him: he seemed to be singing of sadnesses in his life & loves. As the sequence proceeds though, and with no evidence that his songs do actually reflect his own current position nor state of mind, I personally have come to the conclusion that he is (for the most part at least) writing in character and presumably based on observations of others. Which are fine approaches for a songwriter and he clearly has honed his abilities in those particular directions. What I personally would like to hear from him though would be a complement to such narratives, maybe a celebration of successful relationships and joy in them?

As I have said before, beyond that personal perspective, I find it hard these days to critique an artist like Joe. "Strangers" is as beautifully crafted in terms of composition, performance and production as you'd expect. He has assembled a great team around him to help him realise his work: musicians, production team and visuals. In relation to the music specifically, this allows his voice to be supported but not overwhelmed by the arrangement (and it does need saying that although lyrically the song does possess those elements of melancholy and fragility, they are set in a more upbeat musical framework which certainly offers a good contrast with "Real World" sonically, but which if it had been handled with less finesse by those playing and producing it, might have distracted from Joe's central performance).

It's a very well wrought single (not that you needed me to tell you that I'm sure) and will without a doubt add another layer of lustre to his burgeoning reputation.

In terms of catching Joe live, as I mentioned last time, his December 17th gig at All Saints church in Leamington (rescheduled from last year), has tickets available via http://infinitymusicgroup.bigcartel.com/

Joe also has headline gigs lined up for The Grace in London on February 10th & the following evening at Night & Day in Manchester: check his page for ticketing details.

I honestly can't say that I was too surprised by the release today of an acoustic companion  EP to Joe Dolman's most recent ...
[1 image] END_OF_DOCUMENT_TOKEN_TO_BE_REPLACED

It's that moment for Joe Dolman which fortunately comes to some creative artists on a roll when you've last released a single as good as ...
[2 images] END_OF_DOCUMENT_TOKEN_TO_BE_REPLACED

It's been above a year since I last got to review a Joe Dolman release (his collaboration with Millie Tilby "Let's Go Home") so it's ...
[1 image] END_OF_DOCUMENT_TOKEN_TO_BE_REPLACED

This is rather an unusual release to be reporting on.
[1 image] END_OF_DOCUMENT_TOKEN_TO_BE_REPLACED

I have recently accused Joe Dolman of being prolific in his output and here he is again with a brand new release a month since I last reviewed him.
[1 image] END_OF_DOCUMENT_TOKEN_TO_BE_REPLACED

I think that we can all by now agree that Joe Dolman is one of the most talented & popular artists from Coventry & Warwickshire & to that add "one of ...
[1 image] END_OF_DOCUMENT_TOKEN_TO_BE_REPLACED