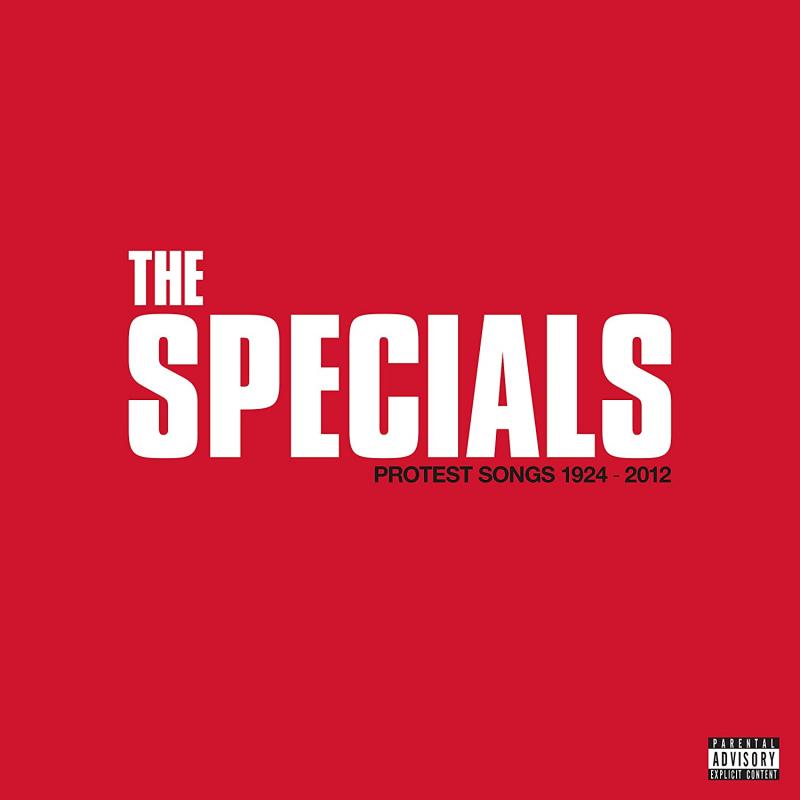 Fresh out from The Specials is a new album called ‘Protest Songs 1924-2012'.  It was conceived impulsively and in reaction to their frustration at not being able to work together as they wished (they had convened in February 2020 to begin planning a new album and within a week members had started falling victim to COVID19). They took into account the general "paranoia and mass unrest" and then the specific protests sparked by the George Floyd murder and decided to respond to what they saw & felt around them with an "interim project, for our sanity as much as anything else" (I get the distinct feeling that it was cathartic for them in working out their contemporary feelings) and so was born the project of covering protest songs of the last century.

Despite the colossal weight of evidence of forty years, (too) many people feel happiest labelling the band as a "ska band". In fact even the briefest glance at their work would tell you that they moved away from this immediately after their first album (in the words of Jerry Dammers: "ska was just a launching point. I didn't want us to end up like Bad Manners"). Certainly the band has returned to ska sporadically in that period (there's a bit on ‘Encore', their previous release). However if you want a more accurate description of the band since its inception, then "protest band" fits much better. Maybe this was always what they needed to do (despite all the great original protest songs they have written: again not least on ‘Encore').

The second point I'd like to make about the album in general is to hark back to how educational bands like this one have always been to the likes of me: we'd discover new artists through our favourite artists covering them, talking about them or especially playing them over the PA before & during gigs (quite apart from The Specials in this respect, I learned so much from people like the Clash and Elvis Costello, perhaps not uncoincidentally both early collaborators with the Specials).

Quite a lot (around 50) of protest songs were considered, but the dozen which emerged from the process of selection have tended to avoid the best known: quite possibly only The Wailers' "Get Up, Stand Up" will be immediately familiar. Of the others, some with a blast of instant hindsight make obvious connections: the Staple Singers, or Big Bill Broonzy for example (and it's great to hear the band tackle the blues: a form bassist Horace Panter is so well known for playing in outside the group). Others are, as I said, pure education. We all know "Wild Thing" & you may know it was written by Chip Taylor. Like me though, you probably didn't have any inkling of his 2012 track "Fuck All the Perfect People". We also get two songs written by Malvina Reynolds (who wrote the well known folk song "Little Boxes") plus contributions from both Leonard Cohen and the Mothers of Invention. To me, most intriguing was a radical reworking of the 1980 Talking Heads track "Listening Wind": certainly not what I'd  have thought of as a protest song until this recording revealed it to me. It's also of course linked through the person of David Byrne to the superb 1983 Fun Boy Three album ‘Waiting' on which he acted as producer. (A second FB3 connection is a live (from the 2019 Coventry Cathedral gigs) version of "The Lunatics (Have Taken Over The Asylum)" which concludes the album, along with one of "We Sell Hope", both also on ‘Encore' and which fit really well into the album's overall theme).

This is no ska album & frankly the band sound liberated from that weight of expectation.  If the Wailers song (sung with characteristic passion by Lynval Golding) and the reggae-ish arrangement on the Talking Heads song (hats off to guest vocalist Hannah Hu) head in that direction very slightly, then it's because in both cases it's the right sound to convey the messages. Otherwise, we get many chances for the excellent musicians to flex their skills and interests in service of the songs. There are moments of barely constrained anger and others of deep beauty and pathos.

Over the years Terry Hall's voice has developed (no doubt the very many genres he has now sung in have helped along with physical processes) and he is in his element here. I'm not sure any rendition of a Leonard Cohen song would have worked this well back in 1980. If the petulant punk style he brought with him from Squad in 1978 has long since gone, then the sense of disillusion has not: all his accumulated experience since then seems only to have informed it more. I'm delighted to see that the band's mission statement for the album is "Still Pissed Off".

This really brings us back to where I started: this is a band who look at the world and tell it like it is: however uncomfortable that might be. The option of taking the easy route and pandering to expectations is one they have never taken. Every step they have taken challenged such things and they are still doing it.  It's with something of a sigh of weariness that I ploughed through the perhaps inevitable online posts from alleged Specials fans along the lines of "I've bought every Specials record but I ain't buying this one" (note this sort of thing appeared in depressingly significant numbers before the album had been played in public let alone released). A sort of 2021 version of the "love the music, hate the politics" nonsense of forty years ago from racists who thought they were fans of the band. If after all this time, you don't get what they are about, it's a little sad. There has even been a  precedent for this album back in 1980 when they confused some people by covering Bob Dylan's "Maggie's Farm" as a b-side to the "Do Nothing" single For me, covers album though it is, it does sum them up nicely.

It must be galling not to be properly understood (even a very complimentary Sunday Times review thought that ‘Encore' was called ‘Reward': not many marks for paying attention there) despite the clarity with which they express themselves. ‘Protest Songs 1924-2012' could not be clearer as to where the band stand and frankly if you don't stand with them on these issues then you are probably part of a problem. You even get their philosophy served up in the form of great music & I'll finish by emphasising that despite the depth of the feelings expressed, the band display optimism: not only is "We Sell Hope" a good point to end on, but even the most powerful of numbers include the uplifting: not least the Staples' opener (and single) "Freedom Highway" or the defiant Wailers song which makes it clear that success in the struggle is not only wished for but anticipated. Interim it may be, but stopgap it certainly is not.

In my recent review of the "Women Pioneers" event at Coventry Cathedral, I drew your attention to its companion event centring on the 2 Tone ...
[7 images] END_OF_DOCUMENT_TOKEN_TO_BE_REPLACED

Just to remind you that if you have not yet visited Coventry Music Museum's amazing & extremely popular temporary exhibition, "On Bass, Sir ...
[1 image] END_OF_DOCUMENT_TOKEN_TO_BE_REPLACED