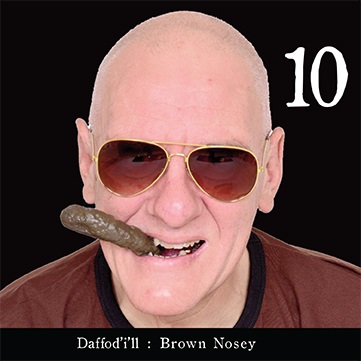 I mentioned as a supplementary note in my review of Saturday's gig at The Tin that I encountered ‘Hot Music Live Presents' artist Daffod'i'll in the audience and he briefed me on his upcoming new album  (his tenth solo one) called ‘Brown Nosey'. He has since then kindly sent me a copy so that I can pass onto you the details.

Consisting of ten tracks (to match its place in the sequence?) which are titled "Blow", "Deborah", "Heart of Stone", "Loverman", "How Do", "No More War", "Nothing Gonna Stop", "Round & Down", "Morning After" and "Yes/No", the album follows ‘I Stripped Bare' which I told you about as recently as last month (he is certainly on a prolific streak at the moment: certainly making up for the many years he was not releasing material).

I suggested on that occasion ".., ‘I Stripped Bare' may represent Dill really coming into his own as a solo artist, mastering the musical as well as lyrical side of his craft and distinguishing his output from that of his two bands, each of which casts quite a shadow.."

Listening to ‘Brown Nosey' tends to reinforce and confirm that impression. Not only does he seem now in his element as a solo musician, building on his much respected legacy but not constrained by it, but he has for the last couple of albums been working with a new production team & this has definitely made a difference I think: they seem to be taking his current work as they find it rather than harking back to previous preconceptions as to what Daffod'i'll music should sound like.

The changes, which have come via evolution rather than revolution (remember that he was not originally an instrumentalist and so his solo career has involved a very steep and fundamental learning curve), are several and subtle rather than paradigm shifting. For example, although the punning humour is still present, the track titles are much punchier without that aspect necessarily infusing them. As with its predecessor, the overall sound is much more contemporary , with that slight leaning towards R&B I detected before, though with a high number of disparate styles informing the various tracks: eastern ones, reggae, high life etc plus once again a greater number of instrumental sounds. This gives the whole collection a pleasing variety without being so eclectic as to be a bewildering mixbag of styles which confuse the listener. They are held together by the continuity of the vocals and work well together as a set. What however is a significant departure is that although spiritual and humane themes crop up throughout the album, there are no tracks with quite the overt religious theme on ‘Brown Nosey' as have been on his earlier ones (even ‘I Stripped Bare' had "Prophet Jesus Christ"). Possibly in line with other changes I've noted, this vital element of his musical & personal identity is being woven more deeply into the fabric of his work & so no longer has to sit on the surface as much….

During our conversation on Saturday, I reiterated to him my liking for the deep dub approach he has deployed to good effect ever since the earliest Gods Toys days (such as  "Arty Natty") and which have cropped up sporadically ever since. He's rarely if ever had more than one on any album (I'm sure he sees the form as merely one of his many musical interests rather than a style to concentrate upon) but I did my best to persuade him to compile them all onto a dub album at some stage. Interestingly, these last two albums where he has really hit his stride don't feature tracks of that nature as such, though reggae influences can be heard in tracks such as "Deborah" (one of the strongest tracks this time round, a bit T Rex channelling I'd imagine & one which would make a decent pick for a single) or "Loverman": another one which I think will attract listeners' attention first.

That said, although certain songs may be the first to make an impression, the overall quality of the writing is an admirably high & consistent level: possibly more so than some of his earlier solo albums where certain ones did stand out much more. It's not an easy trick to pull off:  I've been mentioning in this magazine and chatting to quite a few people about the interesting re-emergence of the EP format in recent years. It certainly offers certain advantages for production but also for promotion and for ensuring that every track gets attention or even airplay. To this extent, Daffod'i'll is probably still a bit old school and maybe he ought to be considering at this point more singles and EPs, but if you can pull off ten track albums of this consistency, then you are doing a pretty impressive job.

Today sees chapter 34 in Daffod'i'll's solo album series with the release of ‘SAY AHHH!' with its tracks being "Conquer All", ...
[1 image] END_OF_DOCUMENT_TOKEN_TO_BE_REPLACED

Eight days after my last Daffod'i'll review, here he is back with another album (just the one this time, although he apparently has another ...
[1 image] END_OF_DOCUMENT_TOKEN_TO_BE_REPLACED

In the four days since I reported on the release of the  last four Daffod'i'll albums, he's back with yet another four today.
[4 images] END_OF_DOCUMENT_TOKEN_TO_BE_REPLACED

After releasing three more albums about as many weeks ago, Daffod'i'll  is back with three more plus another compilation ('The Best ...
[4 images] END_OF_DOCUMENT_TOKEN_TO_BE_REPLACED

After last week's release of no fewer than four new albums, this week Daffod'i'll is back with just one album: his twenty third, ...
[1 image] END_OF_DOCUMENT_TOKEN_TO_BE_REPLACED