The Catenary Wires, Pete Astor, The Pristines and The Sunbathers


The Catenary Wires, Pete Astor, The Pristines and The Sunbathers 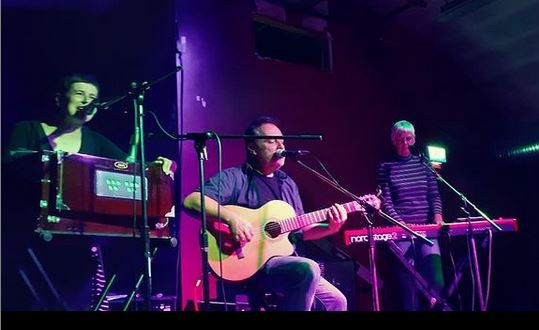 The other day, while reviewing the new Chessi O'Dowd single, "The Pines", I commented that the first gig I had scheduled which was cancelled by the pandemic was her ‘Wine Glass Filter' EP (as it then was) launch. Fortunately, that now looks back on, enhanced into a full album. The second one to bite the dust was a night co-promoted by Julie Robinson of "Hot Music Live Presents" artists The Sunbathers, featuring her band, fellow HMLP group The Pristines and headlined by Pete Astor & the Catenary Wires. I was delighted that thanks to the tenacity of all concerned, that gig actually went ahead with all the originally planned acts last night: a full sixteen months later than intended. As a poignant sign of the paucity of recent live music, I noticed that the "upcoming gigs" board at The Tin (for that was the venue) still featured the original date plus the March 2020 Izzie Derry EP launch which was the last performance I attended for a long time.

It was a really uplifting evening for which I thank all concerned (who all seemed to be enjoying playing live again) and the venue who had created a safe environment where I certainly felt as safe and as at ease as was possible given the times.

Four acts over one evening is splendid value for money (I can only think of Johnny Satsangi's APE nights as a recent local rival) but naturally it meant that the earlier acts had less stage time, including Julie's own band. Their short & sweet set simply left me hungry for more & I yearn for a full Sunbathers set asap. (I have put this to them I assure you). Their beautiful songs of the sun, seaside and innocent pleasures struck a definite chord, especially in the context of our recent experiences & were well timed for the ending of another summer. They even debuted a new song, probably their darkest ever, if you can conceive of that. Many thanks to Paul & Julie too for including "Freiston Shore" from ‘Hot Music Live Presents Volume Six' and their consequent shout out to the project & dedication to me. It was much appreciated.

What can one say about The Pristines which hasn't been said before? I had very little idea beforehand as to what material they might be playing, such is the range and depth of their canon over the last quarter century & so evolving their live lineup. I was far from let down by the ones they selected for the evening (the highlight possibly being an incredible version of "Sea Horse") which plunged back into their catalogue. They are one of those (local) bands who though with a substantial loyal following (who turned out well last evening) by those in the know yet it disappoints me that they are not more widely known. Their power (as a trio this time) is exceptional, matched only by their commitment. Their performance put any number of more turgid, genre-chasing rock bands with bigger current profiles to shame & as I listened to them, I thought about how much of the vocabulary of independent rock music was created by them without adequate acknowledgement. Not only was it one of the best performances of artists of this nature I've heard in a long time, the drumming alone was the most powerful & original I'm likely to hear in 2021. Jon was also telling me beforehand of his plans for recording new Pristines material which is something for us to look forwards to.

Pete Astor (formerly of The Loft & The Weather Prophets etc) was something of an unknown to me before the gig. I found it amusing that from the off, a year or more ago, my initial interest in the gig was definitely the support acts & I should have turned out just for them. The two headline acts (and this was part of a joint tour they have been making together) were absolutely very high quality icing on an already delicious cake: not least because I wasn't originally  aware of what their current acts might sound like. In the vent, I was instantly converted into a Pete Astor fan. Playing with the Catenary Wires' rhythm section, Andy Lewis (on bass: you may know him from Paul Weller's band) and Ian Button on drums (formerly of Thrashing Doves & Death in Vegas), this was a joyous and articulate pop set (the between songs stories added a great deal to the bonhomie). Songs touched with grace and skill upon a surprising range of topics from the sublime to the specific, such as his love of model villages. He even had a cover of Generation X's ode to self pleasure "Dancing With Myself" which took me by pleasurable surprise. As with anyone of this skill in writing, I kept on hearing little hints of others (bit of Bowie here, a little Wreckless Eric, or James or the Only Ones) without any song sounding derivative. No wonder he might be credited with setting the tone for Creation Records from their outset.

The final act were the Catenary Wires & once again I was really pleased to be confounded. I was of course a fan of Talulah Gosh (let's face it, you'd have to have a heart of granite not to be), the original band of vocalist/harmonium player Amelia Fletcher & guitarist Rob Pursey, but I appreciated that they'd moved on since & wasn't expecting anything in that vein (though I was taken with the ‘Talulah Gosh Airlines' bag they had obviously clung onto for use in transporting cables etc). In fact I understood that their latest band was essentially an acoustic duo. However a little research revealed that in recent times they have added the aforementioned Andy & Ian as well as keyboardist Fay Hallam (from Makin' Time) so not only do they have a much fuller sound than I originally thought, there were complex vocal arrangements involving them all. Rob still favours an acoustic guitar & several songs showed their (presumable) origin via attractive licks and runs on it. However the more complicated vocals, the fluid rhythm and the many keyboard textures (which worked well with the harmonium) gave us something which certainly wasn't Talulah Gosh revisited, but was uplifting & just right for what I think everyone in the audience needed (there was some spectacular dancing from some which I probably hadn't anticipated). There were several moments of sublimity and transcendance  (Amelia's voice is one definite constant between the bands, and I was pleased how great it was considering her between songs talking betrayed a croaky voice). They have a new album ‘Birling Gap' whose tracks greatly informed the set & which is well worth a listen (I was amused to learn that the cover, featuring a photo of the eponymous cliffs was only intended as a developmental shot: the intention to return and shoot the band in the location was thwarted by COVID19 so what you get is just the scenery).

It was an interesting combination of acts & greatly to the credit of the promoters ("La Rocade": which is Julie, Kitchen Club and Just Dropped In) to put them all together: they complemented each other well without necessarily sounding alike. I really hope that they can conjure up more nights like this & I certainly have become a fan of two acts I knew insufficient about before, which I wouldn't have been able to do so without this opportunity, and judging by the overall audience reaction (and it was great to see 'Hot Music Live Presents' artist Daffod'i'll amongst them and catch up with his latest projects), I was far from alone in feeling like that. Thank you.

Much as I get a huge amount of pleasure writing about our current vibrant & diverse local scene, I get a special thrill when one of my favourite ...
[1 image] END_OF_DOCUMENT_TOKEN_TO_BE_REPLACED

Very many thanks to Michelle Bailey-Le Long for an in depth heads-up about this weekend's Boudica Festival treats at the Tin Music & ArtsYou may ...
[1 image] END_OF_DOCUMENT_TOKEN_TO_BE_REPLACED