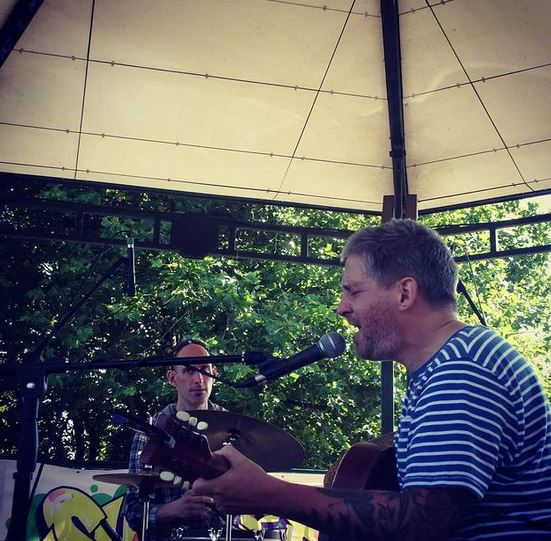 I'm sorry to say that I'd never previously attended one of the summer Sunday afternoon concerts on the Bandstand in Stratford before but I'm glad that I managed to yesterday: perfect weather, a most beautiful setting, the space to distance safely & above all music to match the environment: Wes Finch accompanied by Ben Haines on drums.

I'd not seen either of them play live for eleven months (since their Kenilworth Arts Festival gig outdoors with Jools Street in the lineup that afternoon, during that brief & slight ease in circumstances) and I'm not that sure how much either of them have played live since: it could have been their first since then, but it was worth the wait.

The crowd (it was busy as you might imagine) which also drew HotMusicAl of this magazine, were entertained & indeed moved by the set which included some of my favourites of his more recent output such as "I've Got Your Back" and his Silver Wye song "The Getting Place" plus older crowd pleasers such as "Southern Cross" as well as, for the less initiated classy covers of material originally by the likes of Hank Williams, Bruce Springsteen and Fleetwood Mac: not that any of the "play something we know" brigade were in evidence.

As ever, one of the delights of bandstand gigs was seeing very small children, probably accidentally experiencing their first gigs while out in the park, approaching the stage in wonder and dancing. Let's hope it instils lifelong loves of live music.

These gigs are I believe curated & organised by the team at Stratford Playhouse so hats off to them.  I understand that Shanade is due to play on September 5th and were it not for the Godiva Festival now taking place at the same time, that's one I'd like to see. In any event, I look forward to seeing more of these gigs in years to come.

If you are an admirer of the visual artistry of Russell Whitehead or the musical artistry of Wes Finch, or indeed of both as I am, then I'm sure ...
[1 image] END_OF_DOCUMENT_TOKEN_TO_BE_REPLACED

Very slightly more than twelve months ago I reported to you on Wes Finch's Leap Year gig: a special event to mark the four yearly occasion & to ...
[1 image] END_OF_DOCUMENT_TOKEN_TO_BE_REPLACED

Somewhat to my surprise, yesterday afternoon I found myself enjoying live music in the actual physical presence of the musicians creating it for the ...
[2 images] END_OF_DOCUMENT_TOKEN_TO_BE_REPLACED

There is some good news for Wes Finch fans awaiting the release of his Leap Year gig live album (as (p)reviewed in this magazine last month) He has ...
[1 image] END_OF_DOCUMENT_TOKEN_TO_BE_REPLACED

Some six months ago, I wrote what to date is my penultimate live review for the magazine: concerning Wes Finch's Leap Year gig.
[1 image] END_OF_DOCUMENT_TOKEN_TO_BE_REPLACED