‘Seven Signs of a Soul' by Ian Todd 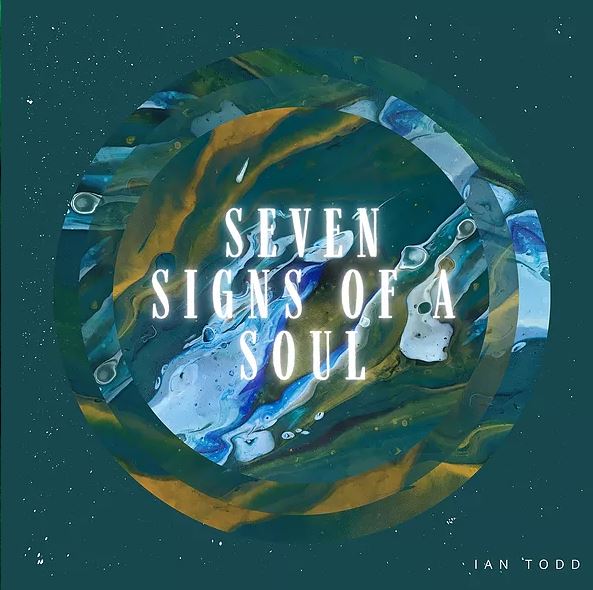 As prophesised in our recent reviews of his singles "Don't Forget To Breathe" (in June) and "What Goes In Is What Goes Out" (last month), the third solo album by Ian Todd, namely ‘Seven Signs of a Soul' is released today: following its predecessors 'Groaning Up' and 'Bohemian Hymns'.

In addition to those two tracks, the set contains another five which you will not have heard previously: "Movement Towards Motion", "Sense of Sensitivity", "Grow", "Made Yourself To Be" and "Feed the Good Self".Written by Ian, he also produced the album and performs the vocals plus most of the instruments, save the saxophone which is courtesy of Kirk Hastings (check out Kirk on ‘Hot Music Live Presents Volume Three' with his own "Withering") and double bass which is played  by John Parker (most recently on HMLP with The Mechanicals Band & their adaption of Phillip Larkin's "Trees" on Volume Five).

You might perhaps, if that is your inclination, think of the album as conceptual inasmuch as the seven tracks each relate to a sign of life (mostly overtly referenced in the titles), though these are merely the surface concerns of the matryoshka songs, the unpacking of which reveals further and deeper engagements with both abstract & introspective topics such mental health, stoicism and consumerism.

However as I have said in reviews of Ian's work before, high concepts and a general refusal to sit inside someone else's arbitrary box of expectations does not, by any means necessarily equate to a lack of accessibility. There is on every track an open musicality: Ian's mission statement remains the creation of "immersive songs to soothe the soul" and unless the listener is admitted to his sonic world in the first place and not discouraged at its borders then it's hard to see how that immersion can take place. On the other hand please don't take this as an indication that what you get is not so some degree challenging nor that it could be middle of the musical road. There is a great wit and imagination in the composition and virtuosity in the performance with a myriad of details to eventually pick out & enjoy throughout the collection.

It's probably preferable, for your ease of reading, that I steer you towards my previous reviews of the two tracks already released: I stand by my individual comments upon them as stand alone items, though I must say that they acquire an extra layer of meaning when heard in context & sequence.

Of the new five, album opener "Movement Towards Motion" is a bold yet decisive choice. A long song, it has the time to be many things during its duration, but starting a collection with something vaguely redolent at times of the Velvet Underground at their most avant garde (think maybe of "The Black Angel's Death Song") conveys much trust in your audience: though this curious track does oscillate back & forth between such a sound and more melodic elements. It made me think of movement across the sea: a voyage of differing experiences, some queasy and generating mal de mer, other moments more tranquil in nature……

This song is followed by "Don't Forget To Breathe" (qv) and subsequently "Sense of Sensitivity":  a track which lives up to its title. Initially agonisingly slow (you occasionally wonder if the next note is coming or not), it builds into a cool, spacey jazz vibe, sustained by one of John's most dreamy bass parts augmented periodically by stabbing guitar chords, pattering percussion and classy little sax interventions, not necessarily when you most expect them. Among a set of songs which reward listening beyond often "difficult" passages, this is one which definitely can capture more broad attention.

"Grow" follows: by now something of a pattern for this album is emerging. Again the song begins in icy tranquillity with instruments managing to add as much as possible through the least playing possible. If the first song brought to my mind possible parallels with the Velvet Underground's first two albums, "Grow" maybe has its VU reference in the limpid beauties of their third one. However, the start is not the whole song and this one suddenly explodes into something pretty groovy & driving in its middle section before relaxing back into where it came from.

"Made Yourself To Be" varies the offering, beginning straight away with an upbeat approach: almost marching band in the drumming particularly. This makes sense given the lyric and sentiment and is another of the most radio friendly on the album, though I hope that most first time listeners are as taken by surprise as I was by the sudden interpolation of electronica part way through an otherwise fairly jazzy song (albeit one where the sax sound is processed) and towards the conclusion, we get instrumental squalling of quite a disturbing form to keep us safe from complacency.

After "What Goes in is What Goes Out" the album concludes with "Feed The Good Self", a gentle summation of the whole and potentially the collection's very own synecdoche. For let's not lose sight of the overall theme as we look at the components. Ian is urging many different but complementary modes of living our lives better upon us. It's a sort of musical handbook for improving our physical, mental and emotional selves & I thank him for this. This one is a cool jazz style again, but with the trademark insertions of the unexpected.

So is ‘Seven Signs of a Soul' Art? Well yes it is. Ian Todd is an artist and works across several media including very creative collaborations with others. Check out the sleeve art on the singles & album (the latter being originally one of Ian's own pieces which Emilié Cotterill of Transluceo, who takes all his promo pictures, then transformed into what you see next to these words) plus the recently released video for "Don't Forget To Breathe" (https://www.youtube.com/watch?v=KrW7sIzDvpY)  courtesy of Diana Stefanescu  (Dikira Art)

Yet it is also a sort of self help manual in two ways: you can listen to what Ian's singing & follow his advice and you can just immerse yourself in the album and allow it to act as an aid to mindfulness. It works: I've tried it. You can almost certainly dance to it too, though I've not tried that myself. I'll leave that to you.

These are exciting times to be Ian Todd: not only is he letting us hear this new solo album but the band he is best known for being a member of, Shanghai Hostage, are re-emerging onto the live scene again (check them out "Beneath The Trees' on Saturday 28th August in Naul's Mill Park, Coventry) , he has joined another of the hottest local bands around, The Upsiders, on a formal basis & as for his Sacred Toffee project with fellow Hostage Sophie Hadlum, well you'll just have to await their debut in this magazine.

Sadly, my live reviews for 2020 & 2021 have been disproportionately outnumbered by my reviews of releases (and let's not forget the last word of ...
[3 images] END_OF_DOCUMENT_TOKEN_TO_BE_REPLACED

The time is rapidly approaching (16th of July to be precise) when "What Goes in is What Goes Out", the sophomore single from his ‘Seven Signs of a ...
[2 images] END_OF_DOCUMENT_TOKEN_TO_BE_REPLACED

Having reviewed "Hour Glass" (an hour long ambient piece ) by Ian Todd last summer, I am now pleased to say that I can return to his work again, this ...
[2 images] END_OF_DOCUMENT_TOKEN_TO_BE_REPLACED

Keen readers of this magazine will recollect the February feature  of Ian Todd & even keener ones will have spotted his name amongst the details of ...
[1 image] END_OF_DOCUMENT_TOKEN_TO_BE_REPLACED

We cover so many multi-talented artists in "Hot Music Live": not just musicians but the photographers, visual artists & producers whom they work with.
[1 image] END_OF_DOCUMENT_TOKEN_TO_BE_REPLACED