"2 Tone and Rock Against Racism" event 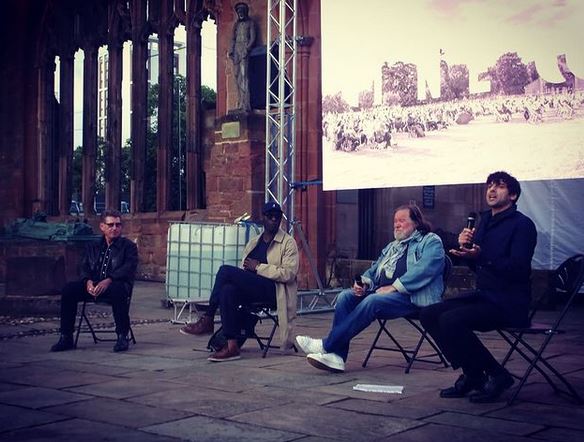 In my recent review of the "Women Pioneers" event at Coventry Cathedral, I drew your attention to its companion event centring on the 2 Tone movement, Rock Against Racism and their roles in combating the rise in racism in the late 1970s. I was fortunate enough to attend that last evening.

Held this time in the ruins rather than inside (they were so lucky with the weather given the conditions earlier in the day), again it was put together magnificently by Helen Wheatley and her team as part of the Resonate Festival which she directs.

The films this time were the 1980 BBC "Arena" film "Rudies Come Back, Or the Rise and Rise of 2 Tone", a Tyne Tees "Alright Now" programme of the same year hosted by The Selecter and featuring superb (& unseen for 40 years) live performances by themselves and the Bodysnatchers plus "White Riot", Rubika Shah's award-winning film charting Rock Against Racism. I'm sure I've recommended the latter to you previously, but I do so again. I'd certainly do the same with the two TV shows, though unfortunately they are rather harder to see except at special events of this kind. The first two wholly and the latter partially were footage of the times and so brought an authenticity to the proceedings that mere hindsight talking heads could not: key members of the 2 Tone and RAR movements were recorded in the midst of creating them and of course we viewed them through the filters of knowing what came afterwards: the successes to some degree in attitudinal changes but also the awareness that however well intentioned and passionate they were, the struggles are still very far from over. Sitting in the middle of Coventry, it was hard not to feel pangs of nostalgia watching footage of long gone landmarks from the two television films and seeing the incredible energy and excitement of gigs of that time (both had superb Specials live action).

In the middle, author Daniel Rachel (and once again I'm sure I have recommended his superb book on these times & issues "Walls Come Tumbling Down": if you haven't read it yet, you ought to) chaired a panel discussion with Roddy "Radiation" Byers of the Specials (no stranger to this magazine), Jeff Perks who made the "Arena" film and Mykaell Riley whom you'll know  best from Steel Pulse but who also appears in "White Riot" and is Director for The Black Music Research Unit and Principal Investigator for Bass Culture Research at the University of Westminster.

As with the previous event, it was a boost to hear a panel being chaired so effectively with no ego nor diversions into showbiz anecdotage. The subject matter was kept firmly in focus & though I personally experienced that era, many of the revelations were eye opening, if chilling (you can possibly imagine what being in a black reggae band touring with white punk bands was like but in fact it was worse), not least samples of the underlying racist attitudes which helped sustain the problem: Jeff revealed that unlike today, "youth culture" was not welcomed at a BBC focused on the Proms and the subject matter he was trying to film which we now consider as fascinating and vital social history was sneered at as "gutter culture". However he did have the final word of the discussion and it was an important observation as to how he, as an objective observer, saw the movements the films were capturing as being a positive response to the evils of racism rather than trying to match them for negativity.

We are so lucky to have someone locally with the vision and the skills to put on events like these: to me listening to the records and attending the gigs always have been & always will be the main part of my engagement with music. However occasionally, music does spill out into the wider world, engage with difficult realities which impact upon the musicians and their audiences alike and try to effect change for the better. I learned a great deal through my involvement with 2 Tone and RAR and it was & remains an important aspect of who I am. I think much the same can be said for everyone else who did likewise. It was good to be reminded of those times & great to discover details I never knew, but the most vital part I think of such events is both to remind ourselves that these are not purely historical movements of archive and nostalgic interest but live and ongoing ones and to help raise awareness among younger music lovers with consciences that there is a backstory and that models from the past may be of contemporary value. I'm sure that is why Helen put it on & why her four guests supported it. There wasn't a trace of smugness in retelling what they had done, but a clear and continuing commitment to the values of 40 or more years ago, and like the very best musical performances, I think audiences recognise such values and integrity and respond all the more to it.

Fresh out from The Specials is a new album called ‘Protest Songs 1924-2012'.
[1 image] END_OF_DOCUMENT_TOKEN_TO_BE_REPLACED

Just to remind you that if you have not yet visited Coventry Music Museum's amazing & extremely popular temporary exhibition, "On Bass, Sir ...
[1 image] END_OF_DOCUMENT_TOKEN_TO_BE_REPLACED

I'm delighted to bring you a heads-up on a rather special musical event which I'll be reviewing for the magazine next month.
[1 image] END_OF_DOCUMENT_TOKEN_TO_BE_REPLACED

Saturday night was another real landmark for me: my first Saturday evening out since the pandemic struck.
[1 image] END_OF_DOCUMENT_TOKEN_TO_BE_REPLACED