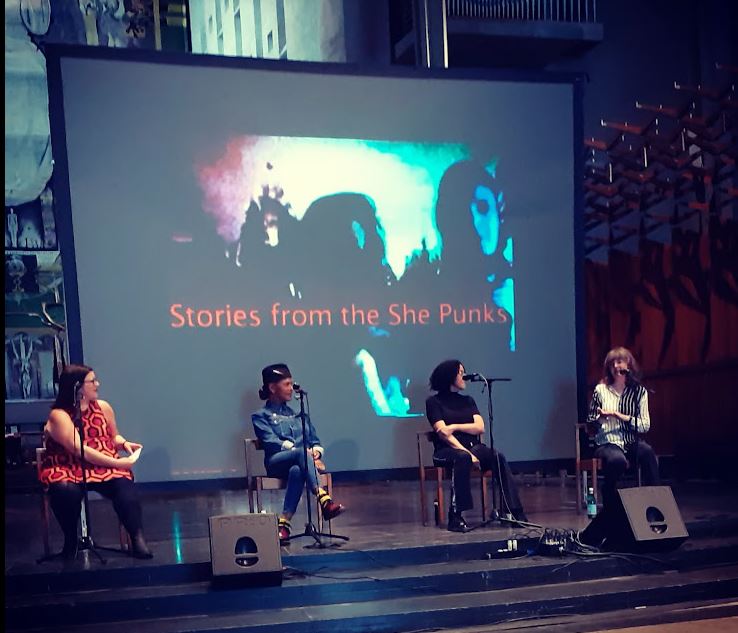 Saturday night was another real landmark for me: my first Saturday evening out since the pandemic struck. Thankfully, not only was it an excellent evening & well worthy of a review, but it harked back to two previous reviews.

Some three years ago, I reported on the "Remembering Coventry: Ghost Town Haunting #1" event at the Shopfront Theatre in Coventry (which included some excellent music related gems rescued from various archives), organised by Helen Wheatley.

Nearly a year later, I also told readers about a screening of the "Stories From The She Punks" film in Leamington: a documentary on pioneer female musicians from the punk era produced by Helen McCookerybook of the Chefs/Helen & the Horns and Gina Birch of the Raincoats.

Tonight, Helen Wheatley (whom I'm delighted to report is now Professor of Film and Television Studies since my last report) put together an evening at Coventry Cathedral as part of the Resonate Festival (of which she is Director) which included another chance to see this great film.

The focus was on pioneering women in music, with especial reference to the punk & 2 Tone movements and as such featured an initial discussion and Q & A with Pauline Black of The Selecter, Rhoda Dakar of The Bodysnatchers/Specials and Helen McCookerybook which Helen Wheatley led herself  as the planned chair Jennifer Otter-Bickerdike  had unfortunately had to isolate. Sign of the times….

What struck me about the quality of this part of the evening was how different it was to so many of the similar ones I've sat through (and in some cases endured). This one seemed quite short (or maybe I just wanted it to go on longer) but they packed a great deal in. Firstly it was uplifting how the ego of the interviewer did not intrude (as they often do) with succinct, to the point questions. Secondly, while the responses were clearly thought out, they also evaded the traps of simply telling us what we expected to hear and quite frankly thereby reinforcing increasingly stagnant mythologies. There was much humour, but also clear explanations of the issues faced by women involved in music especially in the 1970s era and reference to the broader lives and cultures they had to contend with. So much to do with 2 Tone and punk has been recycled ad nauseam but I was delighted on how much came out which was fresh & new to me: the general theme I guess of the whole event was that we were hearing stories both from the platform & on the films which had not been heard before and which had been swamped by those of male participants in the music concerned.  This evening sought to put this right as best it could & it certainly succeeded. Showbiz anecdotes were not in evidence: the nearest we got was Rhoda citing a phone call from Carl & Suggs of Madness inviting her to drop everything and pop round to help write songs. To Ibiza. Not the easiest option for people with other responsibilities and it worked well to illustrate the different pressures applying to male & female musicians. Equally, I guess the rather mainstream query from the floor to cite influences might have been expected to draw radical feminist credentials: instead we got pure honesty and the replies "Mick Jagger" (Pauline), "Bowie" (Rhoda) and "Linda Lewis" (Helen). Lazy audience expectations were thus confounded. Perhaps this very different sort of discussion is a gender issue itself… that's one to ponder over.

"Stories From The She Punks" followed the discussion and although I'd seen it before, screened in such a space & on a much larger screen, it had extra impact (I'd never heard the bass of "Oh Bondage Up Yours" have the resonance we enjoyed on this occasion). My comments on this excellent film (please do try to catch one of its special screenings if you can) stand from my previous review, though as always with such experiences, you pick up on bits you didn't notice as much before. As noted above, the film really does give voice to many people who simply have always been ignored by film makers putting together documentaries on punk (who virtually always concentrate on men) and Helen M in her introduction made the point of how delighted they all were simply to get the chance to tell something of their stories for the first time. Interviewees included Helen & Gina themselves, Palmolive & Viv Albertine from the Slits, Vivien Goldman,  Jane Woodgate & June Miles-Kingston from the Mo-Dettes, Ana da Silva from the Raincoats, Hester Smith & Rachel Lovell from Dolly Mixture, Lesley Woods & Jane Munro from the Au Pairs, Gaye Black (the Adverts),  Lucy O'Brien from the Catholic Girls, Karen Yarnell (the Gymslips),Trash (Ettes), Liz Naylor (the Gay Animals),  Enid Williams from Girlschool (the one real exception to the punk definition in the film)  & Shanne Bradley from the Nipple Erectors.  The film is a product of Helen's book "The Lost Women of Rock Music Female musicians of the Punk Era" which I thoroughly recommend if you want to explore these stories in greater depth.

The evening concluded with a showing of "Sisters with Transistors" (Lisa Rovner, 2020, 90 mins): the hitherto untold story of electronic music's female pioneers, including Clara Rockmore, Daphne Oram, Bebe Barron, Pauline Oliveros, Coventry's own Delia Derbyshire, Maryanne Amacher, Eliane Radigue, Suzanne Ciani, and Laurie Spiegel. Whereas the first film was composed of entirely contemporary interviews with no archive footage, this one reversed the polarity (which probably was essential given that it generally charted a much earlier timeline). Again, the voices generally have been lesser heard (and certainly most were revelations to me) and covered the global scene rather than the UK one alone.  I'd been waiting to see this film & am grateful I had the opportunity to do so now.

Credit not only to those already mentioned but to the rest of Helen's team on the night. A crucial aspect for me (and most of you I'm sure) is a sense of safety at events, without which I doubt I could derive any enjoyment whatsoever. They, plus the Cathedral team, had set things up excellently (the space made that easier) and so social distancing was observable & observed. They even managed to rustle up water for the audience when the advertised wet evening turned out to be a hot & dehydrating one instead. Thank you. My only regret was that subsequently I learned there were people in the audience I knew but had not spotted due to masks..

There is a companion event to this one on 8th August in the Cathedral ruins called "2 Tone and Rock Against Racism", which focuses on the rise of 2 Tone in the late seventies and early eighties and puts this in the context of the wider Rock Against Racism movement. It will feature screenings of "Rudies Come Back, Or the Rise and Rise of 2 Tone" (BBC2, 12/3/80, 40 mins), a documentary from the BBC archive about the scene and "White Riot" (2019, 84 mins) Rubika Shah's award-winning film charting Rock Against Racism. I've seen both & can highly recommend them. Guests include award winning author Daniel Rachel, Roddy Byers (The Specials), Mykaell Riley (Steel Pulse / White Riot contributor) and Jeff Perks (director of"Rudies Come Back….."). I have my ticket already.

If you like music documentaries, you might also look out for the Rock 'n' Docs shows at The Tin with CineCov: "Rock ‘n' Docs #1: Our Hobby is Depeche Mode (Posters Came from the Walls)" is on August 6th and "Rock ‘n' Docs #2: Sound it Out" on August 13th.

What a beautiful evening's entertainment & soul sustenance of original music at the Tin.
[5 images] END_OF_DOCUMENT_TOKEN_TO_BE_REPLACED

I'm delighted to bring you a heads-up on a rather special musical event which I'll be reviewing for the magazine next month.
[1 image] END_OF_DOCUMENT_TOKEN_TO_BE_REPLACED

In my recent review of the "Women Pioneers" event at Coventry Cathedral, I drew your attention to its companion event centring on the 2 Tone ...
[7 images] END_OF_DOCUMENT_TOKEN_TO_BE_REPLACED