"My Phone" by Hannah Woof 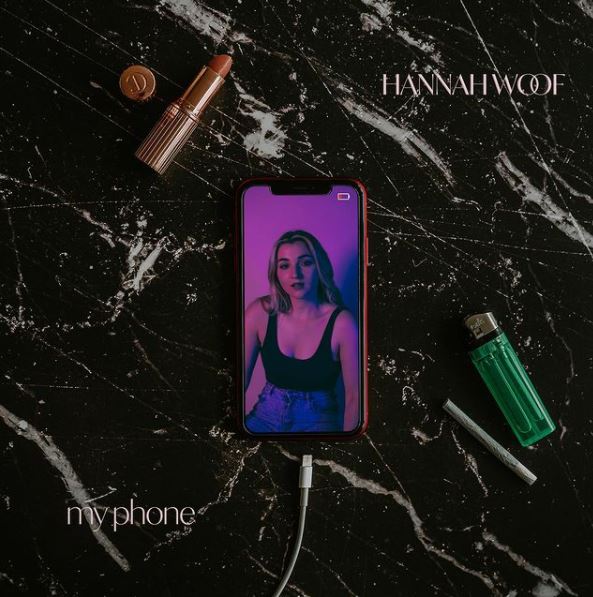 During the last sixteen bizarre months or so, coverage of Coventry & Warwickshire artists in these pages has taken on unusual patterns.  Several names have been very prominent as they have found ways to keep on making and sharing their fine music, others have made more occasional appearances (some I'm pleased to say for the first time) and others, previously regularly covered, haven't featured at all. One such, whom we've not mentioned since our review of her single, the startlingly prescient "Self Care" which came out in March 2020 as the pandemic first hit the music scene, is Hannah Woof: however very thankfully her follow-up, "My Phone" is out today.

As you might imagine with an artist of this calibre, although she has been off our radar for a year and a quarter, her imagination has not been dormant in that period and she re-emerges in very fine form indeed.

Some aspects of her craft and identity remain gratifyingly in place: the trademark Hannah Woof feistiness & sassiness are still there as is the incisiveness of her lyrics: Hannah never pulls her punches with those. Her characteristic wit is also to the fore: the single's title derives from an analogy which I've never before heard used in a song to capture a sense of having had enough of something or someone..

What has however evolved is the sound these words accompany. We can, I think, trace this development back to her ground breaking single of November 2019, "Sweet Talk" (which you can also sample on ‘Hot Music Live Presents Volume Two') wherein we first saw her departure from earlier tracks which were characterised by what I once described as "very fragile & haunting songs played with a very very spare style".

Written with Jack Arnold and Danny Connors (and Jack produced the song too), "My Phone" has a much denser and contemporary arrangement than those spectral tracks & the fragility has evolved into a vocal tenacity and assertion to match the lyrics (which were often very feisty regardless of the musical framework).

That characteristic Woof articulacy is certainly all present and very correct and despite the months which have elapsed, none of her powers have disappeared in that time: quite the reverse. As Hannah herself told me "It feels so refreshing and uplifting to be back recording music. The space between "Self Care" and "My Phone" has felt so humongous but has also given me an opportunity to fall in love with writing and recording again."

Some things are well worth the wait & "My Phone" is definitely one of them. It may have taken a while, but building anticipation in one's audience is no bad thing and Hannah has previously shown a great care to spend time to get things right on record. Compelling & quite intoxicating, this new single is prime Hannah Woof in so many ways, yet another step along an evolutionary road for her work which will lead her goodness knows where.

Sharp eyed readers may also have noticed Hannah's ongoing creative relationship with photographer Emilié Cotterill of Transluceo and her work graces the single too: as indeed it does for Ian Todd's latest ("What Goes in is What Goes Out") which we reviewed earlier this week. It's good to learn that other professionals such as producers, engineers and photographers who work with musicians are slowly coming back into public view. We wish them all well for getting up and running again and sustaining their businesses.

You can check out the video for "My Phone" which Emilié created at:

A mere few hours ago, on the stroke of midnight in fact, Hannah Woof released her new single, the zeitgeisty "Self Care", her first since her equally ...
[1 image] END_OF_DOCUMENT_TOKEN_TO_BE_REPLACED

I wrote last week of the issues & tensions which must exist around even the best artists as they develop their individual voice & sound yet need to ...
[1 image] END_OF_DOCUMENT_TOKEN_TO_BE_REPLACED