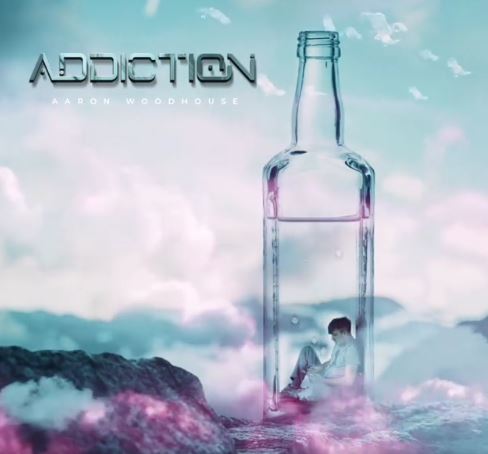 I last reviewed Aaron Woodhouse back in March when he released "Fire In The Air" as a single: now, he has followed it up with "Addiction" which is out today: a deeply thought provoking song based on own fifteen years of addiction & trying to turn his whole life around in the years since then.

Produced by Daniel Williams (who has previuously worked with Fernquest and Starvz), it certainly builds upon Aaron's very rapidly growing reputation (his is a name I keep on hearing talking to others part of the local music scene and the local media and one cropping up played on a variety of local radio stations) and his range of collaborations such as his Warwickshire County Council commissioned COVID9 themed track "Raise The Awareness" and others in the pipeline.

It's difficult to see any of Aaron's work as being separate from his own life, circumstances and beliefs: they clearly inform and drive his desire to communicate via music and give his tracks the emotional honesty which is what divides the best music from the self indulgent. That said, obviously "Addiction" is particularly personal for him and so can easily be seen as a culmination of what he has been building up to this far in his relatively short career to date. It's certainly his most powerful and hard hitting song thus far released and it's going to make listeners sit up and think about what he's telling us.

It's hard hitting for sure, but as with his earlier work, Aaron does not achieve success in getting his message across through aggression in his music: as I've said before he has a trademark melancholic style (to which you can add compassion and empathy for his subjects) and so his work, including "Addiction" is easy to understand and achieves its purpose (the excellent video which accompanies the single reinforces this really well). There is much sorrow as well as anger on display. The clarity of the arrangement and production too play important parts in the effectiveness of the communication.

I'm not sure precisely where Aaron will go next (though I'm looking forwards to finding out) as "Addiction" may be both his signature tune for stating who and where he is as well as the pinnacle of this early part of his career: possibly freeing him from the need to be autobiographical so much of the time and start factoring a range of other stories within the same humane perspective.

You can check the video for "Addiction" out here: https://www.youtube.com/watch?v=LKxMsJsYdho

A very recent addition to my awareness of the local music scene has been Aaron Woodhouse.
[1 image] END_OF_DOCUMENT_TOKEN_TO_BE_REPLACED