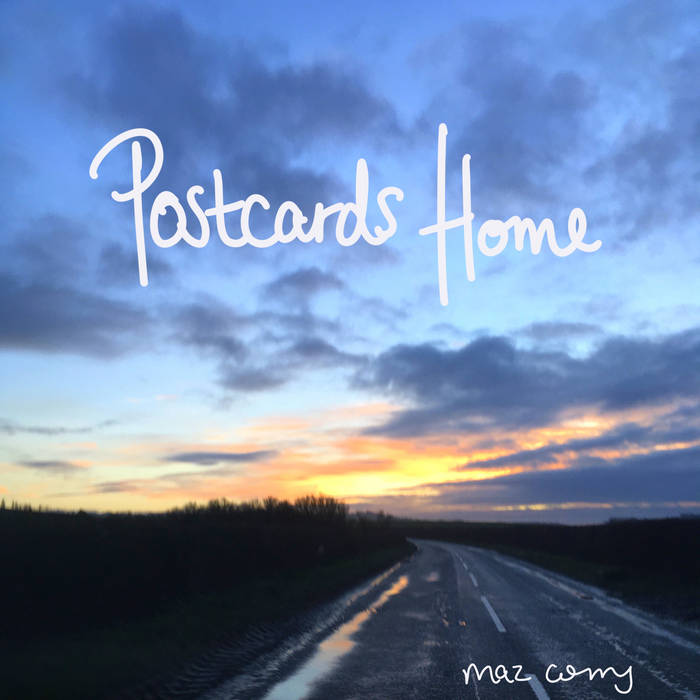 Good morning to you all: I'd like to tell you today about the new album from Stratford based Maz Corry,  ‘Postcards Home' which was released a couple of weeks ago.

Another example of how people have adapted to the constraints, Maz has managed to create this with the help of collaborator Simon Kemp (albeit via remote recording) during the past year.

Inevitably the results have therefore been influenced by the circumstances in which the songs were  conceived: firstly by the themes of our current situation shaping the lyrical ideas & secondly by the open & sparse arrangements due to the recording constraints. Regular readers will already be aware of my preference for the "less is more" route anyway (I think it showcase strong writing better & allows the elements of each song to linger & take root in our perceptions) so it won me over, but it's worth considering that Maz probably would have gone down such a route anyway (albeit probably with different songs), An essentially solo performer, it would have been somewhat curious had she decided to overdub too many instruments which were unlikely to feature in her gigs (when these resume) and the result I think holds her truthful & sincere ideas up with clarity. However, that said, the interplay between Maz & Simon (who does play live with her too) is extremely effectively.

Before looking at the seven songs on ‘Postcards Home', I think one more key item of context worth considering is that Maz has only been writing & performing in this way for two years and in that respect reminds me of Chloë Boehm in how quickly each has hit such high levels of creativity & respect: Maz's previous musical activity being theatre based. Look out too for her debut EP ‘The Distance Between Us' (which came out just over a year ago) and her April 2020 charity single "Then There's You" (which raised funds for Mind).

The latter offers something of a clue towards the compassionate & humane ideas Maz puts across in her songs: she sees the current human condition, understands it, has empathy for it & offers hope & support.

"In This Living" which opens the album  is a beautiful & melodic song with gorgeous guitar figures & sets the tone with her voice high in the mix, sounding pure & cool & asking  very essential questions which I am sure many of us are currently posing too.

"Once" is a much bluesier number in terms of the musical setting (keening steel picking & slide parts meshing together) with a folk melody laid over it: an interesting combination.

"The Last Thing I Ever Do" offers a more traditional blues vocal take: an ethereal pastoral take on the genre with a traditional "take me to river" theme, gentle with plenty of space to let the lament marinade effectively.

"She" takes us to a different musical setting, with a flamenco approach: much space again in the telling of a rather dark tale: certainly one of my favourites in the collection.

"Pirate's Lament", despite the title isn't a sort of sea shanty but probably the most contemporary sound on the album: an acoustic ballad again, but without any obvious debt to folk or blues genres & possibly the most accomplished lyrics on the album.

"The Waiting" brings us back to more familiar folk orientated territory though again the sound is modern (I liked the harmonised vocals which offer a different sound to other tracks and the harmonica added distinction to the arrangement) while album closer "When The World Was Ours" is a really powerful way to take our leave. Haunting dynamics enhance a timeless (though surprisingly short) tale which while not speaking directly of our own times, nevertheless has potential metaphoric potential to do so, offering a nostalgic hindsight to better days as it does.

All in all, this is a very strong & commendable (I certainly do commend it to you) album & yet another performer whom I look forward to catching live at some preferably relatively imminent date.