"Ghosts of Christmas" by Alchemista 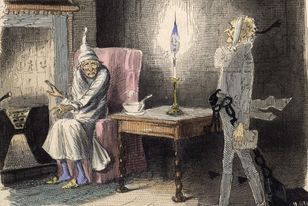 Relatively hot on the heels of October's ‘Clear Skies To See' EP (certainly rapid by the standards of what is possible in 2020) Alchemista have crafted "Ghosts of Christmas" as a festive single for us.

In order to share it with us in a timely fashion, they are currently releasing it on YouTube & Facebook for the time being & in order to record it at all, the song is based around vocals, guitars & keyboards only.

Not that you can tell: the arrangement sounds very full & I spotted what I assumed was an oboe before I was put right on that point. The song fits right into the Alchemista trademark of leaning towards the otherworldly (you probably guessed that from the title) and all the more welcome for that (a reviewer does get a little overloaded with Christmas singles going on about sleigh bells etc. It's very refreshing to be presented with another perspective altogether).

Of course the song has roots in the classic Dickens tale (with traces of M R James & Poe adding to the atmosphere) and the overall sound reflects this with that intricate gothic arrangement I mentioned evoking all sorts of feelings from fear to melancholic hindsight with what sounds like massed strings & that plaintive "oboe" line. Written largely by Paul Jayes (their keyboard player) with input from Caroline Luxton-White (lead vocals): their first collaboration, and with regular producer Aaron Clews providing remote assistance via Zoom, "Ghosts of Christmas" has a timeless, classical style: one might call it operatic and one might also wonder how it would fit into the canon of Kate Bush: rather neatly I suspect. Certainly quite a long way from a rock song as such.

This is a very classy release & certainly greatly superior in artistic & emotional terms to much of the seasonal material you're presumably hearing on the radio right now. Look out for the video at https://www.youtube.com/watch?v=SwmTtc7jMpI&feature=share&fbclid=IwAR2S_VY57l2HCdsQiJLrl1xxW-xcHFXok331LOGKrnFGTh-y2spIxBTJgy4

It was last April that Alchemista were last able to put together all their considerable talents and release the rip roaring pirate themed single ...
[1 image] END_OF_DOCUMENT_TOKEN_TO_BE_REPLACED

For their first single release of 2021, Alchemista are offering us a tale of piracy on the high seas in the form of "Calico Jack".
[1 image] END_OF_DOCUMENT_TOKEN_TO_BE_REPLACED

I really hope that like me, you enjoyed the popular track "A Place To Hide" on ‘Hot Music Live Presents Volume Four'? If you haven't ...
[1 image] END_OF_DOCUMENT_TOKEN_TO_BE_REPLACED