"Heading Home" by The Upsiders 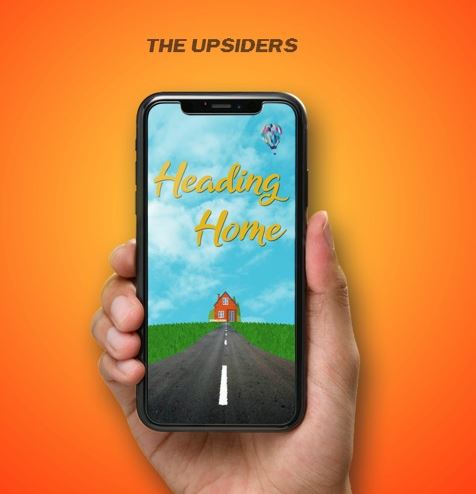 I feel a little sad now we suddenly find ourselves at the penultimate instalment of The Upsiders' "Reconnect" project: today's new single "Heading Home". I've been following the emotional adventures of Kenny since "Worth A Million" came out back in July & it has been impossible not to become emotionally attached to his journey & rooting for him. It will be a strange moment when the saga concludes.

There is also a strange sense of synchronicity working in the local music scene: to be telling you about a song with this title only a month after writing about Rob Halligan's latest  album with such a similar title reminds me of last year when we had a number of artists simultaneously writing about oceans & the sea. It must mean something…

In fact, although both Rob & The Upsiders would have conceived of their songs & titles before COVID19, the concept of journeying & returning home is not unknown in popular music, especially for writers trying to make more profound points, yet they gain extra resonance when the entire global population, artists & audiences alike are being taken on an involuntary journey together.

Kenny's journey was clearly not conceived as a parallel to our current one, yet the idea of exploring emotional highs & lows on a quest for meaningful reconnection to other humans is surely what we are all yearning for at the moment? Paradoxically of course, while the band are trying to warn us about over-reliance on electronic devices for communication & aiming to wean us off them in favour of deeper interactions, it has been electronic media which has been keeping us in touch for many months now. In fact my entire engagement with "Reconnect" has been over the ether (I've not heard any of it live yet) and so has been my sharing of it with you. Ironic eh?

So we find Kenny on the final laps now, "Heading Home". Once again the band have stretched their musical sinews & offered us an eighth successive variation in terms of style with the help of producer Matthew Cotterill.  A characteristically perky number (when are they never upbeat at some point in any track?) which in form is somewhere near a Billy Joel style piano led pop ballad, it bounces along with the help of a jaunty bassline (not an instrument which has been as prominent on recent episodes) and drumming and despite the very compelling competition of the previous seven tracks, is probably the most pop orientated of the collection to date & may therefore gain more mainstream airplay: at least I hope it does.

This is not to say that the lyrics are entirely optimistic. As with the songs charting Kenny's lower points, all of which managed to include at least sections of more upbeat music as the band counterpointed moods, again they play with offsetting the tone of the sound with words which still manifest elements of uncertainty, doubt & lack of clarity. It seems that the story has yet more to reveal in its final chapter….

So here we are, as we always knew we would be, at the final instalment of the "Reconnect" project by The Upsiders, the single "Intermission" which ...
[1 image] END_OF_DOCUMENT_TOKEN_TO_BE_REPLACED

Today, we reach episode seven (of nine) in the "Reconnect" project of The Upsiders: "Bobbie Boat".
[1 image] END_OF_DOCUMENT_TOKEN_TO_BE_REPLACED

Now we are in the heartland of The Upsiders' "Reconnect" project, not only are the cumulative emotions of the arc of protagonist Kenny's ...
[1 image] END_OF_DOCUMENT_TOKEN_TO_BE_REPLACED

I do hope that you have been following successive instalments of The Upsiders "Reconnect" project as they release them & we review them in the ...
[1 image] END_OF_DOCUMENT_TOKEN_TO_BE_REPLACED

I must have been a bit naive when back in late March I assumed that my articles in the magazine would become more infrequent: obviously there has ...
[1 image] END_OF_DOCUMENT_TOKEN_TO_BE_REPLACED