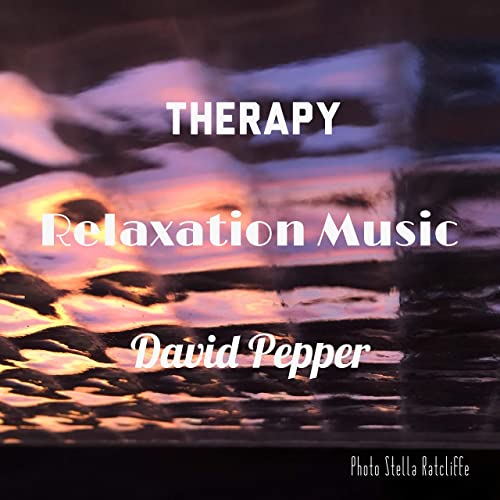 As usual, starting a Dave Pepper review with a list of his musical projects & genres mastered would in itself make an article too long to hold your attention to the end. Suffice it to say that some years ago, if pushed, I'd have suggested that he had ticked most of them off, and then I heard him play an exquisite flamenco piece he'd written: and this was some time before he moved to Spain where he is currently based.

Now he has released an album of yet more musical variations on his very considerable body of work:  very appropriately entitled ‘Therapy', he self describes it as "soothing and relaxing music, yoga music, ambient.." and he is certainly correct in this.

Most of the individual tracks have been granted single status over the past few weeks: you may remember my review of the first one, "Tranquilo" last month & knowing the others would appear on the album, I have held back further comment until this opportunity.

That first release had its roots in an intended soundtrack composition: I'm not sure if any of the others had similar beginnings, but it is clear that somewhere along the line Dave conceived of a collection which did many things: I guess it stretched his own musicianship still further (and Dave has always been a restless, nomadic artist who has never been complacent enough to rest on his considerable laurels) & it certainly seems that ‘Therapy' is his gift to us to help us through these difficult times. Finally, I suspect that creating it had therapeutic value for Dave himself.

The songs are long ones again territory Dave has seldom entered before: whatever style he was worked in, the songs have tended to be punchy & shorter. On ‘Therapy' they range from just under five minutes (by far the shortest) to nearly nine. Each theme is explored fully (he must have enjoyed this aspect) and last long enough to fully work on us: mindfulness is the target here & that requires immersion in the sound & that's what we are offered.

Although we get plenty of his excellent guitar playing, we have strong reminders that Dave also played keyboards in several of his best loved bands & the songs are multi-layered, multi instrumental affairs with plenty of internal variations of tone & texture & detailing.

Although "ambient" is possibly the best genre description to use, you can hear all sorts of quotations from & allusions to the music of a variety of global cultures. There are eleven tracks in total: the afore mentioned "Tranquilo", the title track, "Meditation", "The Trade Winds", "Sea Air", "Sunset & Wine", "The Coming of Spring", "Dreamstate in Lapland", "Dawn Till Dusk", "Delusion"  and "The Closing" and each generally is entitled along the lines of the aural picture it aims to paint.

This is a generous gift from him & hopefully it will work its magic & charms upon all who listen to it (I think the collection probably works best being played right through as a whole). Lord knows we need it. Thanks Dave.

Following the raunch of his most recent release from earlier in the month, "Rub Rub Grind", Dave Pepper is back with his new single "Don't Stop.
[1 image] END_OF_DOCUMENT_TOKEN_TO_BE_REPLACED

I got pretty excited in these pages recently as Dave Pepper turned the clock right back on his sound with that excellent song "I Need More Time": ...
[1 image] END_OF_DOCUMENT_TOKEN_TO_BE_REPLACED

Out today from Dave Pepper is a new song called "I Need More Time" .
[1 image] END_OF_DOCUMENT_TOKEN_TO_BE_REPLACED

The latest release from Dave Pepper is called "The Calm" and is now available for you too to enjoy via this link: https://davepepper1.
[1 image] END_OF_DOCUMENT_TOKEN_TO_BE_REPLACED

Given the overwhelming feeling of claustrophobia engendered by the current situation, it is a corrective to share evidence that we are not all hemmed ...
[1 image] END_OF_DOCUMENT_TOKEN_TO_BE_REPLACED

In terms of the tracks on ‘Hot Music Live Presents Volume One', some were great tracks from today & others rare & unreleased gems from some of ...
[1 image] END_OF_DOCUMENT_TOKEN_TO_BE_REPLACED