"Tumbleweed And Dust" by Cary L


"Tumbleweed And Dust" by Cary L 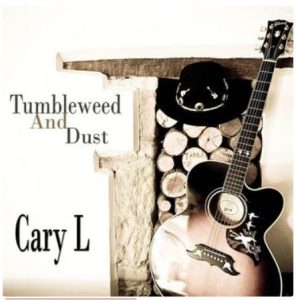 It's proving a year when most of our expectations have been torn up & scattered on the winds. Back in March, I had little or no idea what, if anything, I'd be writing in "Hot Music Live". If my initial pessimism thankfully has been proved off the mark, one thing remains true & that's the thrill of the postman knocking on my door as he did yesterday with a totally unexpected new album: in this case ‘Tumbleweed And Dust' by Cary L (Cary Lord) whom I last reviewed here more than two years ago when she released her excellent album ‘Only The Night Knows'.

Naturally a new collection of songs (and this is excellent value at 14 tracks) by such an artist is always a pleasure to listen to, but this one is extra special. Begun pre-pandemic last October with Jake Ingermells adding his drumming to Cary's bass, the recording sessions had to stop when a break for producer Josh Ingermell's  wedding was followed by lockdown (although Cary's vocals were added in between). Subsequent social distanced & remote collaboration has enabled the set to be completed & various other parts added: acoustic & electric guitars by Cary, Steve Giddings with slide, pedal & lap steel and dobro, the McMillan Brothers flew in banjo, fiddle & harmonica from Nashville, Josh provided keyboards on one song & Cary (like so many other musicians recently) acquired a new skill and so was able to contribute ukulele parts. It's fascinating that in the space of only a couple of days, I've twice reviewed records featuring parts played in Nashville (see my review of "2 AM Call" by the Rising for the other example).

Obviously the shadow of COVID19 hangs over the entire album, but what does make it really special is the effect of the loss of Cary's younger sister Tess in 2019 and this I think really defines "Tumbleweed And Dust". There is one song which specifically relates to this ("No-One (Song For Tess)") which is based upon a letter from her. However most of the set frankly could address the issue in one way or another & this raises it to a new level of meaning & emotional impact.

The general sound is a country rock one, Cary's defining career styling, but in this case deliberately steering away from the more "pop" aspects of this style on her recent records into something rootsier & what better genre is there is express loss, heartbreak & melancholy? It really does work terribly well at hitting home.

Cary drew, as she often has done, on the many original (and largely unrecorded) songs written by her father (Sonar Records/Cabin Studios founder) Jon Lord with Graham Wale & given her name as an additional writing credit, clearly worked on them all to make them her own. She has a very long history of association with very well crafted yet often unusual original material, avoiding clichés, from her days with L'Homme De Terre, Armalite, Indigo Lady, She's The Leader & of course Blush & what you get on this album is the same: carefully written & arranged, telling its story well & honestly. A couple of the songs date from years back: "Hours & Minutes" & "Wildest Dreams" and it is a testament to Cary's perfectionism that she is happy to wait over 30 years to nail a song as she hears it in her head before releasing it.As I said, you cannot fail to be moved by the honesty and beauty of these songs: it is difficult to play through as a collection as sometimes you need to stop and absorb the message of certain tracks before moving on. Everything works: the highly tasteful arrangements & spot on production bring out the essence of each song & I'm glad Cary's always truthful vocals sit so prominently on top of the mix: as they should do.

Clearly "No-One (Song For Tess)" is the track which immediately draws one's attention given what we know its subject to be, but songs such as "Kiss Goodbye "are as magnificent as anything she has ever recorded & make one wonder why Cary has waited until now to record in this style: it just works so well & suits her equally so. I do hope she continues in this vein.

My next intention was to pick out my favourites from among the other songs on the album. Unfortunately I failed in this because at the end of that little exercise, all I had done was simply list every single song I had not previously mentioned. It really is that good a collection & it really did have that level of effect on me. I'll tell you them anyway, for your information, but please do not think that I consider any of them better than their fellows nor that I prefer them. It's one of those faultless "no filler albums". The other track titles thus are "Gotta Get Out of Here", "Movie Star", "Homebound", "Hours and Minutes", "I Hurt Back", "Care For You", "ReRun", "Wrote Your Name On A Broken Heart", "We Belong", "Make It Alright" and "Writing's On The Wall".

‘Tumbleweed And Dust" comes out on 23rd October both digitally & via hard copies from the Sonar Records Bandcamp page. "Kiss Goodbye" will be the first single from the album and please also check out the video to "No-One (Song For Tess)" at https://www.youtube.com/watch?v=wt4GsULtSBo

This album was clearly wrought with much love & in that spirit, I commend it to you.

"Only the Night Knows" by Cary L

Cary Lord's musical career has touched the lives & ears of a great many people, even if her name is scandalously less known to some of them.
[1 image] END_OF_DOCUMENT_TOKEN_TO_BE_REPLACED