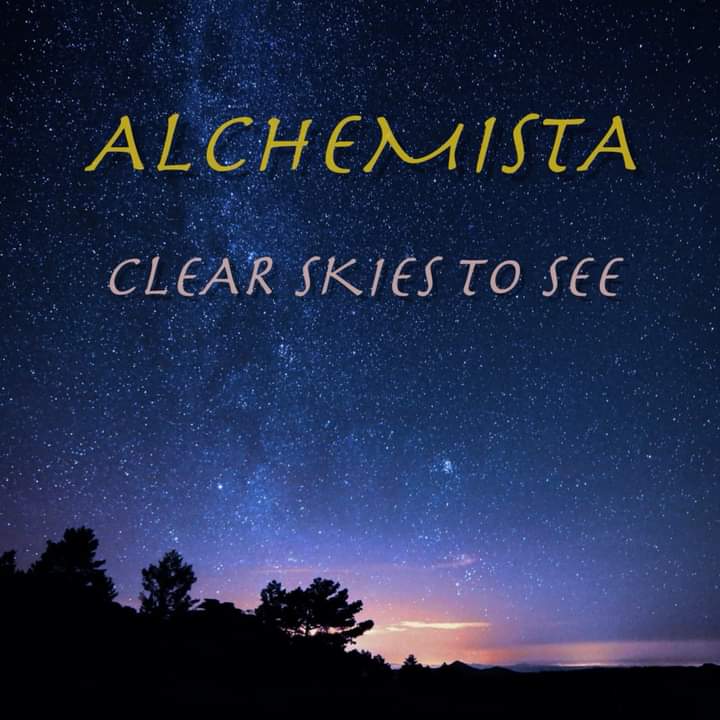 I really hope that like me, you enjoyed the popular track "A Place To Hide" on ‘Hot Music Live Presents Volume Four'? If you haven't heard it yet, I recommend that you check it out at: https://hotmusiclivepresents.bandcamp.com/track/a-place-to-hide

That song originally appeared on Alchemista's EP 'On The Morrow'  which was released earlier this year & now, defying the limitations of our times, the band are set to release its follow up, 'Clear Skies To See' on 14th October.

Alchemista (who comprise Caroline Luxton-White (vocals & backing vocals), Pete Garelick (guitars & backing vocals), Colin Halliwell (drums) and Paul Jayes (keyboards, guitars and lead vocals on "Jewels On An Ebony Sea")) along with bassplayers Derek Smith and Mark Nisbet (each of whom played on two songs) worked with engineer Aaron Clews at Daybreak Studios with Caroline & Colin taking responsibility for the production. Generally started pre-lockdown, the group managed to ride the waves of frustration during the era of constraints (plus a change of bass player) to complete the record and such is the current sense of achievement and momentum that they are already looking forward to record yet more, once Aaron is released from his current local lockdown.

And so to the songs…. The intriguingly named "Like Danny DeVito" is written by Caroline and apparently "loosely based" on Colin. To be precise, the analogy with the famous actor is to his role in the film, 'Ruthless People' and is  (I'm told) "about a similar kind of guy who pretends to be upset when his girlfriend goes away for the weekend, but then spends the weekend partying".  It would be hard not to warm immediately to this song: quirky & humourous it possesses the most "pop" sensibility on the EP & I would hope it will get the airplay it deserves. Bouncing along upon a largely keyboard led melody (with flashes of guitar to add character & bite), it's good to hear "proper" well thought out lyrics & made me realise how the narrative song is perhaps a little neglected these days in favour of introspection, so thank you Alchemista for reviving it.

"Don't You Let Him In" is another Caroline song and is both EP closer and a radio shortened version  of a song from 'On The Morrow', increasing the impact by omitting both initial sound effects and the lengthy coda: to good effect I think as what is left packs a weighty punch. Much more darkly dramatic than "Danny DeVito" and hence a good contrast, this track veers closer to their expected "melodic rock" house style with a more operatic approach both musically and vocally. The subject matter too is heavier & in this instance I'm afraid I have no idea who the model might be.

The other two songs, namely 'Jewels on an Ebony Sea' and 'When You Go To Sleep' sit in the heart of the record & are composed by Paul and share with the afore-mentioned "A Place To Hide" a vampire theme….The former is (mainly) a duet between Paul & Caroline (pretty much simultaneous rather than separate lines for the most part) and much lighter in tone than the subject might suggest: in fact it is more about the notion of sanctuary than anything else & hence has a generally very uplifting effect. In fact had I not known that it predated lockdown, I'd venture a guess that it might be a metaphor for our current circumstances (I confess I'm actually over prone to hear such in so much I'm currently reviewing, but isn't it a characteristic of good songs that they can convey a range of possible meanings to a range of listeners?).

'When You Go To Sleep' (the third in sequence) is the quietest & most contemplative of the set. A ballad, if Alchemista audiences wave lighters in the air, it might be to this one. Again, the vampiric theme is mitigated by a sense of refuge (in this case lost in slumber), as with all the songs on the EP, there is a very generous streak of humanity & empathy running through it.

Alchemista are definitely a band unlike any others around here currently & I recommend their classic songwriting & playing style to you. The tracks are admirably clear & you can appreciate both the excellent vocals & often very subtle instrumental touches. Above all, the songs have very clear meanings & have obviously been wrought with care, intelligence & love. May their new recordings happen as soon as possible & may they, like everyone else, get back out there soon doing what they most enjoy doing.

It was last April that Alchemista were last able to put together all their considerable talents and release the rip roaring pirate themed single ...
[1 image] END_OF_DOCUMENT_TOKEN_TO_BE_REPLACED

For their first single release of 2021, Alchemista are offering us a tale of piracy on the high seas in the form of "Calico Jack".
[1 image] END_OF_DOCUMENT_TOKEN_TO_BE_REPLACED

Relatively hot on the heels of October's ‘Clear Skies To See' EP (certainly rapid by the standards of what is possible in 2020) ...
[1 image] END_OF_DOCUMENT_TOKEN_TO_BE_REPLACED