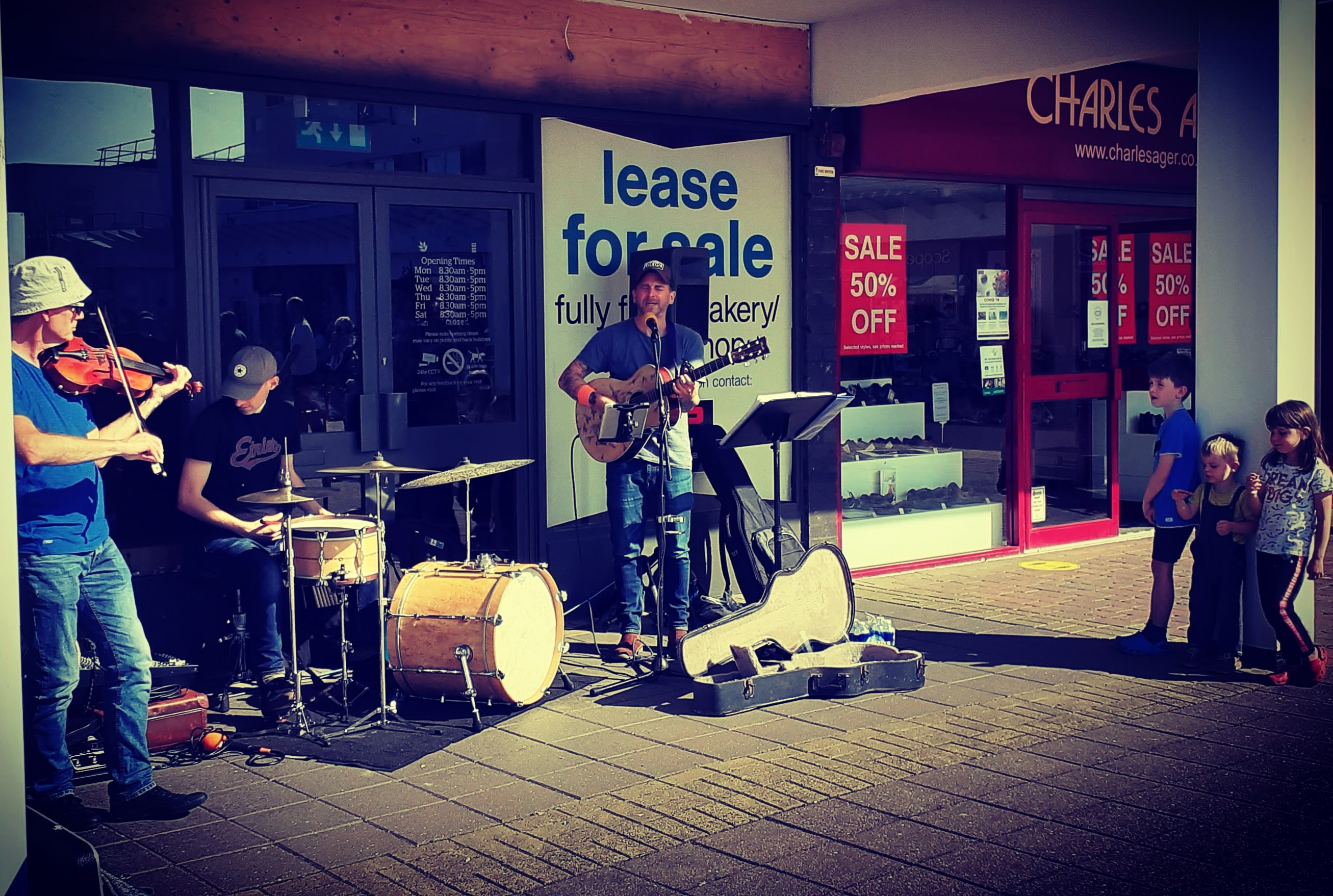 Somewhat to my surprise, yesterday afternoon I found myself enjoying live music in the actual physical presence of the musicians creating it for the first time since March 14th. Billed as the Doc Brown Trio, Wes Finch's outlet for his covers work, it actually turned out to be an essentially originals set, which was appropriate given that the concert was part of the Kenilworth Arts Festival and took place  in the open air (with good potential for social distancing) in the town's Talisman Square. No doubt in different times, the same gig might have been hosted indoors, it was good to see it happen at all with the weather smiling on proceedings and very positive responses from the crowd who were also visiting the adjacent art fair. In fact, given the number of families & young children present who might not have attended an indoor, ticketed gig, it is arguable that the performance as it took place, was more effective in introducing a new audience to Wes' music. It was good too to see faces I'd not seen in the flesh for many months such as HotMusicAl himself & Wes' Mechanicals Band colleague Katrin Gilbert. It was good too to see Kenilworth Arts Festival engaging with local music now as in earlier days this had been less the case.

Playing with Wes were his Doc Brown/Mechanicals colleagues Jools Street and Ben Haines &  Liz Crowley joined them on vocals for some numbers.  Ironically all of these had also played at the penultimate live gig I'd attended back on February 29th.

What can one say about the music? It was pretty ideal for the company, the occasion & the weather & I hope it's not too fanciful to say that band & audience to some extent responded to a sense of partial liberation, albeit (at least as far as I go) with a sense of who is near you or approaching close to you that had not really been my experience at previous concerts. The setlist had a slight overlap with that for Wes' Leap Year gig (look out for the live album in the final stages of preparation) and seemed chosen for the mood: uplifting for the most part but with threads of reflection & blues. As I say, the band played with the professionalism you'd expect but the looseness of people with the shackles taken off for an afternoon at least. Maybe one should be grateful under the circumstances for any live music at all: however I'm not sure I'd have gone along myself for a merely token exercise so the quality of the performance, the material, the sense of being in company (good company at that) to enjoy music & the feeling that people are adapting & finding ways to play & hold modified Festivals despite all the current constraints, transcended the mere "gigness" of the occasion. It was a special moment. I wonder when the next one will be for me?

If you are an admirer of the visual artistry of Russell Whitehead or the musical artistry of Wes Finch, or indeed of both as I am, then I'm sure ...
[1 image] END_OF_DOCUMENT_TOKEN_TO_BE_REPLACED

I'm sorry to say that I'd never previously attended one of the summer Sunday afternoon concerts on the Bandstand in Stratford before but ...
[7 images] END_OF_DOCUMENT_TOKEN_TO_BE_REPLACED

Very slightly more than twelve months ago I reported to you on Wes Finch's Leap Year gig: a special event to mark the four yearly occasion & to ...
[1 image] END_OF_DOCUMENT_TOKEN_TO_BE_REPLACED

There is some good news for Wes Finch fans awaiting the release of his Leap Year gig live album (as (p)reviewed in this magazine last month) He has ...
[1 image] END_OF_DOCUMENT_TOKEN_TO_BE_REPLACED

Some six months ago, I wrote what to date is my penultimate live review for the magazine: concerning Wes Finch's Leap Year gig.
[1 image] END_OF_DOCUMENT_TOKEN_TO_BE_REPLACED