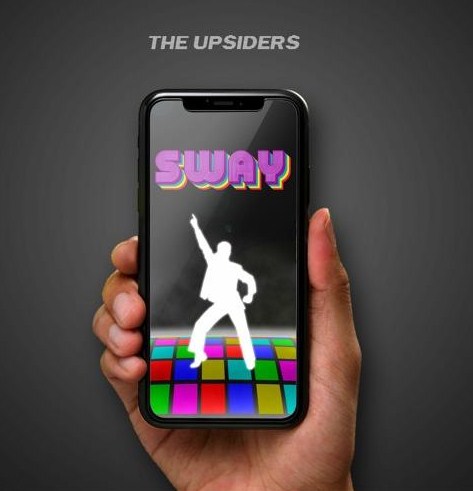 It was barely a fortnight ago that I was telling you all about The Upsiders' single "Worth A Million" which I'm delighted to see has been welcomed as warmly by so many other people as it was in this magazine. Hot on its heels however, almost before we've redrawn breaths on the subject, the band have released its follow up, "Sway" (or to be accurate they will on Friday), being the second instalment of their "Reconnect" project which I briefly outlined in my earlier article.

Moving the narrative forwards from the first part which celebrated everyone's inherent & equal value in society, in "Sway" the protagonist of the sequence, "Kenny" is invited by the band to a "disco funk party" as part of his journey "to form genuine connections with the world around him". And what better place to do so than at a party? (I'm sure the irony of releasing songs about parties isn't lost on any member of the band nor their audience. Call it something to look forwards to maybe).  Equally who'd want to miss an Upsiders party? So many people we review in these pages would make great party guests & hosts but it's tricky to think of a local band more suited to putting one on with their well know joie de vivre.

If "Worth a Million" was an interesting fusion of various uplifting & sunny vibes & styles, "Sway" reflects its specific subject matter in being a typically uninhibited blast of well, you guessed it, funky disco music.  You can safely say these chaps like to party & even better they clearly want their guests to enjoy themselves as much as possible: as much as they do. After all, if "Kenny" is to be helped, he will need nights out like this with others pitching in for him.

They can party well but they can also play well: funk doesn't ever sound easy to play convincingly, especially when giving it this light & breezy vibe over the top, but they carry it out with aplomb. What I found particularly interesting was how the song reminded me less of classic transatlantic disco & more of the late 1970s/early 1980s "Britfunk" scene (think Light of the World, Hi Tension, Freeez, Linx, Junior Giscombe etc) which is very refreshing as this sort of music isn't often referenced any more.

As delightful & soul revitalising as its predecessor, "Sway" advances the plot delightfully while remaining in its own right another one which will get you onto the dance floor with Kenny & get you moving your bodies when you hear it live. In the meantime, please look out for the music video (created by Nathan of the band) premier on YouTube at 6pm on Friday.

So here we are, as we always knew we would be, at the final instalment of the "Reconnect" project by The Upsiders, the single "Intermission" which ...
[1 image] END_OF_DOCUMENT_TOKEN_TO_BE_REPLACED

I feel a little sad now we suddenly find ourselves at the penultimate instalment of The Upsiders' "Reconnect" project: today's new single ...
[1 image] END_OF_DOCUMENT_TOKEN_TO_BE_REPLACED

Today, we reach episode seven (of nine) in the "Reconnect" project of The Upsiders: "Bobbie Boat".
[1 image] END_OF_DOCUMENT_TOKEN_TO_BE_REPLACED

Now we are in the heartland of The Upsiders' "Reconnect" project, not only are the cumulative emotions of the arc of protagonist Kenny's ...
[1 image] END_OF_DOCUMENT_TOKEN_TO_BE_REPLACED

I do hope that you have been following successive instalments of The Upsiders "Reconnect" project as they release them & we review them in the ...
[1 image] END_OF_DOCUMENT_TOKEN_TO_BE_REPLACED