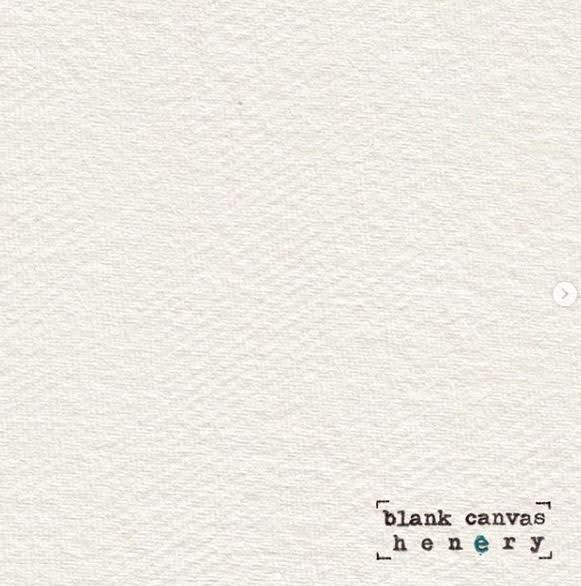 I really haven't concealed my admiration for the solo work of Henery in this magazine have I? Starting with live reviews which not only revealed how arresting a performer he could be live even without the rest of The Ellipsis but also the breadth & depth of his own original material, to the first three singles releases of his individual career, I think I have made my thoughts very clear.

Henery recorded eight tracks with that great producer John Rivers at Woodbine Studios thankfully before lockdown, though regrettably that latter phenomenon has prevented his promoting any of his releases to date live. May that change soon.

First up in February came his debut "In The Moment", then came "Little Brave" in April & last month we were given "To The Sun" for our pleasure. I hope you read the reviews of each in "Hot Music Live".

All three are very present & very correct on today's debut album ‘Blank Canvas'. However, since I am certain I covered all three very fully in my previous reviews, I trust you'll not mind if I consider them as read & focus instead on the additional five tracks, which are named "Bad Company", "Copycat", "Magic Fades, "Symmetry" and "White Feather".

Well firstly, there are certain things which hold true for them all: the sheer quality of all aspects of writing, production & performance (in addition to Henery's own singing & playing, bass and drums are courtesy of Eddie Hewitt).

Somewhere in the production process, interesting decisions have been made: from my experience of his live sets, Henery has considerably more than eight songs worthy of being recorded, so I imagine others are already earmarked for future release & the decision was made to limit the number of songs on ‘Blank Canvas' to increase the impact of each upon us listeners & to let us savour them the better.

"Bad Company" shares with the earlier singles that catchy memorability that they all demonstrate (though frankly this applies to everything I've heard from him to date), built on a tasty if discreet guitar lick & progressing on a breezy tune borne by that instrument & enthusiastic drumming with plenty of light & air left in the mix by John, so that however compelling the playing is, it's Henery's distinctive vocal which predominates. And rightly so. A story of very mixed emotions towards another, it is one of the ones which stood out first time I heard it.

Another such is album closer "White Feather", another rather baroque number like "In The Moment". In this intense ballad with gorgeous guitar work, John & Henery have worked together to create a somewhat different vocal sound to excellent effect: absolutely not artificially processed but offering his individual singing yet in subtly original tones. This could make another great single: though I could make a case for every track to be honest.

"Copycat" is much more driving a number (though nothing on the album approaches full on rock) and as such adds variety to the set (the running order clearly is something that has received considerable thought) and I really liked the guitar solo.

Track five is "Magic Fades": another really intense number with Henery producing an anguished vocal set against appropriately edgy & restless instrumentation: this one will I'm sure be a live favourite once audiences get to hear it.

The final song for comment (although it is really the penultimate track in terms of running order) is "Symmetry": a stately dance of a song, with captivating images in the words and unusual soundscapes (cymbals sizzle throughout for example).

I think prejudging albums isn't very good for any reviewer & having certain expectations can set you up for all sorts of reactions, but in this case I knew from a long time before hearing it, let alone knowing the title, that this album would be faultless & a really strong start to what hopefully will be a long & glorious solo career. It's good to be proved right, but don't just take my word for it, please go & listen (and buy) for yourselves.

One of the many disappointing aspects  of lockdown (and I write this on a day when I would otherwise have been anticipating Leamington Peace ...
[1 image] END_OF_DOCUMENT_TOKEN_TO_BE_REPLACED

In February (and how long ago that feels today), I had the pleasure of telling you about "In The Moment", the debut single by singer-songwriter ...
[1 image] END_OF_DOCUMENT_TOKEN_TO_BE_REPLACED

I first reviewed Henery & his music for "Hot Music Live" eleven months ago when I saw him  supporting Ellie Gowers: "Henery was a revelation.
[2 images] END_OF_DOCUMENT_TOKEN_TO_BE_REPLACED