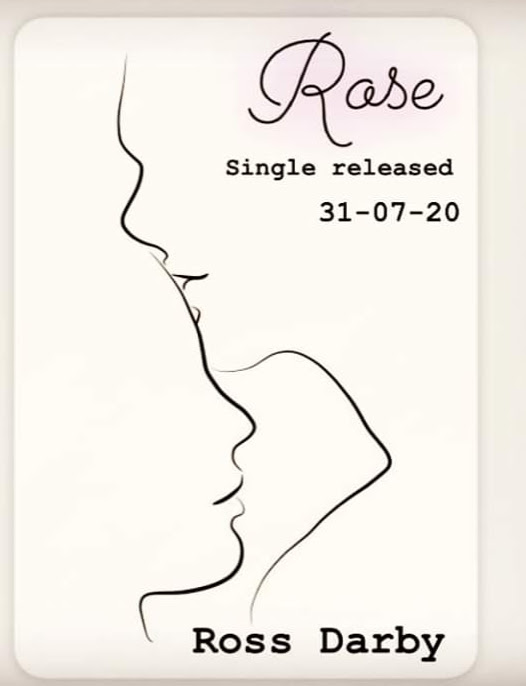 When I reported mere days ago that one of the artists who had recently been recording at 14 Records with Matt Waddell was Ross Darby, I certainly looked forwards to hearing the fruits of those sessions.

What I didn't quite expect was to be reviewing one of them quite so soon, though I'm delighted to be doing so as I can't get his new single "Rose" out of my head (though repeated plays probably helped that state of affairs).

To be released on the final day of this month, "Rose" is a remarkable track. In purely its own right, it demonstrates how rich the talent currently around us continues to be. Even up against some of the other marvellous tracks I've already reviewed in 2020 it stands up as one of the finest. Without all these wonderful songs I can assure you'd I'd not be inspired to write for "Hot Music Live" nor compile "Hot Music Live Presents" (indeed the latter would simply not be possible).

However to create this at a time when recording has been most difficult & minds turned to many other things, especially when like Ross you have been heavily committed  on the medical frontline yourself, verges on the astounding. And the outstanding. Moreover to write something this emotionally uplifting within such a context when you'd be forgiven for tending towards the introspective is something else again.

Because "Rose" is just that: a real tonic for the troops.  No doubt that's entirely his purpose, to lift us when we need it & I thank him for that as it does that for me. Written between shifts sweltering in full PPE in operating theatres, the song in no way reflects the angst its composer must have been going through.

Based upon a simple acoustic riff which worms its way straight into your mind, it sounds utterly timeless to me: in fact I remarked to Ross straight away that it reminded me of the sort of traditional tunes we used to hear played on pianos in school: think Percy Grainger & his "English Country Gardens".

A story as old as time (he assures me that it's not autobiographical nor from his family) which fits the melody like a glove, telling of love, race tracks, elopement, steam trains, flowers in a young girl's hair (the girl's name is a nice echo) & Gretna Green looked back on from old age after loss. Sweet & bittersweet at turns it could have been written any time in the last century or more.

The icing & cherries on the cake are the utterly tasteful interludes of violin (by fellow Fallow Neil Pointon) which mesh beautifully with the guitar & voice & add to the overall feel, which is enhanced by perfect production. I think you'll like the song as much as I do & it certainly seems well fitted for radio playlists.

It's been a couple of years since Ross' ‘Down the Rabbit Holes' EP which was reviewed in the magazine, so it's great to hear new material from him: to have something this great under the circumstances & when we need it is even better. I also understand that he has more material ready to record so we can look forwards to more releases before too long.

Today is the release day for the new Ross Darby single "Around This Town", his first since the much applauded "Rose" which came out in July 2020 and ...
[1 image] END_OF_DOCUMENT_TOKEN_TO_BE_REPLACED

I am a big fan of the performing & writing of Ross Darby so it was a big pleasure to get another chance to review him for this magazine on the ...
[2 images] END_OF_DOCUMENT_TOKEN_TO_BE_REPLACED

It is a real privilege & pleasure to be able to review the new EP by Ross Darby entitled "Down the Rabbit Holes" which will be released on Friday ...
[2 images] END_OF_DOCUMENT_TOKEN_TO_BE_REPLACED

A whole lot of great news just in from Ross Darby I'd like to share with you.
[1 image] END_OF_DOCUMENT_TOKEN_TO_BE_REPLACED