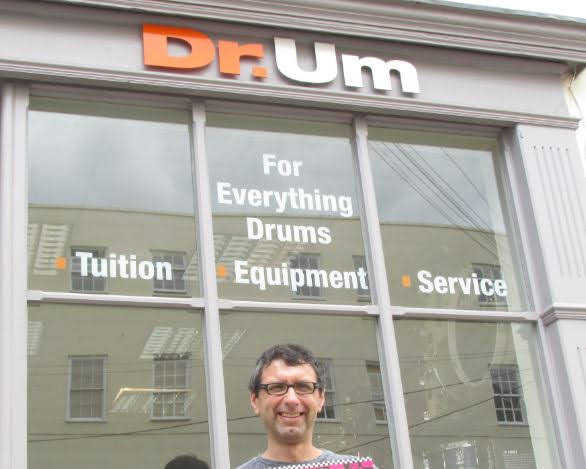 Back in March, I shared some of my reflections, fears & thoughts about the impact of lockdown on the local music scene & more or less left it on a point of "we'll have to wait & see". Since then I have tried to report such stories as are possible under the circumstances, largely releases of music which we are fortunate to have had recorded before, or occasionally during, the restrictions, plus a few articles on the responses & wisdom of artists.

The general intention was to focus on the positive: the continuing quality of local music & the perspectives of those who could add insight to what many were experiencing. I felt little point in merely reciting negatives which are pretty much known to & understood by many, since by so doing, anxieties (which impact on so many, and in some cases to health threatening degrees) are stoked.

Today I'm reporting on how one music centred business has been coping & how its owner sees the landscape as restrictions ease.

Now situated at 18 Regent Street in Leamington, Dr.Um actually opened on 29th May 1999 around the corner in Portland Street: or rather beneath the street (a position which became untenable in wet weather). Mathematicians will have worked out that had it not been for lockdown, the business would have celebrated its 21st birthday last month: a huge pity, especially to one lucky enough to be at its 10th birthday party in 2009 at the Bridge Theatre when Doug Wimbish & Will Calhoun of Living Colour presented their project "Head >>Fake": you can imagine how exciting that was.

As well as selling drum kits, parts, accessories & other percussion related items to everyone from children beginning to play to top flight professionals (many of whom have been known to drop in when playing locally & many a gig has been saved by Dr.Um being able to provide emergency assistance), the business is also the thriving hub for a great deal of tuition for players of all levels.

Dr.Um himself, the shop's founder & proprietor Victor Guillamon (a highly talented & experienced drummer whose own live performances come far too infrequently for this writer) was telling me today about how this tuition has been the morale booster for him & his team since March. Teaching online, they have managed to carry on this side of the work to great effect & he is delighted at how well it has gone & particularly the feedback, especially from the parents of younger players. He feels that it has been a really purposeful way of spending what would otherwise be a highly frustrating time & has boosted the well being of those being taught (and teaching). Rather to my surprise, apparently drum exams have taken place both online & more recently at local venues & several of his students have passed onto new grades: which again is uplifting for all concerned.

With the easing of restrictions, Dr.Um are looking forwards to restarting lessons on the premises, so if anyone wants to book themselves in, or book online lessons in the meantime or who wants guidance on taking exams, they should contact Victor now at www.dr-um.com

Sales have been less easy to adapt given the preference of potential customers to browse in a physical shop, but the good news is that the shop has reopened on Fridays & Saturdays (subject to responsible practice under current circumstances) or if you can't attend on either day, Victor will meet you there by appointment. For those unable to get at all for whatever reason (and currently they can be so many), you can email him and request an order of anything from new kits to the sticks & heads which are getting broken & worn during all the practice people are doing.

Victor is one of the most optimistic of people but as we turned our discussion to the future even he expressed concerns that the lack of clarity & the almost total uncertainty over a timetable for restoration of live music was one of the most difficult aspects for people to get their heads around: be they part of the business aspects, the performers or the audience members: he was reluctant given this to forecast when gigs might resume.

Nevertheless he picked out several positives from the past few months to share with our readers: the progress of students as  noted above, key moments such as the reopening of the large 14 Records rehearsal space and some of the regular live streams:  he particularly cited those of fellow drummer Kev Stanley & of Fi Smart & Alex Thompson (the Jazz Apples).

So what is Dr.Um's prescription? He urges people to keep up their practising, expanding their repertoires and skills both to enhance their sets when gigs start again and in the meantime to get a sense of fulfilment & achievement in the enjoyment of simply playing.